France In The Crosshairs And In The Rearview

November 14, 2015
We have only been home from France six weeks, but we can feel the pain and horror of yesterday's terrorist attacks acutely because we walked those streets and saw those places and enjoyed all the people we met on our tour to find the world of Vincent van Gogh. 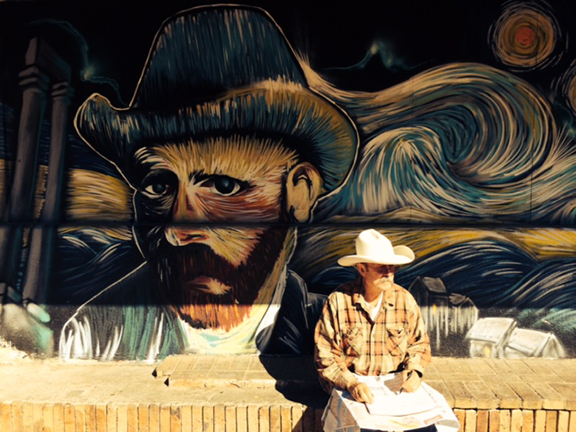 BBB sketching in Arles in the south of France.


We saw glimpses of the tension that has been ramping up since the Charlie Hedbo massacre last January. Especially on the trains: on our route from Nuenen in Holland to Antwerp and Brussels, and then on to Paris, we experienced delays after a guy locked himself in the bathroom of a train in Rotterdam and a SWAT team came in to take him down. All the lines were affected. It's not PC, but I admit to being uncomfortable around certain foreigners, and when you're on THE train that the three American kids took down the terrorist on, and Middle Eastern people come down the aisle with sun glasses on, well, my mind went straight to, "What will I do if this dude pulls out an AK-47?" Just east of our apartment in Paris, there are numerous Middle-eastern stores and the streets are crowded with knots of Arab looking men, smoking and conversing on the corners and in the cafes. And this is the area where most of the attacks took place yesterday. I definitely felt an unease when we walked in these neighborhoods and I have a hunch we walked by at least one of the victims or the perpetrators.

About ten years ago, my son Thomas turned me on to Eagles of Death Metal and I have always liked their funky, garage band style. I have about five of their tunes on my iPhone. That it was during one of their shows on Friday evening that the terrorists attacked their venue as a "soft target" brings it home as well. 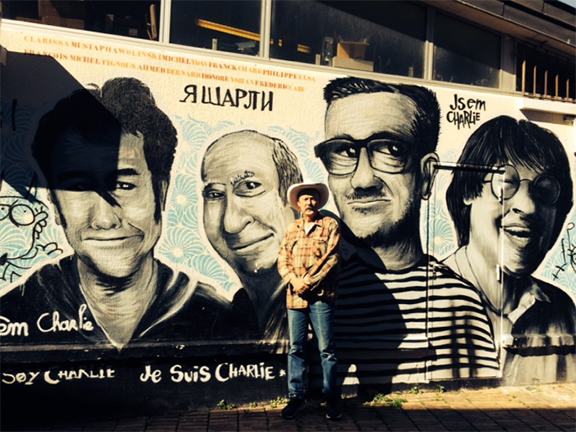 Members of my tribe: the cartoonists who died during the Charlie Hedbo massacre. This mural is in Arles in the south of France.


When we were in Paris in September, all the major sites, like the Notre Dame, the Eiffel Tower and the Louvre, patrolling military squads of three and four men, with machine guns and full-on military gear walked through the crowds. I admit to being unnerved when a DSL delivery van (shades of Oklahoma City and Timothy McVeigh) sped right up to the barricades in front of the Notre Dame cathedral and a suspicious looking guy jumped out and ran into the church. It turned out to be an actual delivery, but I have to admit to being on edge for a brief moment. These were small incidents to an otherwise wonderful trip, but nonetheless, the tension was there and I can only imagine what that tension will be like now.

"You think if this happened you would run or defend yourself against the men, but these things just happen and then suddenly you can't move."
—Pierre Bertin, 36, who survived the Batacllan concert massacre on Friday night