Who Invented "The Doorway Shot"?

November 28, 2015
When one door closes, another opens. Such is life, especially when it comes to art. 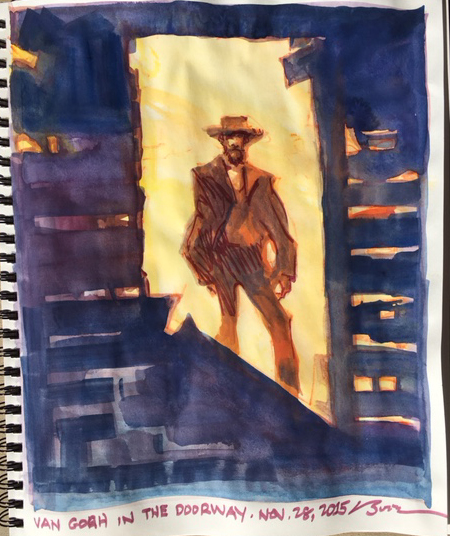 Daily Whip Out: "Van Gogh In The Doorway"


Thanks to my friend and fellow artist, Allen Fossenkemper, I got to see this wonderful collage of "Doorway Shots" inspired by the Western film master John Ford, who did the original framing in "The Searchers":

One of the comments at the end of the clip says something to the effect that John Ford wasn't all that original because when you go out on a set to film, the concept of the doorway shot—shooting through an open doorway—comes naturally to the director. And, this, of course is total B.S. because before Ford did this NOBODY had ever even thought of using it. Why would you set up a shot in the dark, shooting out a doorway, essentially a frame within a frame? That is just stupid, the old time filmmakers reasoned. That is, until an artist, thinking counter-intuitively, comes up with it, which brings us to the old saw about creativity and originality: first they laugh at you, then they get mad and then someone who they think is cool tells them it's cool and from that point on, it's always seemed self-evident. Or, words to that effect. Yes, it seems evident now, but it was genius at the time Ford first utilized it. A frame within a frame. Such a simple concept and nobody had done it before Ford.

All of this dovetails into the artistic efforts of Vincent van Gogh. His paintings seem crude and amateurish to us, but they are anything but. The whole and its parts are held together by contrasts. When he started doing this, nobody thought this was even painting. In the end, he gave everyday objects deeper meaning. And if you study his paintings and get past the surface you will find he is looking through a doorway at something else. A frame within a frame. Good advice for all of us, but we know where all that leads.

"When a man gets too old to set a bad example, he starts giving good advice."
—Old Vaquero Saying