November 9, 2015
It's always a hoot-and-a-half to find deep spec authenticity. For example, I am intrigued by a line in one of the 800 letters Vincent van Gogh wrote to his brother Theo. The year is 1885 and Vincent is being covertly hostile to his little brother. He gives him a dig about what he was wearing in a recent visit to the parent's home in Neunan. Theo was by that time a bigtime art seller for Groupal, the company co-owned by their uncle, also named Vincent van Gogh, but called Cent. It doesn't help that Vincent was a total failure at selling art in his short-lived Groupal employ, attacking customers for their bad taste in art and taunting them to buy something better. Vincent's little brother, Theo, was everything that Vincent was not: smooth, polite and a good salesman.

Here is the line that intrigued me: "I cannot help seeing you in my mind's eye wearing a pince-nez with sunglasses." I'm not familiar with the French language, so I thought that a pince-nez was perhaps a style of suit, but the part that is incredible is that Theo had on sunglasses! I wondered what they looked like, and, of course, gravitated to the Benjamin Franklin style round ones: 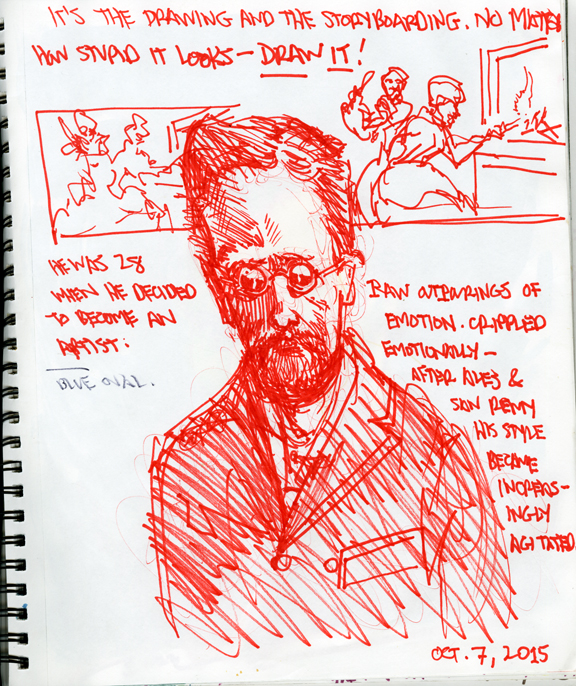 Daily Whip Out: "Theo In Ben-Franklin-Style-Sunglases"

Fast forward to the Cave Creek Wild West Days Parade least Saturday. Tom and Doree, of Historic EyeWear Company (their motto is: "Keeping History in Sight") were in town and decided to join us for the parade. As we stood waiting for the parade to begin I got to questioning Tom about sunglasses in 1885. Tom informed me the Ben Franklin round glass frames went out of style in the early 1800s and oval lenses became popular. By 1885, the "oval temple spectacles" nose bridge became passe and the Pince-nez (French for "pinched nose") style became trendy. I asked Tom what color might the lenses be and he said, "Blue was very popular." So, now we get a better idea of what Theo may have looked liked: 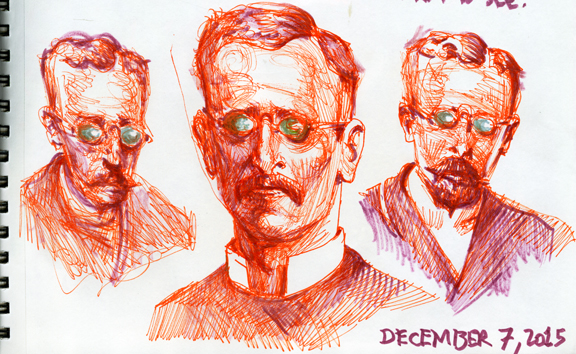 I envision Theo at the train station, arriving in Neunan, with the hipster glasses on: 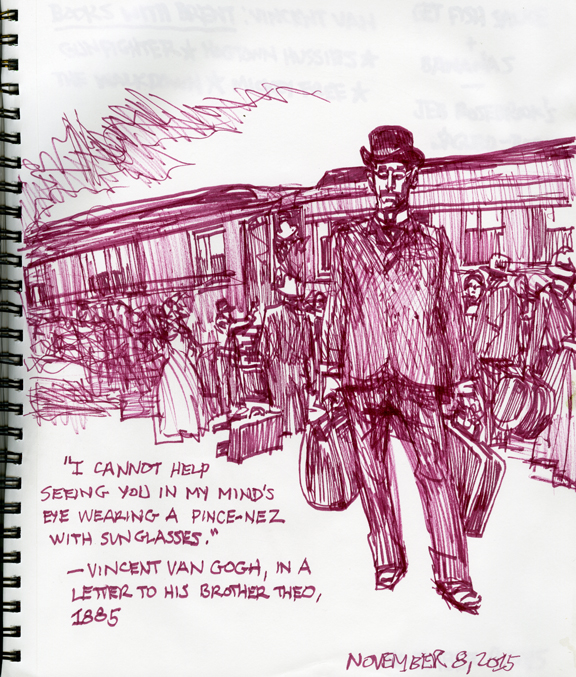 Daily Whip Out: "Theo On The Nuenan Train Platform"

Vincent hated affectation of any kind. One time a visiting artist offered to look as his artwork and when he reached out to turn a page, Vincent noticed his cuff link and launched off on how much he hated anyone who would wear such ostentatious crap!

So it pays to find the people who have spent their lives studying a particular aspect of historical ostentatious crap, and here they are: 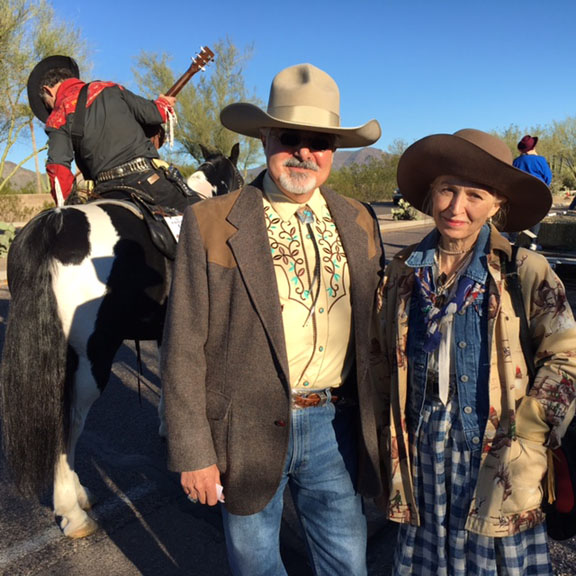 That's Gary, "The Horseback Singing Cowboy" behind them getting ready for the parade.

Okay, this just in from Gay Mathis: "From reading the actual Jan 31, 1885 letter it lists in translation for zwartglas as "black glass" and I agree with Gold Lady probably no side pieces. Lorgnette as he wrote "lorgnet" in the letter." And here's the actual excerpt from the letter:

"Since this summer I can’t help always visualizing you with your lorgnette with dark lenses.

This doesn’t change a person very much, you’ll say.

Maybe so — but my impression is that you have perhaps, in a sense other than the literal one, acquired dark glasses in what you think and do. Suspicion, for instance."

And if you want to read the entire letter here it is:

"My future's so bright I have to wear shades."
—Pop song from the nineties