January 28, 2018
Well, I cried three times Saturday morning. At a Western movie. And, full disclosure, I put off seeing this movie for a long time because I heard mixed reviews: "It's too slow," "It's too PC," and I dreaded seeing it (it felt like homework, I had to go so see it, BUT. . .), and I am so tired of slow, PC Westerns. Turns out I had bad intel. 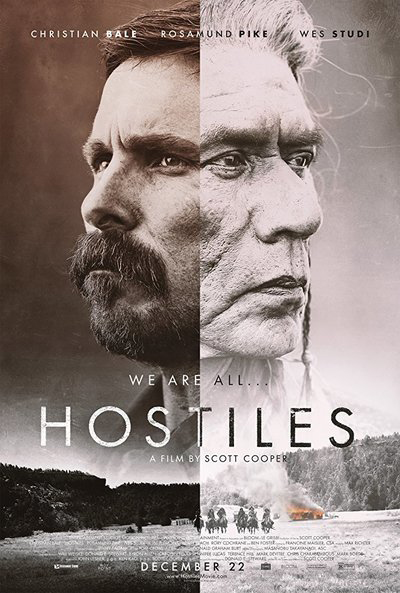 As we walked out of the theater, Kathy said to me, "Well, if you ask me, that is the most emotional Western that has ever been filmed." She's right. I got tears in my eyes at least three times—in a Western! True, it was slow in parts and not perfect, but it really takes the genre to a new level, emotionally.

And, for the record, it's not overly PC, it show Comanches being "like rattlesnakes," according to the Wes Studi character. And Christian Bale is absolutely fearless as a hard bitten, racist warrior. My only disappointment was that my favorite bad guy, Ben Foster, didn't get more screen time. He is just the best at playing unhinged characters and he got one here.

Last night I emailed our Westerns editor, Henry Parke and asked him about how "Hostiles" came into being. Here is his reply:

"The genesis of Hostiles was an unpublished manuscript by Oscar-winning screenwriter (for 1982's MISSING) Donald E. Stewart. Stewart died back in 1999, and if I remember correctly, his widow showed the manuscript to Scott Cooper."

Here is Henry's review of the film.

A decade ago, Christian Bale played the reluctant temporary deputy escorting outlaw Ben Wade (Russell Crow) to a train in the remake of Elmore Leonard’s 3:10 TO YUMA. In HOSTILES, he’s more than reluctant; he’s defiant. A heroic, much-honored veteran of both the Civil War and Indian Wars, Cap. Joseph J. Blocker (Bale), is ordered to escort captive Cheyenne Chief Yellow Hawk (Wes Studi) back to his homeland in Montana, presumably to die. Having lost many friends at the hands of Yellow Hawk and his men, Blocker refuses, and it is only the threat of court martial, and loss of his pension, by Col. Briggs (Stephen Lang), that induces Blocker to transport Yellow Hawk and his family through deadly territory. 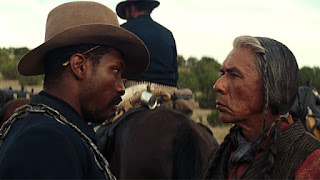 The movie becomes, in a sense, a ‘road picture’, with Blocker and Yellow Hawk gradually coming to grips with their intersecting pasts and their terrible memories. There are chance encounters along the way. En route they meet up with Rosalie Quaid (Rosamund Pike, Oscar-nominated for GONE GIRL), a settler whose husband and three daughters have been piteously butchered by Comanches. Her mind shattered by her pain, she is brought along, and begins healing along the way. Soldiers and Cheyenne must do battle with Comanches, enemies of both. They’re also asked to transport a soldier to a court for trial and presumably a hanging – Sgt. Charles Wills (Ben Foster) hacked a family to pieces with an axe. Wills has a history with Blocker – they soldiered together – and Wills is eager to convince Blocker that his crimes are no worse than Blocker committed, and that they’re a pair of angels next to Yellow Hawk. Interestingly, Foster, who all but walked away with last year’s HELL OR HIGH WATER, as the bank-robbing brother with no off-switch, has a history with Bale, as he played Crow’s obsessively-loyal right-hand in 3:10 TO YUMA. Come to think of it, he all but walked off with that movie as well. 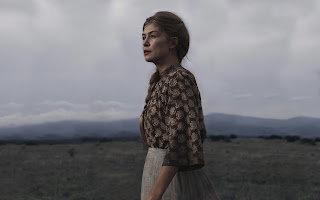 HOSTILES, written and directed by Scott Cooper, based on a manuscript by the late Donald E. Stewart, an Oscar-winner for 1983’s MISSING, is a deeply felt story, peopled by soldiers, Indians and civilians who express their feelings with utmost caution.  Despite the familiar premise, the flow of the story, and the people who populate it, are happily unfamiliar. The cavalry soldiers assisting Blocker include a young Frenchman (Timothee Chalamet – currently starring in CALL ME BY YOUR NAME), a sergeant recently treated for melancholy (Rory Cochrane), and a loyal black corporal (Jonathan Majors) ironically in charge of chaining the Indians. It’s full of both quiet passages, and jarring, unflinching violence – in some ways it’s the SAVING PRIVATE RYAN of Westerns. 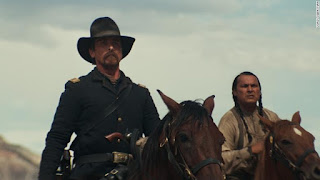 Scott Cooper made CRAZY HEART with Jeff Bridges, but his Western credentials go back further, to his acting career, in GODS AND GENERALS, with Stephen Lang, and the excellent miniseries BROKEN TRAIL. Cinematographer Masanobu Takayanagi, who also shot Cooper’s BLACK MASS, makes full, beautiful use of the New Mexico and Arizona locations, and at times effectively thrusts the viewer deeper into the action than we want to go. There is also frequently a classical look to the images – his doorway compositions are not merely an homage to John Ford, but a jumping-off point.
My one disappointment is that the excellent Adam Beach, who plays Yellow Hawk’s son, has virtually nothing to do. But with a performance by Bale that runs from barely contained fury to understated grace, and a story that is frequently grim, but never without hope, HOSTILES is one of the finest Westerns in several years. From Entertainment Studios Motion Pictures, it opens in theatres on January 19th.

"There are no good guys or bad guys in the West, everyone was a victim, everyone was guilty. It's a movie about transformation and the power of forgiveness!"