January 16, 2018
Our February issue on Chatto, "Apache Traitor Or Hero?" has sparked an interesting controversy. So far, we have received a half dozen letters pointing out the stunning similarities between these two photographs. 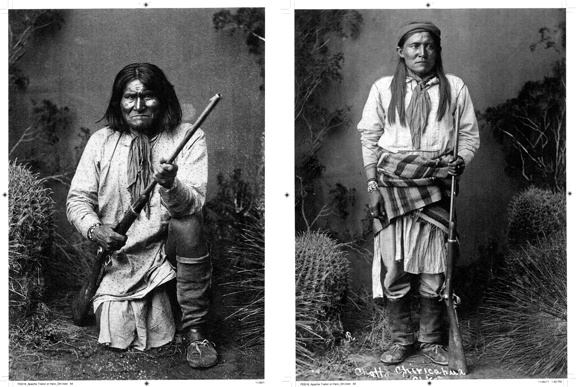 Geronimo and Chatto sporting the exact same necktie and rifle. Notice the same cactus. Some even see the same bracelet.

Here is the latest letter:
"It is interesting that both photographs of Chatto 1884 and Geronimo 1887 not only show show use of the same props (foliage) by photographer but use —without a doubt the same gun! Gun shown, in my opinion is a sporterized .45-.70 trapdoor Springfield rifle. Interestingly it may at one time have belonged to a Western post army officer. Custer had an earlier .50 cal. Allen conversion Springfield for his personal use. Also sporterized.

"Western photographers often used same props over and over. Many, but not all, Western photographs often show dudes all decked out in new store bought gun rigs with empty cartridge belts, new chaps, boots, clothing often in real tough poses.

"The Springfield here for sure did not belong to Chatto or Geronimo but they for sure would have wished it did at the time."

This Just In:
So I called Mr. Yena (he doesn't do email) and on further inspection he claims that Geronimo is wearing a spur strap, "upside down!" and that above the strap you can see a shackle. 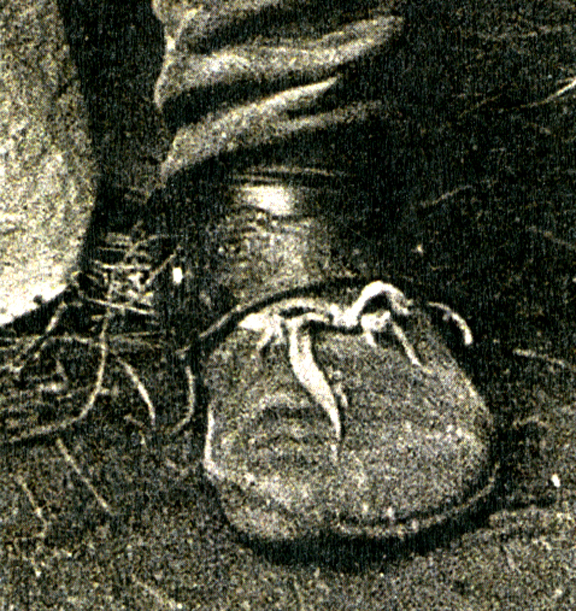 The Top Secret Writer Responds
"The photos were both taken by A Frank Randall at San Carlos in 1884 (your caption is wrong in the Feb TW). There is also a similar photo of Mangas, but with a different gun, obviously taken at the same time. I doubt if the scarf is a prop as Geronimo wears scarves in other photos, but it certainly could be. I agree that it is a prop rifle, perhaps owned by Randall. Geronimo is of course photographed with his own Springfield in the famous surrender photos. Very observant reader."
—Paul Andrew Hutton

Our Gun Expert Weighs In
"While there is no way to know for sure who owns the rifle, my guess is that it was probably a studio gun. This was a common practice and can be seen in photos from other frontier photographers to spice up their images. A good example is L.A. Huffman of Montana, whose Sharps rifle appears in a  number of photos, including being held by Indians in his studio, then again propped next to an Indian burial scaffold, and so on. 'Sporterized,' means the stock has been modified for sport, usually by cutting down the length. However, cutting the stock down is only part of what could be a custom sporterizing of a firearm. One could also change the sights, refinish the arm,  add a padded butt to the end of the stock for comfort, and a myriad of other personal options or alterations to make the gun more into a custom sporting arm, rather than a straight military firearm."
—Phil Spangenberger

"A louse in the cabbage is better than no meat at all."
—Old Vaquero Saying