The Rescue of Olive Oatman

January 10, 2018
I woke up this morning and wanted to add one more sidebar to the Olive Oatman package that would help explain some of the conflict about her release. Here is the angle I wanted to pursue. 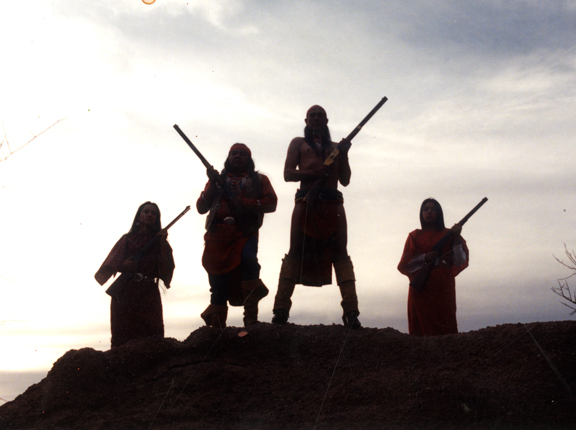 In February of 1856 a Quechan warrior accompanied by three of his siblings showed up in the Mohave Valley announcing to everyone he had the authority from the commander at Fort Yuma to take "Spantsa" back with him. Spantsa was the Mohave name for Olive Oatman and the liberator's name was Francisco. A council was called. Over a three day period, while Olive was taken to another part of the village, Francisco argued for her release. The Mohave Chief Espaniola objected to her release and finally denied the request to set her free. Francisco and his brothers left, crossing to the other side of the Colorado, where they pressed the case to the Mohaves living on that side of the river. After much pleading, he convinced them that if the Mohaves who held onto Olive kept her, all the Mohaves up and down the river would suffer. Francisco crossed again with his new lobby group and a second council was held, this time with Olive present. Francisco presented the Spantsa pass (see below) and, with some difficulty (she hadn't read, or seen, English in five years), Olive read it and translated it into Mohave. Francisco pressed his case claiming if he didn't return with Olive the soldiers would kill him and all the Quechans. Finally an elder said, "I am satisfied. . .we raised her so that if anyone wants her back, they can have her." It didn't hurt that this time Francisco threw in a white horse for the trade. Olive had mixed feelings about all of this. She was part of a family and perhaps even had a family of her own. One final tidbit seems to underscore that: when she was getting ready to depart the valley, Chief Espaniola's son insisted on stripping Olive of her Mojave possessions, beads and a blanket. Was he, in fact, a husband who wanted his marriage presents back?
Several years later Olive landed in the Rogue River country of Oregon. One of the women of Phoenix, Oregon remembered that Olive was "subject to the deepest fits of melancholy and despondency, often walking the floor at night weeping and wringing her hands." As the author, Brian McGinty so aptly puts it, "Olive had left the Mohave Valley. . . but the valley had not left her." 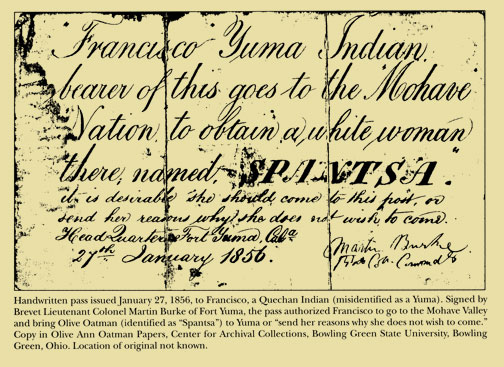 The handwritten pass issued January 27, 1856 and signed by Brevet Lieutenant Colonel Martin Burke of Fort Yuma. The pass authorized Francisco to go to the Mohave Valley and bring back Spantsa (Mohave for "sore vagina").

"A sore vagina by any other name would be an improvement."
—Old Vaquero Saying

Update: Ran out of room and had to punt. This episode will be in the book but not the March issue of True West.