January 31, 2018
If you saw yesterday's post, you no doubt noticed I asked everyone on staff and our contributing editors to send me a photo when they were young and to give me a couple lines on how they became interested in Old West history. Here is what the artist Thom Ross sent me: 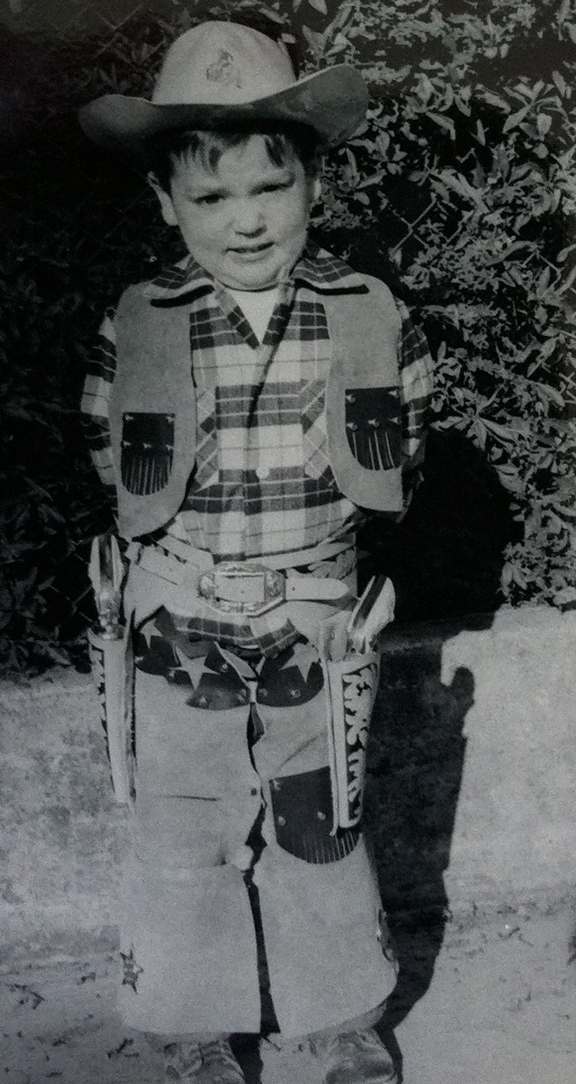 Thom Ross: "This photo was taken of me at the local tennis court just below my home in Sausalito proves the power of television.  Although San Francisco was a "western" town in it's hey-day you very seldom think of it when the discussion of famous towns of the Old West come up.

"And by the time I was born (Sept. 1952) it was moving into it's very hip music scene which would explode there in the 60's.

"My first hero was Siegfried!  My parents had a book on heroes and Siegfried appeared in those pages with a fabulous etching of him slaying the dragon, Fafnir.  I would listen to Wagner's "Der Ring des Nibelungen" each morning while eating breakfast before going off to nursery school.  (The two movements I listened to were "Forest Murmurs" and "Siegfried's Rhine Journey").

"I remember my parents waking me up late at night during one of their cocktail parties and they took me downstairs still sleepy-eyed in my pajamas.  In front of all those grown-ups they asked me to strike my "Siegfried" pose....which I dutifully, and honorably, did.  My left-hand clenched behind me while my right arm thrust straight out as I saw Siegfried do, driving his sword into Fafnir.

"So I was already into my hero-worship phase!

"But it was the TV westerns that really grabbed me.  Like I said, I did not grow up anywhere near a place one could call "western" in feel.  My cousins, on the other hand, were raised on a cattle ranch outside Fallon, Nevada, and my uncle was the real deal.  After he sold off the ranch he spent several years as the  stud-duck of the famous Wine Cup ranch outside of Jackpot, Nevada.  My cousins, Jackie and Sammy, each had horses AND a gun!  I was sick with jealousy!

"But it was the influence of "Rawhide" (with that truly great theme song), "Bonanza", "Bat Masterson" and "Wyatt Earp" etc. that shaped me the most.  And it was at that time the I saw Disney's "Davy Crockett" series and THERE was my hero.

"In my 2nd grade class photo I am wearing a fake fringed Disney shirt with Fess Parker's iconic image stamped on a label.  And a lot of the boys were into the westerns etc. but as far as I know I am the only one who made a life out of that passion for heroes and the Old West.

"Gosh, I remember going with my dad to see "The Magnificent Seven"....and then John Wayne's "The Alamo" came out and when it was playing in Sausalito I'd just walk to the theater and stare at the great painting by Reynolds Brown.  And then one Saturday I stumbled onto "The Last Command" starring Sterling Hayden as Jim Bowie.....and Hayden was living IN Sausalito!  (When Hayden took his kids and fled to Tahiti on his ship, the "WANDERER", it was skippered by Spike Africa....and I knew his kids, Deedee, Kit, and Dana (who was in my class).

"And then there was the weekend day when my father read me Stuart Lake's account of the OK corral gunfight and I can still remember listening to every word and having them turn into pictures in my head!  I was just amazed that not one teacher had ever mentioned this all-important event to me!!!!!

"And the weekend we went up to the Lambert's cabin in the Coast Range and on a wall in this rustic cabin was a print of "Custer's Last Fight".....and I was totally unaware of who he was.....I couldn't even pick him out in the print....I pointed to only men in uniform and completely missed our darling boy in flowing hair (like Siegfried for God's sake!) and golden buckskins.

"There was a dance school in San Francisco run by a guy named Dick Ford.  My class was invited to attend his class to be filmed and put on television.  My dad often told the story of how the camera followed Dick Ford around and each kid he came up to he would ask: "and what are you going to do today for your dance?"  And not a kid said anything....the parents at home, watching this on TV, must have been howling with tense laughter.

"It was ALL a fantasy for me.  I mean, I rode horses when I was very little (Topsie was my horse's name....the name of the stable in Fairfax was Sleepy Hollow.....and when I heard about the Headless Horseman riding around in the story, "The Legend of Sleepy Hollow", well, I was always nervous riding there!  I thought that this WAS the same Sleepy Hollow!  That headless horseman stuff fucking freaked me out!

"(We went riding there one time and we were listening to a Giants - Mets game on the radio.  We turned it off when we went riding...but when we got back in the car to drive home, low and behold, the game was still on!  It went 23 innings and the Giants won it when their pinch-hitter, Del Crandall, hit a double off the centerfield fence which scored what proved to be the winning run (May 31, 1964 - Shea Stadium - 23 innings - SF 8 - NY 6.  It was also in this game that Gaylord Perry first threw a spitball......he had to do something because the Giants were going to get rid of him!  He was the winning "pitcher of record" too!)

"So I do not know if I had a vivid imagination myself or if it was born within me by all this input from without.  And as you know, it is still with me today although it has branched out into fields of interest other than just westerns.  But whatever that place is that is inside me, inside my head, inside my heart, I would not trade it for anything else on this planet.  It has become my own religion as well as my own path..........it has been a miracle."

"I would have sent you a shorter letter but I didn't have the time."
—Mark Twain