January 9, 2018
I had some major help on the Olive Oatman feature story. At the top of the list is author Brian McGinty, whose groundbreaking book "The Oatman Massacre" (2005) is the go to source for solid scholarship on Olive Oatman and her tragic, but amazing life. 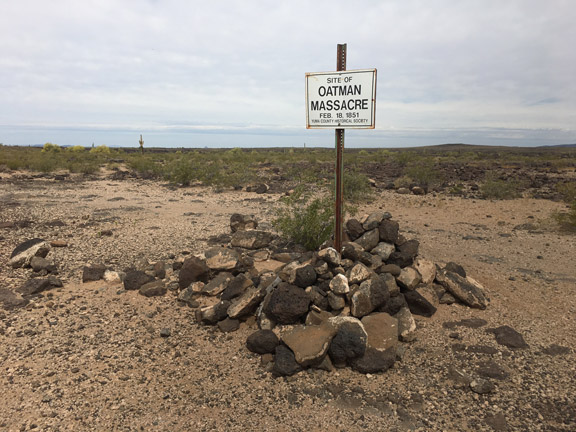 Jeff Cuneo is a retired engineer and an avid history buff who first became​ fascinated with the Olive Oatman story forty years ago. Since his retirement from Motorola he has moved to Las Vegas, Nevada to be closer to the southwest and locations in the Oatman captivity story, including the area around the Colorado River where Olive spent four years with the Mojaves. He notes, sadly, "As near as I can tell, Maryanne's burial site is next to a golf course." He has spent weeks and months researching, hiking and studying the probable route of the Yavapais who spirited Olive and her sister into a life of slavery. Utilizing Olive's own words and narration of the tragic trek, Cuneo believes he has matched almost all of the descriptions with actual geography. The exclusive map we will be running in the March issue is based on his research. Here is a photograph of the pass in the mountain (today known as Oatman Mountain) where the raiders first took the girls and the oxen. 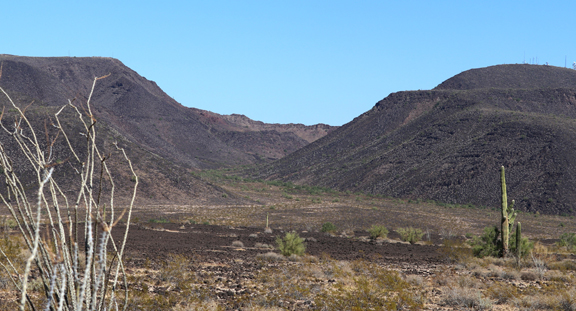 This is the draw the Yavapai raiders
went through on their escape.

My good friend Vince Murray has also spent many decades studying the Oatman story. In fact it was Vince who finally took me out to the massacre site last year. He is also quite conversant on Arizona mining history and provides several insights into the naming of Oatman and shines a light on one of the crazier spin-off stories that came out of the Oatman mining district. 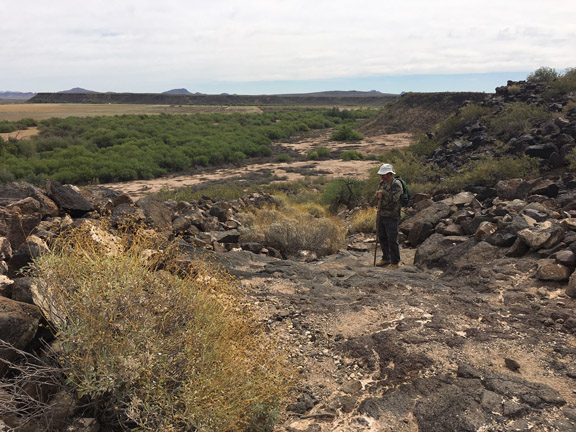 Vince standing on the rough and rocky road
the Oatman's pushed their wagon up
just prior to the attack.

And, of course, where would I be if I didn't have the ear of, and the solid scholarship of, the Top Secret Writer:

"The unspoken underpinning for the entire Olive Oatman story is the question of her sexual relationship with her captors. This was something the Victorian mind fed on.The Puritans before them had made this a central part of the captivity narratives that formed an important part of colonial American literature. "The fate worse than death" may seem a quaint concept today but it was very real in the nineteenth century. So real, in fact, that General Custer had standing orders that his wife Elizabeth was to be shot rather than allowed to fall into the hands of the Indians. Novels and films used this as a theme in the nineteenth and twentieth centuries (The Searchers, Trooper Hook, Two Rode Together, Stalking Moon). Ethan Edwards (John Wayne) is on a quest to kill his niece Debbie, not rescue her in The Searchers. This may seem insane today, but it was very real in racist Victorian America. Not only did Olive Oatman not die in captivity, she had grown into a young woman of striking beauty during her time with the Indians. The tattoo on her lovely face only fueled the Victorian mind--what else had the "savages" done to her? That tawdry undercurrent of suspicion fueled the success of Stratton's book and the lectures that kept Olive's story before the public. That question, of course, despite the sea change in public morals, still fascinates us."
—Paul Andrew Hutton

"Living is a form of not being sure, not knowing what next or how. The moment you know how, you begin to die a little. The artist never entirely knows. We guess. We may be wrong, but we take leap after leap in the dark."
—Agnes de Mille