Three For One: Caught With His Pants Down

July 14, 2018
It was on this date in 1881 that Billy the Kid caught a bullet in Pete Maxwell's house in old Fort Sumner, New Mexico. I have illustrated the events leading up to this weird killing numerous times.

In the Garrett-Poe version of the killing, Pat leaves his two deputies outside the Maxwell home and goes in Pete's bedroom to ask about the whereabouts of Billy (full disclosure: Maxwell wrote Garrett a letter basically saying the Kid was porking his sister and to please come take care of him). While the deputies are waiting at the gate, they see a lone figure come walking across the parade ground in his stocking feet and buttoning up his pants.

I have always thought this was a crock. Two words: bull heads. Or, is that one word: bullheads? You know, stickers that hurt if you are walking without shoes, at night, and buttoning up your pants. 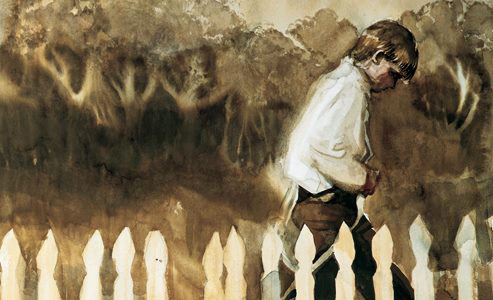 I don't believe any of this. It doesn't make sense. The men, and I mean all of them: Garrett, McKinney, Poe and Maxwell, but especially Maxwell, wanted to avoid the dishonor to young Paulita's virtue, and, so, in a Victorian laced concocted story, they got him out of the house, walking barefoot. This was a tortured way to explain why the Kid was in his stocking feet when he was shot down.

I believe the Kid was in the Maxwell house in Paulita's bedroom just before the shooting. There is contention about where exactly that bedroom was in relation to her brother Pete's bedroom. Some say, across the hall, others claim her bedroom was upstairs. There are those that argue there wasn't a second floor at the time of the killing (Poe says in his write-up that it was a single story adobe). In McKinney's version, they simple went to the Maxwell house, tied up the girl and waited for the Kid to appear in the doorway and shot him down (Garrett supposedly hid behind a sofa. There's an image).

As I was writing this, I looked up above my desk to see the original of this unfinished sequence: 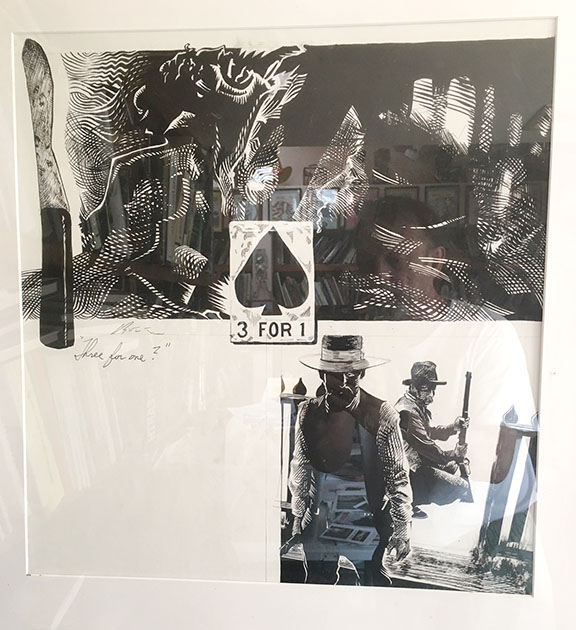 I found this old playing card in an antique store with that writing on it—3 for 1—and thought it needed to be in the center of this allegorical sequence of the events leading up to the assassination, I mean, needed-killing, of Billy the Kid. Yes, that's Jesus in the painting and yes, that is my rendering of the knife the Kid was allegedly carrying when he was dispatched. And, yes, that is McKinney and Poe at the front gate.

"To cheat wolves is to promise vultures"
—Old Vaquero Saying