October 10, 2018
Gave a history talk last night in Lake Havasu on Olive Oatman and all the ne'er-do-wells from Mohave County (my home stomping grounds).

The talk was filmed by CSPAN and will appear on the channel in early November. Here I am this morning on the waterfront with the notorious London Bridge in the background. 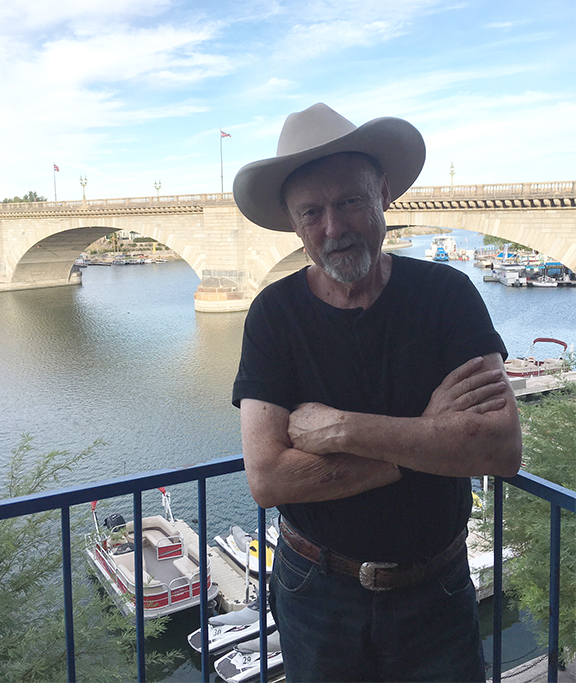 On the waterfront with BBB

When I was in junior high, in 1961, my parents took me and my grandparents on a Sunday picnic down to Site Six, on the arid banks of Lake Havasu and I remember there was just one lonely boat dock building on the edge of the water. A local historian told me last night that in WWII the army scratched out a dirt airfield and put a couple barracks out there to support it. This was to protect the rest of the country in case California was invaded and taken over by Japan. Ironically that is also the origin of Rocky Point, Mexico which was also established by the Army Corp of Engineers as an alternate sea rout to the States if Japan blocked off the Pacific Coast.

I also remember Charlie Waters (his father owned the Mohave Miner and they got the scoop) coming to my parent's house on Gates Avenue in Kingman and telling me the developer, Robert McCulloch, of McCulloch Chain Saw fame, had just bought London Bridge and was going to ship it, brick by brick, to Site Six and that he was going to call the proposed town Lake Havasu. It just seemed so insane at the time, but it was a brilliant stroke of promotional genius.

That was fifty years ago.

Today there are some 55,000 people living in Site Six, I mean, Lake Havasu.

Well, when you're down on your luckAnd you ain't got a buckIn London you're a gonerEven London Bridge has fallen downAnd moved to ArizonaNow I know whyAnd I'll substantiate the rumor that the English sense of humorIs drier than than the Texas sandYou can put up your dukes, and you can bet your bootsThat I'm leavin' just as fast as I can. . .
—Jerry Jeff Walker, "London Homesick Blues"