March 17, 2019
Last week I revisited my early adventures in the publishing game, highlighting my numerous run-ins with printing presses and the grizzled men (they were all men) who ran them.

In the list, I mentioned that my Kingman compadre Dan Harshberger, printed the Razz Revue (it's not a comic, it's not a magazine, it's a "magazomic!") on an AB Dick 360 press at RAU Advertising, located at 24-something Street and Indian School Road in Phoenix. Rau Advertising was run by Al Rau and Dan was his graphics guy.

Dan and I were roommates at Park Lee Apartments and we got it in our Kingman-crazy heads we were going to produce a local humor magazine, like The National Lampoon. As someone later quipped—I think it was Daniel Ben Horen—we thought we were being so original, but our friend reminded us that Arizona already had a daily humor publication called The Arizona Republic.

Anyway we talked Al Rau into letting us use his equipment after hours. Al was a great guy and he not only let us, he encouraged us.

So I would show up at 5:15 p.m. just as everyone else was going home, and Dan and I would take over the premises—it was an old house converted to office space and the printing press was in the former carport.

We and our girlfriends—Darlene and Terry—set type on a Selectric typewriter, shot PMTs of the artwork and type, then stripped it all up on a lightbox utilizing Rubylith (SIC), burned the plates and then Dan inked up the Dick, which was quite small really, like an oversized mimeograph machine.

More than once, we worked all night, then Dan went to work in the morning, having not left the building for 24 hours!

So I called up Dan last Friday and asked if he still had a series of photos I remember taking of him standing at that press. He seriously doubted it.

Well, against all odds, Dan's wife, Darlene (Yes, the same former girlfriend all these years later!) found a box of negatives in the garage and Dan scanned one of them and sent this to me. 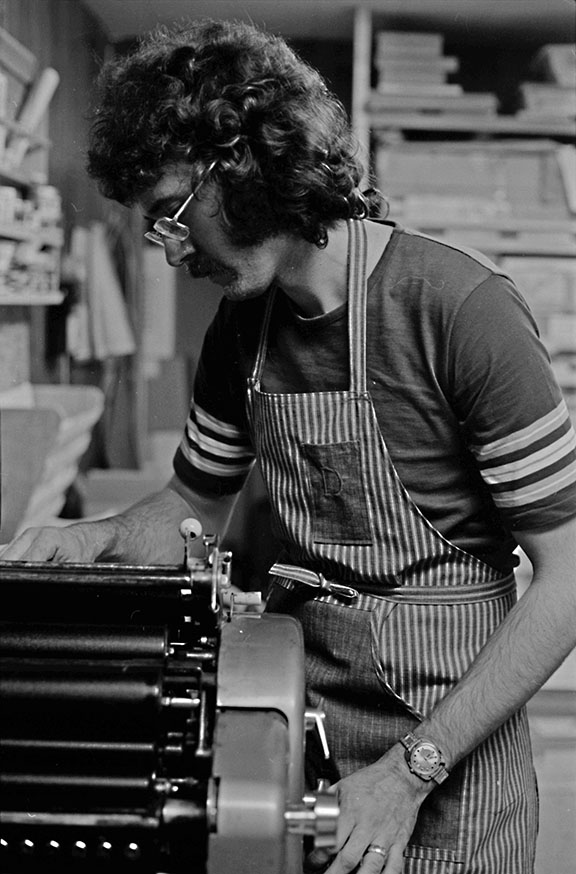 And, here is another view of Dan and the press which Dan found this morning by going through hundreds of negatives: 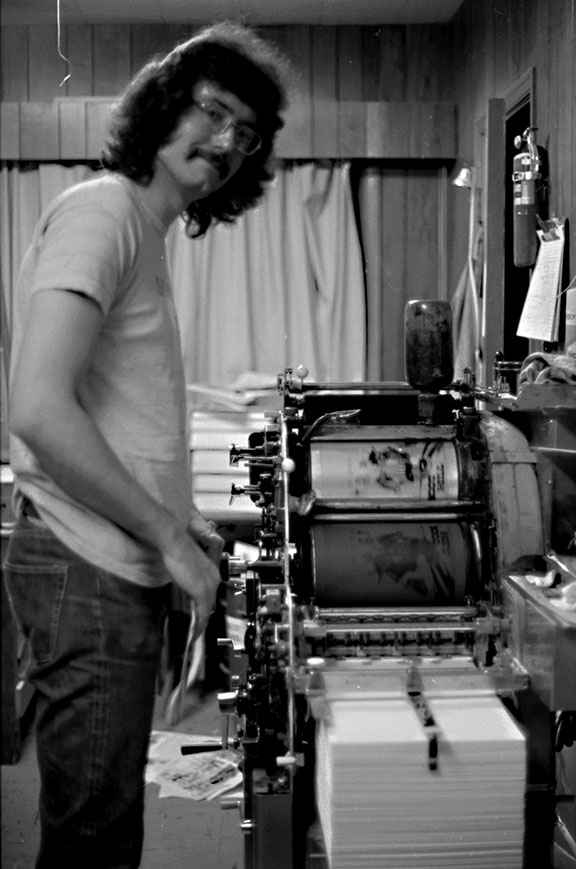 
I sold the ads and Dan ran the press. The Razz lasted four years, and 16 issues, and we made zero profit, but we learned everything there is to know about printing and publishing from the experience. For me, in terms of an education, I had earned my Master's Degree.

"A free press belongs to the man who owns one."
—Old Vaquero Saying