March 10, 2019
I've spent my share of time in a press room inside a printing plant, both descriptors of a dirty, industrial type building where ink meets paper.

In the 1950s my best friend's father—Dick Waters—was the publisher of The Mojave County Miner, and I remember going into the back of the building and seeing and hearing those big, ol' clumsy presses grinding away at the printed page in downtown Kingman.

In the 1960s at the University of Arizona I did a cartoon strip for the Daily Wildcat called "Dick Matric" and I got to see the nighttime shenanigans of the hot lead setters down on South Fourth Avenue.

And, in the 1970s, Dan The Man Harshberger and I published The Razz Revue and, believe it or not, we printed the whole shebang on an AB Dick 360, which is a legendary press that looks basically like an overgrown mimeograph machine.

In 1978 I became the art director at New Times Weekly and it was my job every Monday to deliver the paste-up boards of type and waxed down photos to the printer at 20th Street and Jefferson in downtown Phoenix. I'll never forget one summer afternoon driving in my Ford F-150 pickup down Washington St. with the boards in an open, flat box next to me on the seat. It was at least 118 degrees out and my truck did not have AC, so I had the windows down and the heat began to curl the edges of the type and soon enough little pieces of type (mostly corrections cut out and run through a waxer, on top of the set type) began to fly around the cab of the truck. When I finally got to the printing plant,  I had to reassemble the paper from all the tiny loose ends I could find so the pressmen could shoot it and turn it into plates.

All of this brings me around to the managing editor of Out West magazine. I don't know who Charles Fletcher Lummis's actual managing editor was—or, whether he even had one—but in my graphic novel he is going to be a guy named Sid, who everybody calls "El Cid," because he is the guts of the magazine. I've known many of these guys and here I am trying to channel all of them into one image. 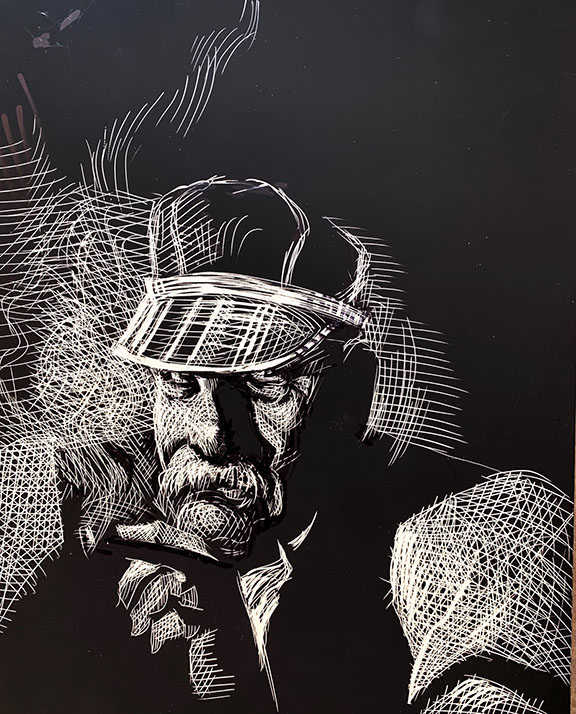 Grizzled, to say the least, ornery by necessity and inked-stained up the wazoo. That would be my take on the profession and the guy.

"Never get into a fight with someone who buys ink by the barrel."
—Old Newspaper Saying
Posted by Bob Boze Bell at 2:46 PM