November 29, 2019
I am rounding up 30 paintings from "The Illustrated Life & Times of Geronimo" to be included in an art show at the Scottsdale Museum of the West on January 16.

I had Kathy help me choose the best paintings (there are 67 original BBB illustrations in the book) and as she did so, she pulled out a handful of them and said, "If these are going to be in a museum show, these five need more work."

Ha. This is funny because they are in the book as is, and if I "improve" them, what will that say about the images in the book? Never mind. It was good advice.

Some of the fixes were small; pencil lines visible, sloppy eyes, and I fixed those in ten minutes. A couple of the others are more problematic and challenging, and I spent all day yesterday—and a half-day-today—trying to salvage one of them.

My original take on Sibi's Crew was a parody of Frederic Remington and how he would approach the concept (in fact, it's signed "Freddy Remington, 1888" in the lower right-hand corner). As I was cleaning it up for the show I found myself falling back under the spell of these four legendary characters and how obvious, it seems to me, that a movie is in there waiting to be filmed. 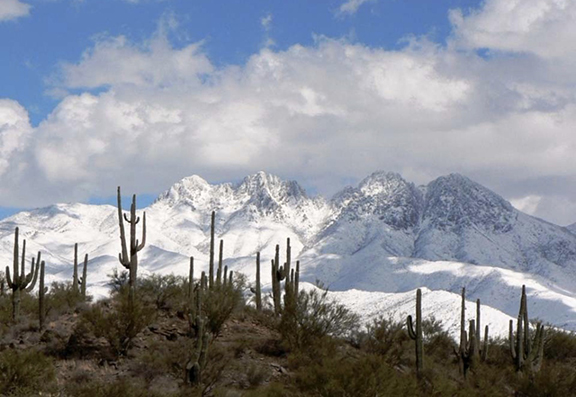 Four Peaks Four Legends
There was a time in the mid-1880s when the Apache Kid, Al Sieber, Tom Horn and Mickey Free rode the rez together enforcing their own harsh brand of justice. This is actually true and it's why the painting is in the book. In terms of a movie idea, from there, the Apache Kid seeks vengeance (true), Sieber is wounded in the resulting showdown (also true) and Mickey and Tom Horn join forces with N-Jim and go after the Kid who escapes to Mexico. (true, true and true enough)

So, here's the reworked painting. You can compare it to the one in the book and I have a hunch you will exclaim to yourself, like I did, "Damn dude, listen to your wife more!" 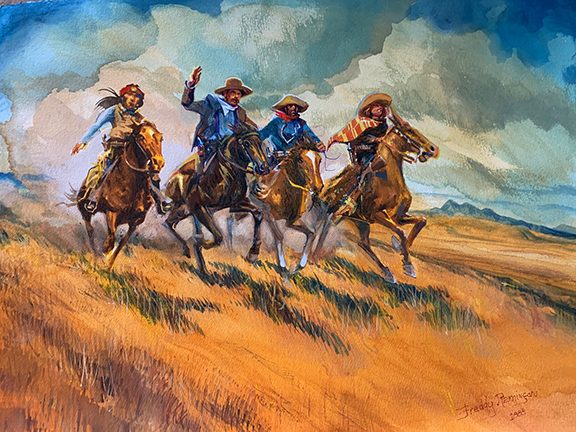 
And, yes, that is Four Peaks in the background.

Good Advice
"The next time you're afraid to share ideas, just remember someone once said in a pitch meeting, 'Let's make a movie with a tornado full of sharks.'"