Too Many Lists But Not Too Many Movies

November 7, 2019
So, I was at a Christmas party about ten years ago and I was introduced to a guy who said, "Oh, I know who you are. I used to subscribe to your magazine."

Now, these are the four worst words a magazine publisher can ever hear—"I used to subscribe"—so I asked the obvious question and Lonnie Couch replied, "Too many lists." 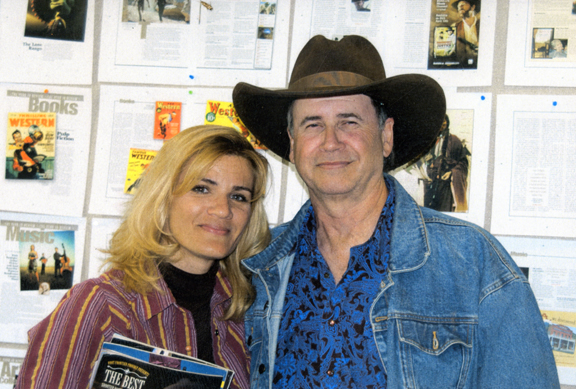 At that time we were being coached by a bigtime New York magazine expert on how to sell magazines and his advice was simple: "People love lists!" So we had, THE 27 BEST HISTORIC SITES IN NEW MEXICO and THE 100 BEST LONG GUNS and THE BEST LIST OF LISTS!

I'm joking, but you get the idea.

Long story short, I invited Lonnie and his wife into the True West World Headquarters and had the two of them answer questions and when one of my sales people asked, "Is the Santa Fe trail interesting?" Lonnie replied, "It's not the trail. It's what happened on the trail." I took a photo of the two of them, above, and had it framed with that quote on it, and it hangs to this day in our conference room and we refer to it often.

I haven't talked to Lonnie in a long time, but I called him up today. We have an in-house controversy going about so-called movie covers. Whenever we run a popular culture character on the cover, the newsstand sales increase by about 35%. This is significant to a small publisher. Here are the best sellers for the past ten years.

Best Sellers Ever! Notice a Theme?

One of the people here at True West (his name rhymes with Ken Amorosano) thinks we may have gone to the well too many times and people who love history are fed up and not buying True West because we are forsaking history and running too many movie covers. So, I called Lonnie and this is what he said:

"I am still a faithful subscriber and I would not like to see too many movie covers because I am here for the history. But, so far, I don't think you have run too many. In fact, when you bring films back to the real history I actually enjoy it."
—Lonnie Couch
Posted by Bob Boze Bell at 2:25 PM