Out Where The BS Begins

November 10, 2019
I got taken to school yesterday and I learned a valuable lesson.

After the art opening at Ed Mell's gallery, Kathy and I motored out to Scottsdale so I could pick up a book I ordered from Poison Pen ("News of The World"). Since we were in the West's Most Midwestern Town, we thought we'd take in a movie. My choices were "Jo Jo Rabbit," "Parasite" or "Motherless Brooklyn," but none of them were playing at the right time so we went to Pita Jungle for lunch and it was slammed on a Saturday afternoon, so we sat at the bar and struck up a conversation with a woman sitting alone and studying a film festival schedule. Turns out, right next door to Pita is Harkins 14 Theaters where the annual Scottsdale Film Festival was unspooling and we decided to walk over there after lunch and see whatever was showing at the time.

"Widow of Silence" is a film I would never have chosen in a hundred years of silence. First off it is from India so my interest level was several notches below zero and on reading the synopsis it sounded to me like a giant load of pretentious crap. Not only that, but we had missed the first five minutes, and as we found a seat in the dark I steeled myself to be tortured for about 85 minutes.

Imagine, if you can, my surprise, and horror, when I immediately noticed the spectacular scenes of crooked, sun-baked adobes and mountain villages. Shot beautifully with a rhythm I have never seen before (often scenes don't end when the actor leaves the field of vision which creates a shadow effect, or, a lingering expectation that doesn't come.) Yes, the story was torturous—terrorist injustice and misogynist, bureaucratic nightmares—but the whole thing was so brazenly original and it had so much integrity and austerity, I couldn't believe my good fortune to catch this amazing movie and learn a thing or two about new ways to see narrative storytelling.

So, what is the lesson here?

Pay attention: the universe is trying to help you.

Anyway, all of that inspired me to come home and do this: 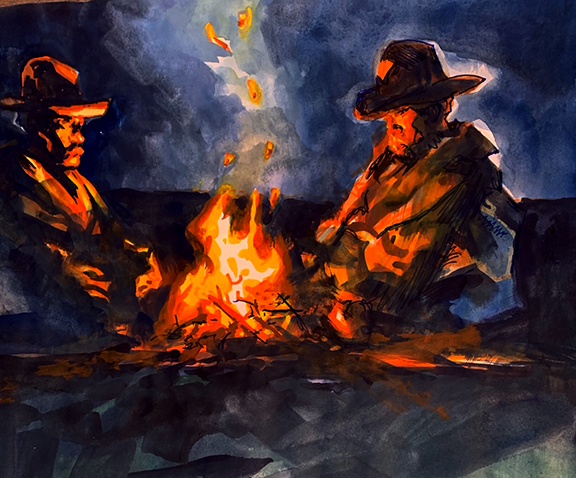 Daily Whip Out:
"Out Where The Bullshit Begins"

So much of what we perceive to be true history or good storytelling is actually the same old BS but told from a new angle. And that is a good thing.

"Ring the bells that can still ring, forget your perfect offering, there is a crack in everything, that's how the light gets in."
—Leonard Cohen