June 1, 2020
As the Ocotillo Fire swept up onto our plateau two days ago, we evacuated in such a hurry, I left my wallet with all my ID and credit cards, not to mention all my meds, and my computer and all my sketchbooks and paintings (so much for the measured evacuation of the last fire ten days ago, where we packed the eight things we needed). 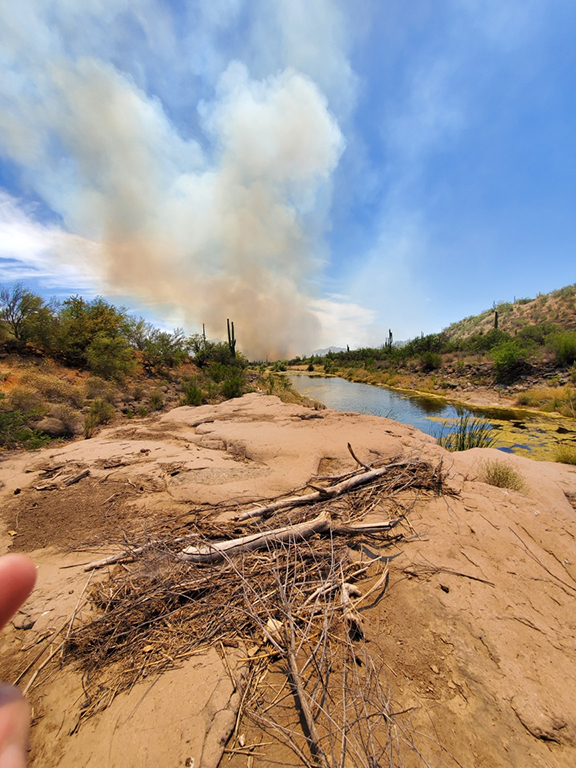 The Ocotillo Fire Started at Rancho Manana
And Rapidly Moved Up The Creek Towards Us.
Photo by Tom Augherton

One thing is clear: after having lived in the same house for 33 plus years, one gets a little attached to the idea of it always being there. 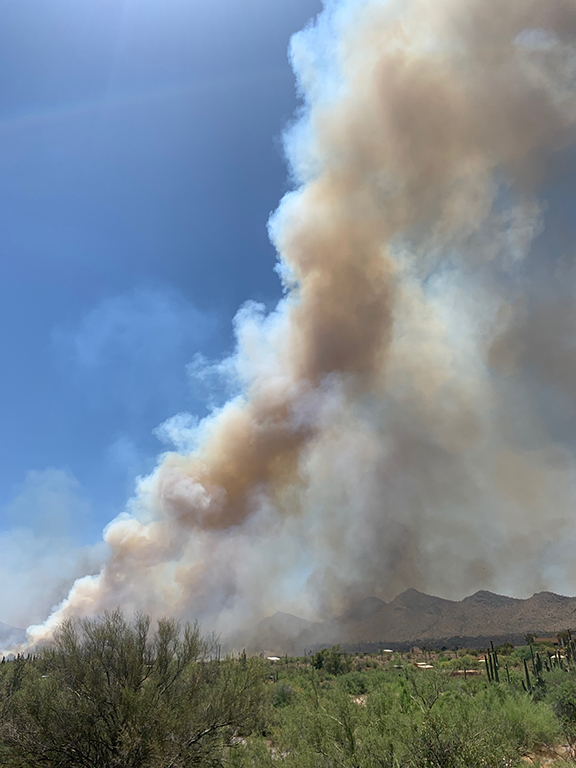 Smoke rises from the area around our property.

We escaped a maelstrom of fire with the loss of Kathy's car but did we lose our house as well? That was the question that haunted me all day Saturday.

After having her burns treated at Banner Hospital, Kathy and I discussed the odds of our house surviving the firestorm. Kathy is a family therapist, and she is used to dealing with delusional patients like me. She told me about working in disaster areas for the Red Cross and how people often cling to irrational hope about reclaiming their burned homes only to discover that even those homes that did survive a fire, can be smoke damaged and the stink and the damage of it can render everything inside as unusable. Somehow, that almost made it worse, but I had to face facts. I absolutely had to come to grips with the truth.

There was only one problem: the sheriff's department would not let anyone back into the fire damaged area. I kept imagining our house with all of our belongings sitting there, untouched. Yes, I was completely delusional!

At 6:30, on Saturday night, the ex-mayor of Cave Creek, Tom Augherton, told me he was going to make a run at the barricades, which were set up at two major intersections in the center of town to block anyone's re-entry in to the burned area. "I need my meds and they're in my house!" someone we know told them. "Sorry, you can't go in," was the standard reply. You can't blame them. If some poor sap actually went into their burned out house and accidentally triggered an explosion because of a improperly stored propane tank, or an exposed electrical line electrocuted them, guess who pays out the payment for damages?

We pulled up to the barricade on Spur Cross Road and the sheriff's deputy, eating a slice of pizza, leaned forward to tell us to turn around, but before he could say anything Hizzoner said, "I have a cat and a nephew in a house on Old Stage Road and I need to go save them."

We got a police escort to his house. A Sheriff's squad car followed us up Spur Cross with his flashing lights blazing all the way. We turned on Cahava Ranch and saw immediately the random, massive devastation. The fire scorched had one massive desert area and then it left another section right next to the burned area, pristine. Surreal is the only word I can use to describe it. We turned down our road and motored across a hellscape of blackened vegetation made even more ominous by the fading light. Burned out trees glowed a hellish orange. Some areas were so black, they sprouted random white ejaculations of something which only made it seem more sinister.

Tom pulled into his driveway and I got out and ran up the hill towards our property. All the underbrush was burned, but the bigger mesquite and palo verdes were still standing, although in the fading light I couldn't tell if they were alive or merely standing skeletons. 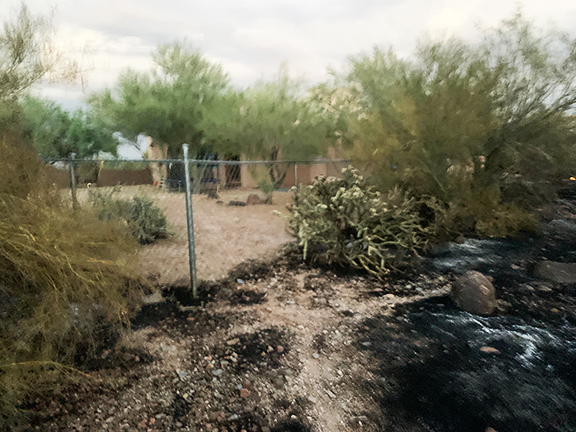 Our back yard burned to the fenceline

I went in the back gate and the back porch cloth screens were in tact and then I saw the breezeway furniture looking exactly as we left it and my heart soared. I opened the front door and smelled the breakfast still lingering in the kitchen. Everything was just as we left it. I got my wallet out of the bedroom and made a beeline to the studio. Every piece of art board and even a half finished glass of mimosa sat on my art desk. The house had been completely spared. But why? 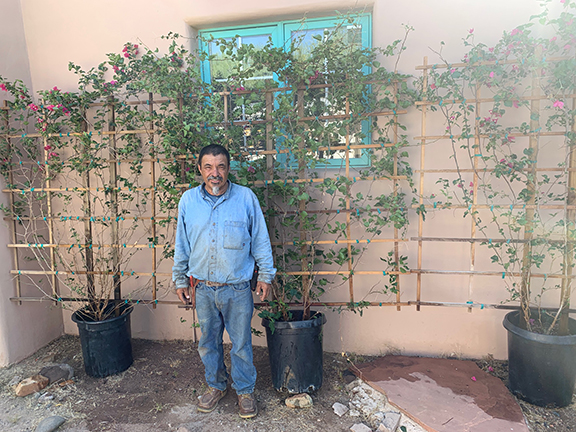 Meet Ishmael, a green card-carrying  Lutheran Mexican. Weeks ago, Kathy paid him to weed wack our yard (the weeds and underbrush were so thick he and another landscaper only managed to clear about a third of the front yard in two separate sessions).

I sincerely believe his proactive yard work saved our house. Oh, and it didn't hurt that we had the house built with block, not wood frame. Here's a good aerial of the Ocotillo Fire footprint. 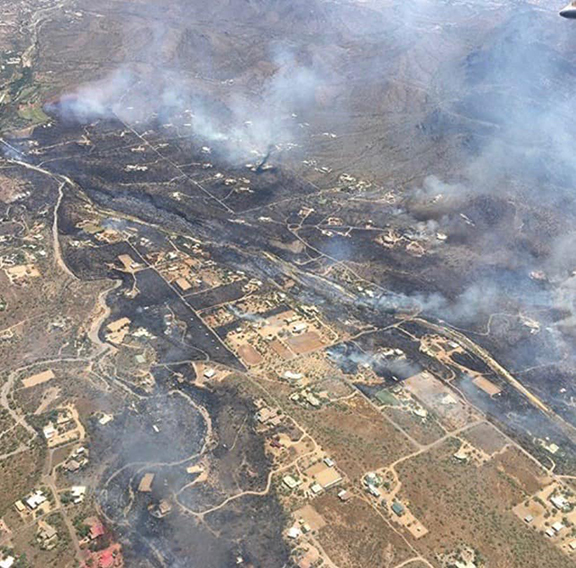 Our house is in the upper left quadrant, just to the right of the confluence of the two washes. Notice the random skipping of the fire on our side of the creek. And notice how thorough the fire was on the other side. I hate to admit this, because I am no fan of blading the desert, but houses were saved because of it. An eye opener to say the least.