May 31, 2020
Kathy lost her phone in the fire. She also lost her her computer and her car. We are lucky she didn't lose her life. 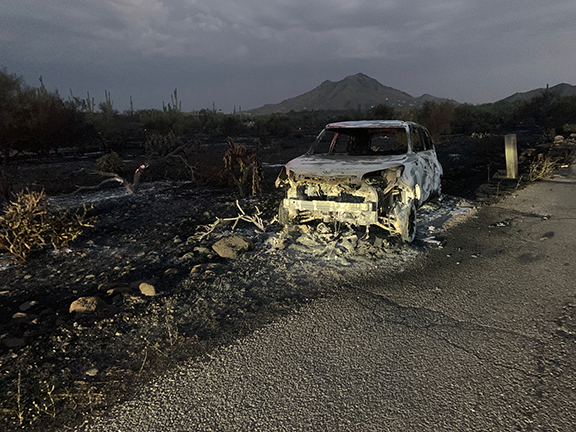 Yesterday morning we had Bud and Carole Glenn over for a brunch. John built our house back in 1987 and I remember the day he informed me it would cost an extra $20,000 to build it with block. It was a tough decision but we went with block. Over scrambled eggs, we laughed about the construction and all the pitfalls and problems that come with building a house. John free-handed our Santa Fe inspired fireplace and it is a wonderful piece of work and I told him how much I admire it every day.

We laughed and traded stories about our children, and then, after we solved many of today's world problems, the Glenns left. This was around 11 and I went out to the studio to work on a sketch idea I was pursuing. 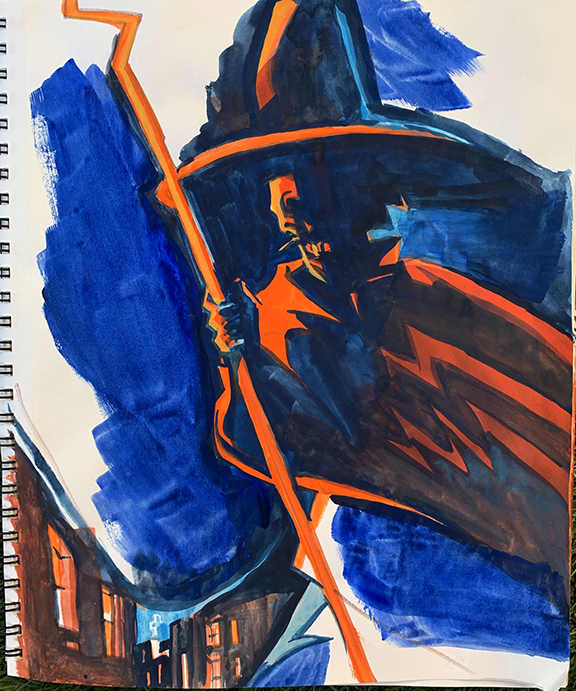 Daily Whip Out In Progress:
"El Pendejo In Firelight"

While I was painting, I smelled smoke and at first thought it might be my neighbor Tom barbecuing, but in a few minutes, I realized it was too thick for casual cooking and I walked outside and immediately saw the thick smoke billowing up from the south. 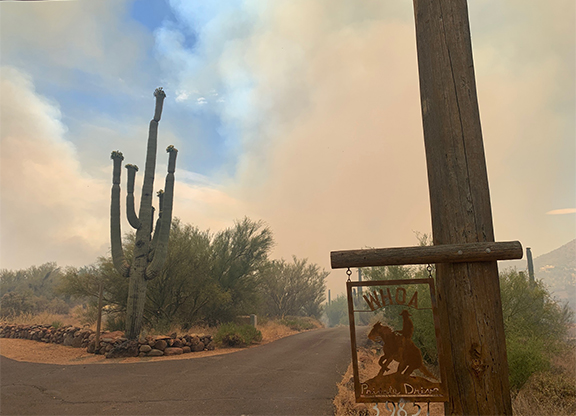 Thick smoke rising out of the south

This is about 100 yards south of our house. We heard sirens coming and at this time we didn't know how big the fire was, or whether we should evacuate. But we went through this same drill the previous week with the Seven Sisters Fire (to the west of us) and in that tense incident we felt like we left too early, so this time we waited. A fire truck came down Old Stage Road and took the road to the left, above. I thought perhaps they would simply put out the brush fire and we would be saved, which has happened numerous times before, but I was wrong. 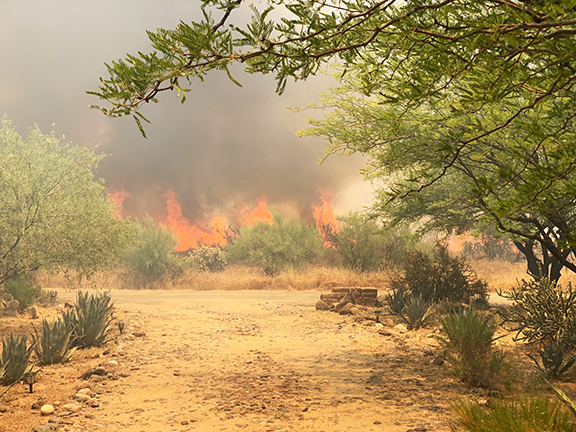 Tall flames at the end of our driveway

Five minutes later, the fire jumped into the invasive weed-choked, open desert across the street. This is when we decided to evacuate. Kathy took her car—a Kia—and her most important items like her phone and her computers and she went out the driveway ahead of me. I snapped this photo, above, which may have saved our lives, I don't know. When I turned the Flex out onto our narrow road that leads out, white smoke was billowing across the road obliterating everything. I drove into it, hoping it was just a brief obstruction, but it got worse and visibility dropped to zero. I gunned the Flex to muscle my way through as flames streaked across the windshield. I must have been going at least forty miles an hour when I cleared the fire and looked ahead of me, but I couldn't see Kathy. I looked in the rear view mirror and saw her car in flames. How I didn't run into the back of her on that narrow road, I will never know.

She got out and started running, but she left everything she needed in the car.

I took her to the emergency room and she has bad blisters but she is alive.