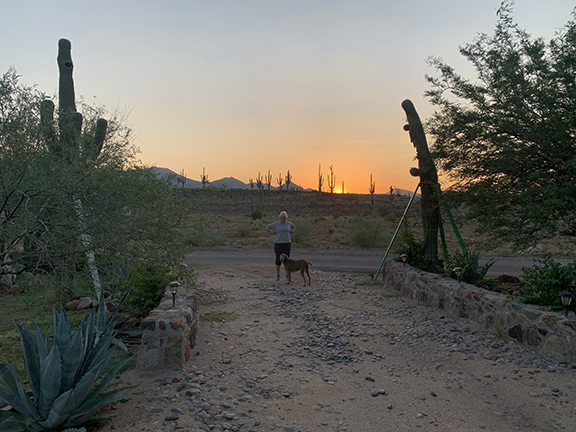 Two of my favorite things: an Arizona sunrise

So, here's the backstory. Kathy, Uno and I were walking out to the end of the driveway yesterday at sunrise and I complained that I missed the sunrise and Kathy said, "Let me take my big, American breasts out there and it will make it better." Ha. So, I HAD to use that line!

Meanwhile, it's time for somes much needed levity.

The Funniest Serious Headline I Saw Today:
Fauci Suggests Nicki Minaj's 'Swollen Balls' Vaccine Claim Is Just Nuts
—Huffington Post
Classic Onion Headlines From 9•11:
• U.S. Vows to Defeat Whoever It Is We're at War With
• Rest of Country Temporarily Feels Deep Affection for New York
• Open Casket Ruining Vibe at Funeral
Best Advice from The Old Vaqueros:
If you are ever attacked by a group of clowns, always go for the juggler.
Best punchline to an extended Norm MacDonald joke:
The set up: So a moth goes to a podiatrist. Then, the late, great Norm goes on and on about the moth pouring out his emotional troubles, and eventually, the podiatrist asks the insect why it came to a podiatrist rather than a psychiatrist. And, the moth says, "Because the light was on."
And, one more Norm-ism:
"I am basically interested in finding out the truth, but I just hope it's within walking distance."
—Norm MacDonald (1959-2021)
Posted by Bob Boze Bell at 10:54 AM