My Tombstone Touchstone—Once Is Definitely Not Enough

It was a cold and blustery day when my eight-and-a-half month pregnant wife broke down in tears at the O.K. Corral. Well, technically, she was not in the corral, but she had waddled over from the side yard next to Fly's Boarding House when she couldn't take it any longer. When I saw she was upset, I said, "What's wrong, Honey?" And she said—in a rather accusatory tone—I might add: "How many times have you been here?" I thought for a moment and replied, "About six times."

"Wouldn't once have been enough?" was all she could muster between sobs.

Well, it was a legit inquiry but I think you already know the honest answer to that question. 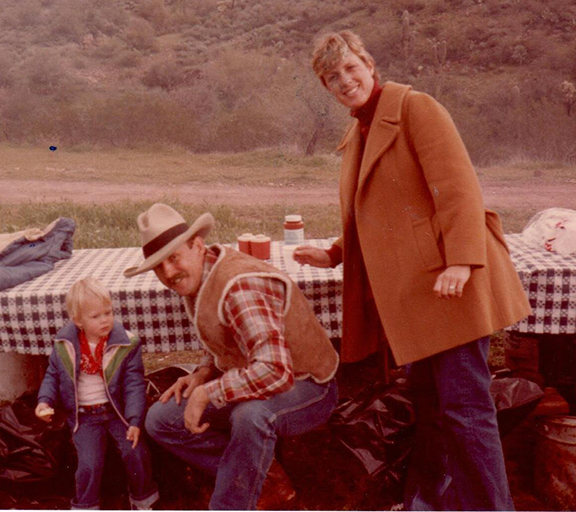 The resulting baby and her parents
a year later at the O.K. Corral Riding Stables
in Mesa, Arizona.

I went back again for the centennial of the gunfight in October of 1981, and then again almost every year for the next several decades, up to and including the 125th anniversary. From then on it has been an on again-off again ritual but the place remains a touchstone to me. I feel, ahem, grounded there. It's where it happened, man. It's where they walked. It's not necessarily hallowed ground but it is sacred enough for me and my kin. And, by kin, I mean, anyone who loves the movie "Tombstone" and thinks Doc Holliday is the patron saint of wise acres (thanks more to Walter Noble Burns and Kevin Jarre than to the real dentist, but still.)

Meanwhile, my lovely wife of 42 years has never been back to the O.K. Corral. Once was certainly enough.

"I'm not quite sure how you pulled that off."