Finally, The Probable Genesis of The Tucson, Arizona Lyric In "Get Back"

Big storm blew in last night and scattered all the newspapers stacked in the breezeway willy nilly and out through the front gate. Knocked over a flower pot. Three chairs ended up in the pool. Knocked down the patio clock. That kind of storm. Even rained.

In the spring of 1969 I was coming out the front door of the University of Arizona Art Building when a fellow drawing student told me she heard a new Beatles song on KTKT and the first lines mentioned the Old Pueblo prominently. Wow! Really? I wondered why the Beatles would know about Tucson, of all places? The word quickly spread around campus that Linda Eastman had been an art student at the U of A a couple years prior (1962-63-ish).

Later, of course, Linda married Paul McCartney and they bought a ranch out on east Tanque Verde, and both were seen all around the Old Pueblo, but I always assumed she was the connection to the song lyric, "Jo Jo left his home in Tucson, Arizona, crossin' California grass. . ."

The Real Genesis of The Tucson, Arizona Lyric

I have been watching the opus "Get Back" on Disney+ and it is enlightening, painful, beautiful, petty and tragic. For starters I can't believe how young they were, with John, the oldest at 28! Because Peter Jackson put back in so many jams and details we get to see, in sometimes painful detail, over several days, how Paul's classic ditty "Get Back" comes to fruition. One mind blower is the song started to go off into a protest song to make a statement about all the anti-immigration demonstrations in England. At one point, Paul scats something like, "Rami Estalami was a Pakistani but he knew it couldn't last. . ." and, of course, this gives the chorus, "Get back to where you once belonged," a whole different meaning. Eventually, Paul moves away from that and kind of wants something more "Western" and he adds "Arizona," to the end of the stanza, but it needs a syllable before it and then he throws in "Tucson, Arizona," and we see and hear this exchange, with John asking the question: 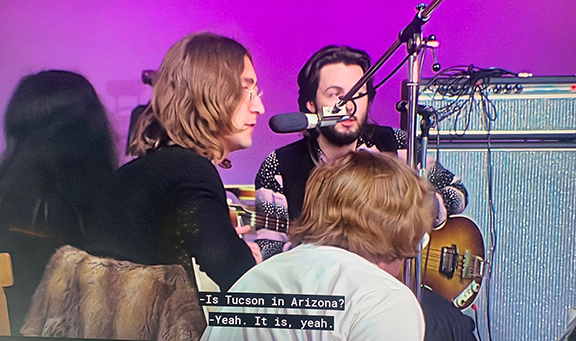 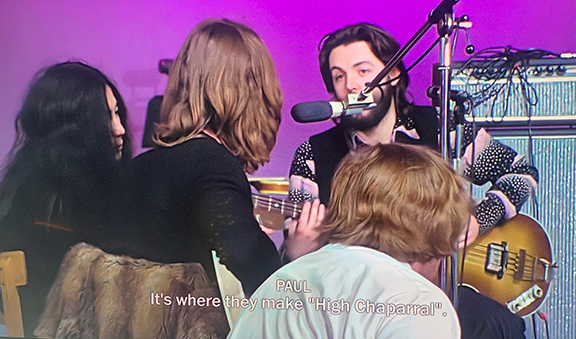 In addition to Yoko, above, Linda Eastman is also in the sessions and we learn that she is PG and she and Paul are planning on getting married. I wonder if they were watching the telly and she told him, "You know this TV show we're watching is filmed in Tucson. I went to art school there and we should visit some time and buy a ranch"?

"Sweet Loretta Martin thought she was a woman But she was another man. All the girls around her say she's got it coming. But she gets it while she can."

—The Beatles "Get Back"