Saying Goodbye to The Old Bison

We said goodbye to the Old Bison yesterday. 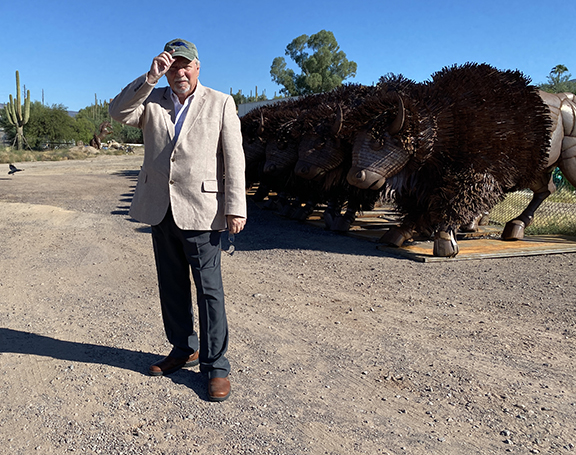 Yes, that is a raven taking flight, at left.

The Distinguished Professor Paul Andrew Hutton flew in for a memorial celebration of life for the esteemed Robert M. Utley. Kathy and I picked up Paul and his wife Tracy at Sky Harbor and brought them out to Cave Creek. Driving by Retablo on School House Road we spied a long line of iron bison sculptures lined up and I knew we had to stop and take a photo.

Death On The Trail Revisited

One of the casualties of deadline work is not having enough time to complete a complicated vision. Case in point, here is a scene from the forthcoming book, "Hellraisers & Trailblazers: The Real Women of the Wild West" that I didn't have time to finish. This morning I added the distant wagon train leaving behind grieving mothers and wives still distraught, standing at the hasty graves of their loved ones. Believe it or not, this happened almost daily on the Oregon Trail wagon trains. 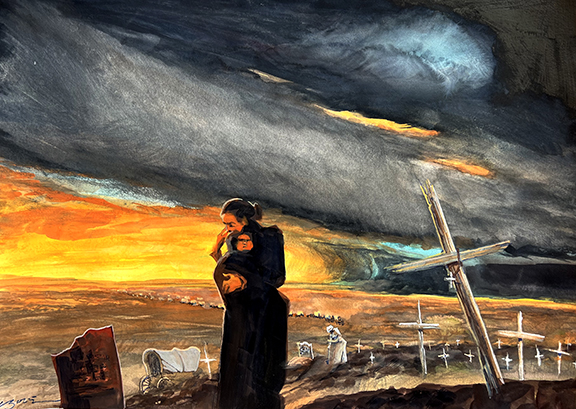 Blow Back On Billy Issue

"I'm reading the Billy issue of TW featuring the new book by Mills and your latest Classic Gun Fights version of the night of Billy's death, which are very different. In fact, I went back to my earliest Illustrated Billy and it differs from the 'Final Word' version too.   Most of all, in your Classic GF counter punch to Mills's version, you boldly claim. 'In my opinion the Kid was unarmed'!  (What?)

"But in the Final Word and this issue's Classic GF, you tell how he 'slipped into her bedroom and when he heard a noise he dropped to the floor..... and like a cat slipped across the hall into Pete's Bedroom to investigate. Do you really believe that Billy the Kid would sneek into Pete's room to investigate the strangers outside the house without taking a gun or knife with him?.  I just can't see the logic in your claim of 'unarmed.'  Sounds like a BLM claim (Billy's Life Matters) 'Unarmed man gunned down by Cop!' You owe your readers an explanation of your thinking. And to top if off, a few pages later, Stuart praises the Mills book as the Billy Reference that old west scholars have been waiting for. I know one history scholar who doesn't buy Mills version of that night."
—Allen Fossenkemper
Fountain Hills, Arizona
Short answer: I did the accepted-official version of the Kid's death in my first AND second book on Billy the Kid, but on the third and final version, I had to tell the unpleasant truth, that the Kid was shot down like a dog, unarmed. His worst fear had come true.

"Criticism is something you can easily avoid—by saying nothing, doing nothing and being nothing."