December 14, 2013
Back from a quick Route 66 reference road trip. Left on Friday morning at 6:30 with my art director, Daniel Harshberger and our unpaid intern and camera operator, John Nelson. Stopped in Wickenburg at Ike's Cook Shack for a quick breakfast.

Got to Kingman at 10 and took this reference photo at Fourth and Beale Street for a painting I want to do of Lewis Kingman surveying the town streets (wanted to see what he could see if the buildings were gone, i.e. those classic buttes towards Coyote Pass).

At 10:30 we had a meeting with the board of directors at the Mohave Museum and discussed a big photo-art show to premiere in conjunction with the International Route 66 Festival to be held next August. Here I am with the director, Shannon Rossiter:

We also met with Jim Hinckley and John Waters about the book and the proposed show, then we headed out to the legendary Red Ghost Ranch: 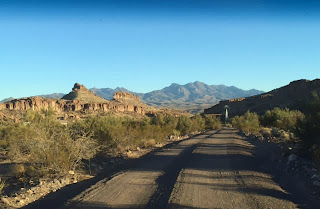 Took off this morning at 7:30 for a drive on The Road Most Traveled. Stopped beyond Valentine to capture this cut, which is the exact spot of a 1940s photograph we plan on running in the book:

And on through Ashfork and Williams. Landed in snow-covered Flagstaff at a very crowded Martanne's where we met up with Tom Carpenter:

All of us were ex-Kingmanites except Mr. Unpaid. Of all the bergs we saw I have to say I was most impressed with Williams. They really seem to have the creative vision on how a Route 66 town should look and feel. Made me feel a bit concerned about my hometown and I guess I have to agree with my friend Jim:

"Wake up."
—Jim Hinkley's advice for Kingman regarding Route 66