January 16, 2016
The big Vincent van Gogh-Buffalo Bill in Paris cover package went to the printer yesterday and now it's on to the limited edition book—Vincent van Gunfighter. I want to hone in on the Murder of Crows concept a little tighter, but I have a question: what's the difference between a crow and a raven? Turns out, not much, other than ravens have feathers on their beaks and crows do not, and the two have slightly different tail feather configurations. Got up at four this morning and called up some Google reference and did a couple dozen sketches of crows, mostly in flight: 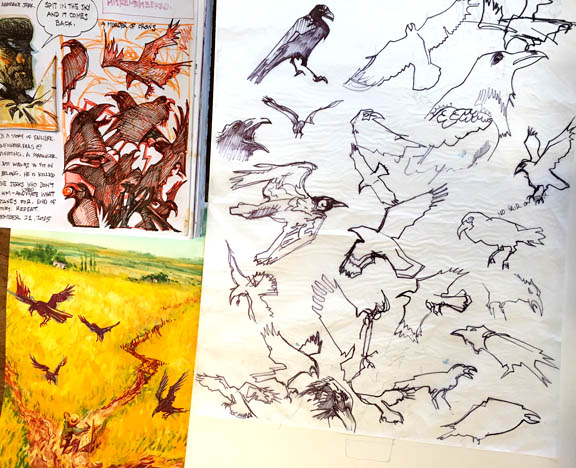 My production manager, Robert Ray, met me down at Santos Press at Cattletrack Compound yesterday and we are going into production on a limited edition book (100 copies). Going to be sweet.

"The value of repeated studies of beginnings of a painting cannot be over-estimated. Those who cannot begin, do not finish."
—Robert Henri