January 27, 2016
Had a surprise visit from Tommy Nallie of The Sons of The Pioneers today. The Sons had a couple concerts in nearby Surprise, Arizona this week and since they were in the area, Tommy dropped in to thank us for naming them Best Western Music Group in our January Best of The West issue. 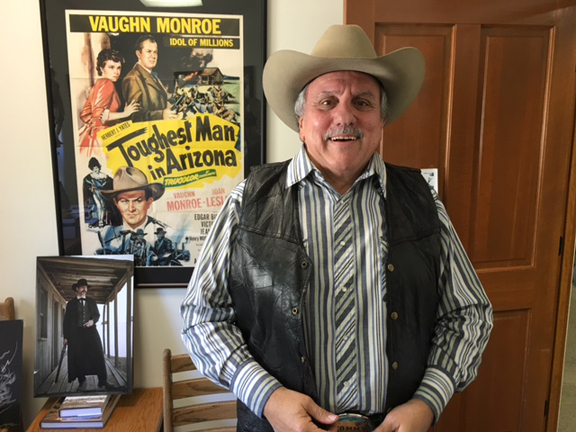 
I asked the Trail Boss how the touring is going (this is the historic group's 82nd year on the road) and Tommy told me this story: they were back east—I think he said Chattanooga—and after a show with Roy Rogers, Jr., the guys went into an Applebee's and requested a booth in the back. A perky, 30-ish, waitress came over and said, "I'll bet you guys are in a band." They nodded and said, "Well, kind of." And she said, "Don't tell me—y'all sing gospel!" And they said no, not really. She looked perplexed, so Nolen Berry, their manager, said, to be helpful, "Ever heard of Roy Rogers?" And she brightened. "Yes, of course I have. It's a drink."

"Our ignorance of history makes us libel our own times. People have always been like this."
—Gustave Flubert
Posted by Bob Boze Bell at 4:43 PM