February 21, 2016
Finishing up the Battle of Adobe Walls for the next issue. Goes to press in the morning. Some pretty amazing descriptions of the battle from the participants themselves. Here's Billy Dixon describing the initial Commanche charge:


Quanah’s Headlong Charge
“There was never a more splendidly barbaric sight. In after years I was glad that I had seen it. Hundreds of warriors, the flower of the fighting men of the southwestern Plains tribes, mounted upon their finest horses, armed with guns and lances, and carrying heavy shields of thick buffalo hide, were coming like the wind. Over all was splashed the rich colors of red, vermillion and ochre, on the bodies of the men, on the bodies of the running horses. Scalps dangled from bridles, gorgeous war-bonnets fluttered their plumes, bright feathers dangled from the tails and manes of the horses, and the bronzed, half-naked bodies of the riders glittered with ornaments of silver and brass. Behind this headlong charging host stretched the Plains, on whose horizon the rising sun was lifting its morning fires. The warriors seemed to emerge from this glowing background.”

An Examination of The Shot
In the summer of 2015, several re-enactors restaged Billy Dixon’s shot on the actual site. Members of the Wild West History Association went out to the site during their annual convention in nearby Amarillo, Texas. Quoting from their October 2015 journal, “To appreciate the significance of Dixon’s shot, it’s important to know that bullets do not follow the line of sight when fired. The arc-like course is affected by its rate of spin, gravity, air drag, temperature (it goes farther in warmer air), elevation (the higher the elevation, the more a bullet’s range) and wind.”

Dr. James A. Bailey of Wilmington, North Caroline, concluded that to have hit his mark, Dixon would have had to aim 35 degrees above his horseback target to allow for a 318-inch bullet drop.” [That is 26 feet!] “At nearly a mile, even a modern 30.06 round would drop at least six feet,” says San Antonio gun collector Kurt House. A 1989 scientific investigation of the shot, utilizing computer models, concluded, “Out of 1,000 simulated shots, only three hit the target at that distance.” Also, Bailey added, the “gritty buffalo hunter would have had to train his weapon 337 inches to one side or another [27 feet to the side!], given a wind speed estimated at 14 miles an hour.”

According to the above information Billy Dixon had to aim 26 feet above his target and 27 feet to the side, or, into the wind. That is indeed a "scratch" shot. 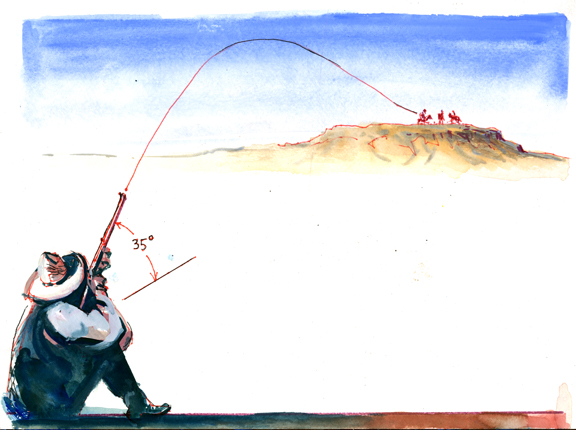 “He was either the best shot in the West, or the luckiest.”
—Roy Young