February 11, 2016
Got this constructive criticism from an artist friend of mine, after posting the image "The Snaggle-toothed Cop Killer," yesterday. 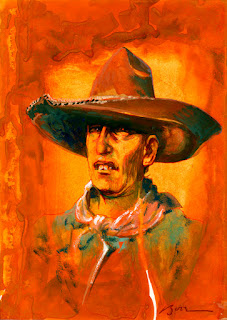 
"Your Kid looks too damn old and his nose ain't turned up enough like an Irish Leprechan. He looks more like me than the Kid! Other than that, you've captured him beautifully!"

And, by the way, the title of that painting I copped, ahem, from the daughter of a policeman, who watched the Nat Geo "New Evidence On Billy the Kid" semi-documentary with me. Her name is Mary Doria Russell, the author of "Doc" and "Epitaph." She confided to me she never has had much use for the little criminal. But back to someone who defends the Kid, and hated my Daily Whip Out: Ignoring the sarcasm, I emailed my Kid Krazy friend back and said I have never noticed a "turned up nose" on the tintype photo and that if anything, the nose appeared to be a hook nose. That only spurred the lad on:
"Double tough butt,, there lies the irony! He had the face of an angel, an innocent look. The boy with the tiger heart! The Wolverine inside the Lamb! Ranger Gillette said he would be the last one you would take as a bad man! That was his armor! This sweet little blond cherub would crack your crust!!! Coe said that bullies would naturally go after him, he would draw them in, then   look out, he'd eat-um fer breakfast! I'm surprised you haven't flashed on that--- thay all said it. Look at what happened to all the ones who tried it. Re-evaluate please."

Trying to be nice, I responded that I didn't know he, my artist friend, was such a "Romantic," which only set him off  even more."It almost looked ridiculous, all those armed men, surrounding this innocent looking youth. The Mexicans said his face went to every ones heart. Even Garrett and Upson said it! That he was the last man you would pick as a bad man."
So I thought, okay you damn Texas Romantic, how about this? And, then, in a fit of vindictive pique, I did this: 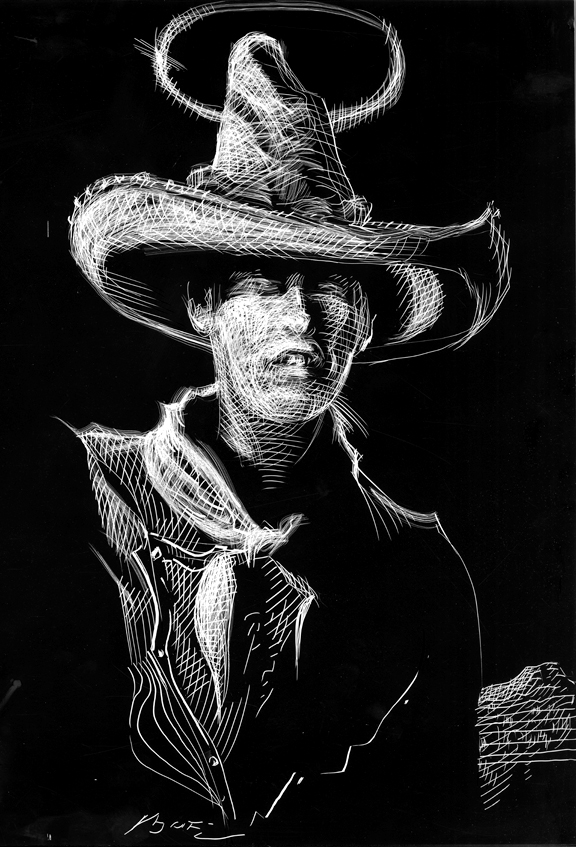 "The sick talking to the blind! The Blind scout and the Snake Bit Preacher!"
—Buckeye Blake, dealing with chemo, and responding to my Billy blasphemy