February 29, 2016
Spent the weekend auditioning skies. By that I mean I work quickly, laying in washes as fast as I can and with as little skill effort as I can muster. My number one goal is to let the washes go where they want to go. I often push this effect by grabbing the paper and tipping it one way or another so that the wet paint creeps across the paper, which sometimes creates some cool cloud effects. I'm also looking for "happy accidents" and with clouds, that is wonderful when it works, and painful when it falls apart: 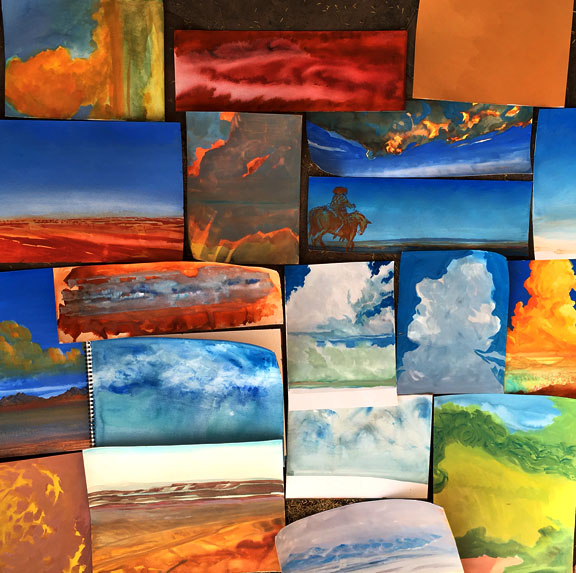 My biggest problem is pushing the effects too far, or, more accurately, trying to lock them down (see middle, right with the orange, stilted cloud bank). The best cloud starters here are the ones where I gave it a once over and then let it dry without messing with it. I took one of the simple ones and finished it before I came into work this morning:

Daily Whip Out: "Mickey Heads In"

That would be, Mickey Free heading into the foothills of the Sierra Madre, rippling in the blue distance. The Mickster is on his quest to find the Apache Kid.

"The boy's kidnapping started the final struggle for Apacheria—the longest war in the history of the United States. This conflict would leave a trail of blood from the Pecos River in Texas through New Mexico and Arizona and deep into Mexico from 1861 to 1886. All sides in that conflict blamed Mickey Free for starting it. In time, the boy would come to play a pivotal role in the war, moving back and forth between the harshly conflicted worlds of the Apache and the white invader, never really accepted by either but invaluable to both."
—Paul Andrew Hutton, in the prologue to "The Apache Wars"