February 8, 2016
Curator Cal and I met with the director of a well-known archival institution on Friday to discuss the possibility of donating my archives to their collection. It's an honor to even be considered and it's far from a done deal, but I'm pursuing it for the simple reason I do not want to leave my massive mess-oh-po-zania for Kathy to deal with. After my "Wipeout"—it will be eight years ago this March—I took a good, hard look at my sprawling piles of artistic "effort" and realized it was very unfair to dump—literally!—all of my crap on her. Which is exactly what would have happened if two of my bandmates in The Exits had not had CPR training just prior to our "last" gig at the Elks Hall in downtown Kingman. A great big thank you to Wayne Rutschman and Terry Mitchell. 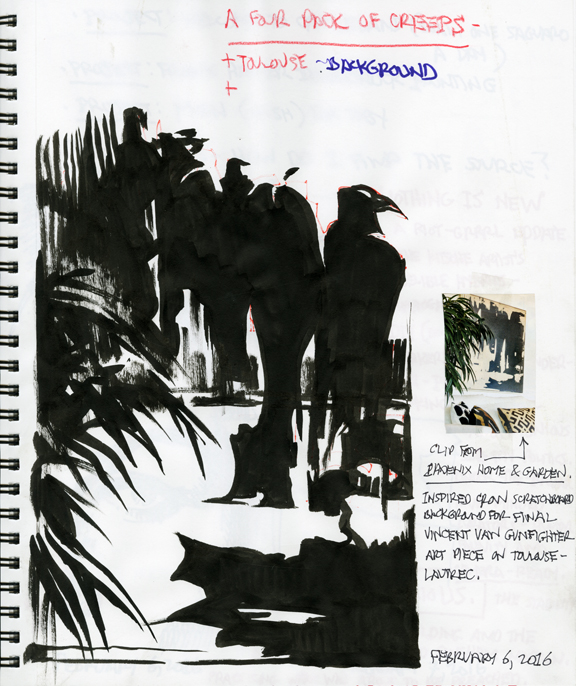 Daily Whip Out: "The Process Sketch #1"


And, so, thanks to Cal, I have a shot at donating an organized archive of one, long and crazy career. The categories are, to name just a few:

• True West Moments (in the Arizona Republic and Bridle & Bit)

The director told us that one of the aspects of the institution's efforts is to document The Process of an artist. This inspired me to take a closer look at my process. I have a well-developed eye for graphic inspiration, which is a nice way of saying, I know how to steal. I often look through catalogues and magazines to clip images or photos, or even artwork, that I think might have potential for something I want to pursue. Here is an example from last week. I was going through Phoenix Home & Garden magazine and found a small photo of a living room. On the far wall was an abstract painting with heavy blacks. I ripped out the photo and taped it into my sketchbook (above, and below) for the next day. I purposely put it in an odd spot on the page so I would be challenged by what to do around it. This stems from a lesson I learned from the ex-boyfriend of Linda Ronstadt, who played lead guitar and he told me, during a break at the Red Rooster Bar in South Tucson, that he plays himself into a corner and then tries to get out. The results of my being in a corner are on the left. Using black ink and a paint brush I mimicked the photograph (notice I copied the plants in front of the photograph as well). 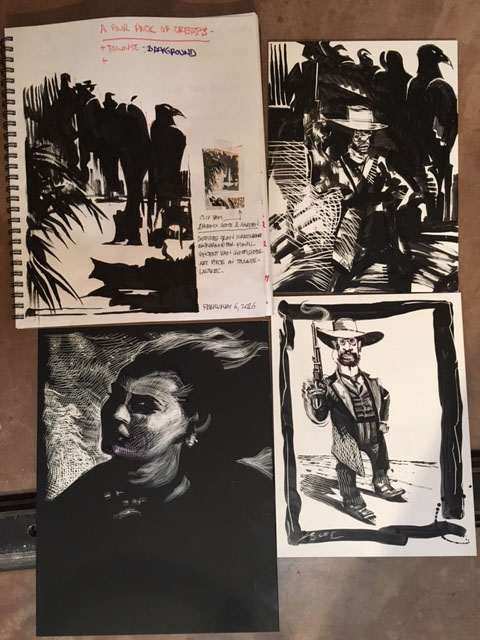 There are no crows in the photo, or in the painting on the wall, but you can see there are crows in my interpretation because I've got crows on the brain, given my Murder of Crows—Vincent van Gunfighter current state of mind. This study led to all the other images, above. And, by extension, as the weekend progressed, it led me to here: 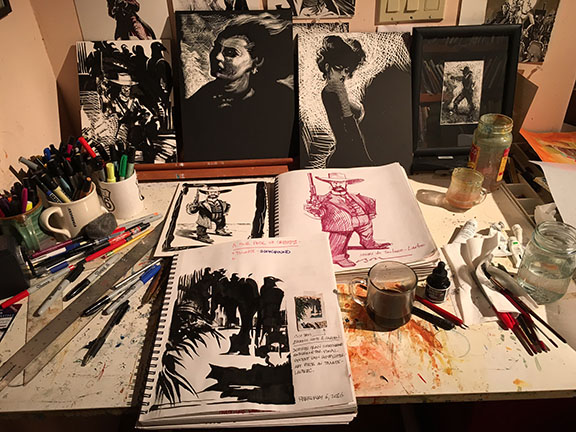 Daily Whip Out: "The Process Sketches #3

As you can see, one thing leads to another and then another, but in the end it's all connected. But then, so is everything in the world.

"Pleased to meet you, hope you guessed my name. . ."
—The Rolling Stones

"The devil is in the details."
—Old Vaquero Saying

"I plan on stealing myself a living."
—Billy the Kid