February 18, 2016
I'm working on the second fight at Adobe Walls for the next Classic Gunfights in the April issue. In 1874, the Commanche Warrior (and son of Cynthia Ann Parker) Quanah Parker led a combined force of 250 Commanches, Kiowas and Southern Cheyenne against a stubborn knot of hide hunters holed up on the Canadian River not far from present-day Amarillo, Texas.

The In-dins hated buffalo hunters for obvious reasons but in this instance they were keyed up because of the blustering claims of a self-proclaimed messiah-like medicine man named Isa-tai, who actually convinced a whole bunch of otherwise intelligent people that his medicine was so strong (puha, the Commanches called it) that they all would be immune to the White Man's bullets. 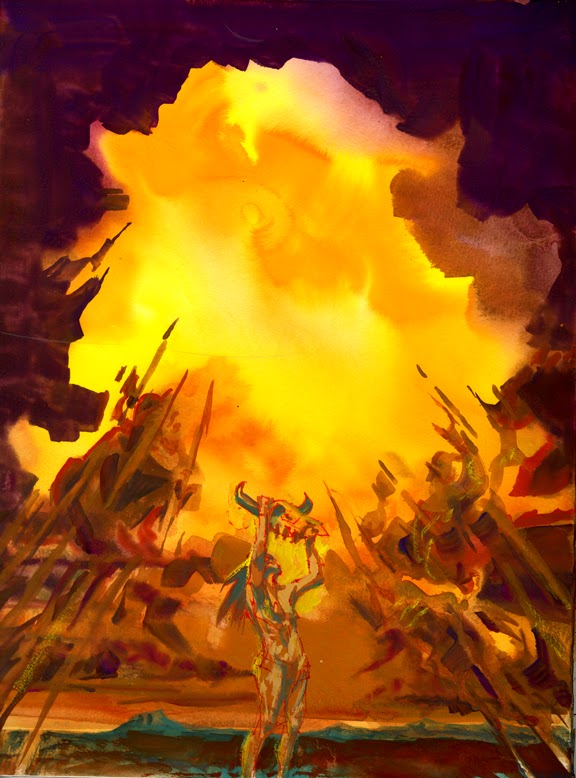 Add to this absurdity the fact that Isa-tai showed up for the attack, stark naked except for a cap of sage stems, and painted completely yellow, as was his horse. If you know your history, you know the attack on Adobe Walls did not go well. For starters they were attacking 28 buffalo hunters armed to the teeth, not only with pistols and repeating rifles, but with long range "Big Fifties" Sharps rifles and the requisite "sharp shooters" to man them. One of them was 20-year-old Bat Masterson (yes, THAT Bat Masterson) and another was Billy Dixon, who proceeded to drop a warrior with his Big Fifty at an alleged 1,530 yards, which is just short of a mile. Dixon had to factor in a six foot drop of the arc of the bullet and a 14 mile an hour wind, which necessitated a 337 inch sideways adjustment, cheating to the side against the wind.

In addition to the combatant knocked off his horse, more than 25 other In-dins were NOT impervious to White Men bullets and died before the rest of the attacking party departed in humiliation.

The kicker to this sad story is that for most of the Twentieth Century historians have fudged Isa-tai's name as "Coyote Dung," when, in fact, his name more accurately translates as "Wolf's Vulva" or "Coyote Vagina."

So, in the current climate of choosing leaders based on their belligerent claims of  kicking our enemy's asses, remember the outcome of Coyote Vagina's boasting.

"I know how to deal with our enemies. I'm Coyote Vagina and I approve of this message."
—Isa-tai