February 20, 2016
Spent the day down at Cattle Track Art Compound working on the letterset, hand-printed edition of "Vincent van Gunfighter." These are the four guys who have made it happen: 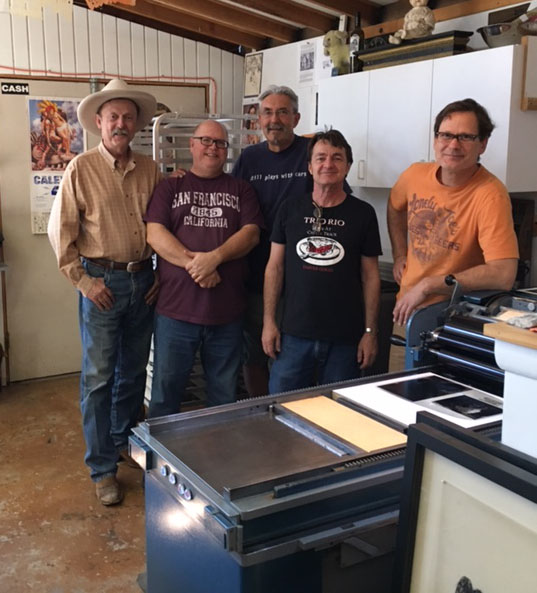 Had fun, drank a couple beers, hand cranked the press and didn't lose any fingers. 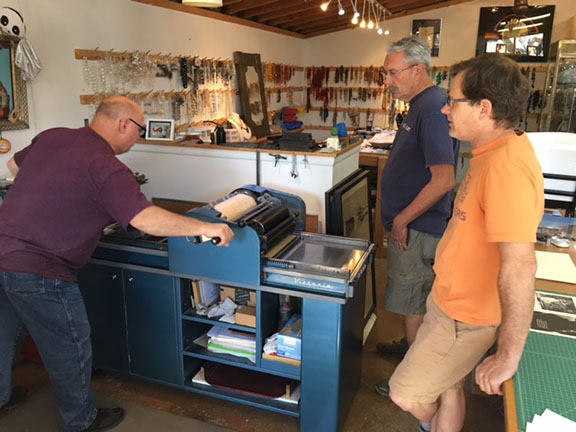 In many ways, I feel like we've come full circle. Back in the beginning (1972) Dan The Man and I printed the Razz Revue—an alleged humor magazine—on an AB Dick 360 which wasn't much bigger than this. We farmed out the collating to a Tempe business next to the Valley Art Theater. I remember taking the "guts" out there and watching a small crew do our job with stitchers and paper cutters. The foreman was drinking and showing off and he ended up chopping off the ends of his fingers in a moment of frivolity. He ran out onto Mill Avenue and was leaning over the curb crying out in pain. I followed him out and asked him if the job was going to be finished on time.

Well, not quite, but it was bloody hairy and it did happen and I often wonder where he is today.

We traded press war stories and I learned something I didn't know before. When a plate is finished, the pressman writes, or scratches the plate with big letters: NFG, which stands for No Flippin' Good, and, of course the middle word is not flippin'.

"Give me a hand here, will you?
—Old Pressman Saying