Revenge of The Comanche Moon

February 24, 2016
Here are the three images I wanted to add to the Battle of Adobe Walls story, but ran out of time. I wasn't happy with the first Whipout of the burning of Adobe Walls, so I did this one, this morning:

Daily Whip Out: "Revenge of The Comanche Moon

Someone asked how the Comanches burned down adobe buildings, since they were made out of mud. Well, tell that to the McSween defenders in Lincoln who fled, room to room, in a 10-room adobe, fired by piling wood on a porch and setting it afire, until the defenders, including Billy the Kid, were huddled in the last room—the kitchen—and had to make a run for it as the flames licked at their hot, little behinds. Wooden ceilings, and vigas (log poles in the ceiling), helped, as did wooden doors and wooden furniture, but in the Adobe Walls firing, I imagine the Comanches dragged over a bunch of tree branches (as you can clearly see above) to stoke the fire. Also, as Mark Boardman has pointed out, the adobe bricks in those days utilized grass, or hay, to mix in the mud bricks, and that burned, albeit slowly. At any rate, when white settlers finally arrived in the area (after the In-dins were put on reservations), all they found was crumbled adobe walls, which is probably how the location got its name.

I also wanted to do a painting of Billy Dixon taking his legendary shot. 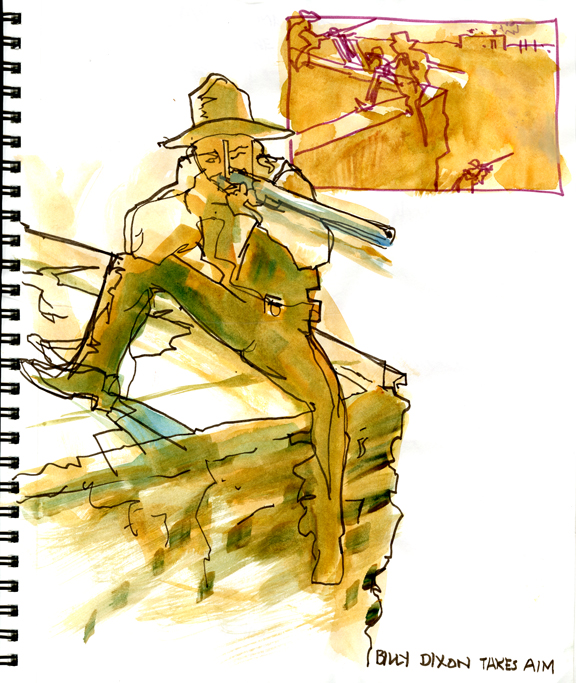 For this scene I wanted to show him on the roof of one of the buildings taking aim, and with other sharp shooters coming up to join him, on a ladder. I don't think I've ever read where exactly Dixon was when he took his famous long shot, but, for some reason I picture him on the roof. I do know during lulls in the fighting, some of the hide hunters went out and dragged off dead horses and oxen, and it would make sense to have men on the roofs for cover and to spot any lurking attackers. Anyway, didn't get this one in the can, either, beyond a gesture sketch. May still do it, if I can find the time..

I also was intrigued by the fact that there were 28 men and one woman in the camp. What the hell was she doing there? I have a hunch: 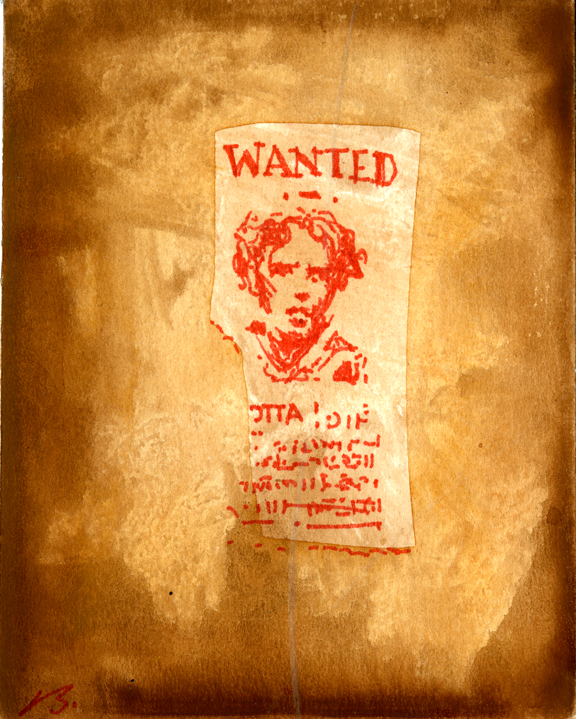 Daily Whip Out: "A Wanted Woman"

"He grunts, he looks cold, he pretends to sleep in a horse's carcass."
—Caryn James, in The Hollytood Reporter, summing up Leonardo Dicaprio's performance in "The Revenent"