February 6, 2016
Had the final design meeting and pre-press review with the crew at Santos Press yesterday down at Cattle Track Art Compound in Scottsdale. 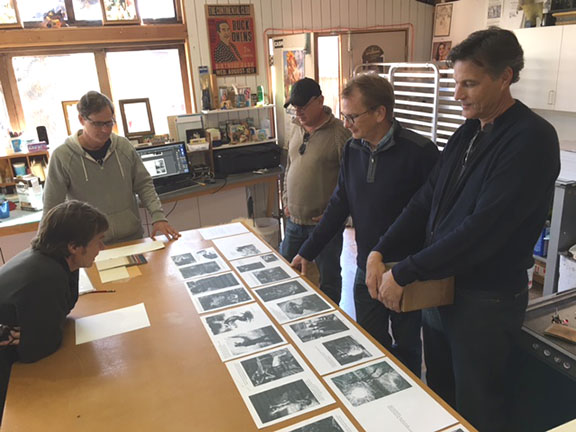 This is the scene as we locked down the final page count, images and copy for the limited edition book (100 copies) that premieres next month. The book will be printed and hand-stitched by Brent Bond, the gentleman standing at left. That's our leader, Mark McDowell, leaning on the table, and my partner Ken Amorosano, third from right. The other two gents are artists who dropped by to take a gander at the project. The tall one, at right, is the artist Dean Munkachy and his assistant Ron The middle guy, Ron, is Dutch and he, of course, pronounces van Gogh as only someone from Holland can, which is to say, as a cross between the clearing of the throat and something that sounds like "Van Gock-gggg-th" How they get three syllables out of that last name is beyond me, but they do.

The Brits are actually closer to an accurate rendering because they pronounce it as "Van Goff." How we Americans sledge-hammered that into "Van Go" is a humorous knock on our tendencies to champion anything that gravitates towards the-simpler-the-better. And, by gum, to us 'Mericans it LOOKS like van GO! 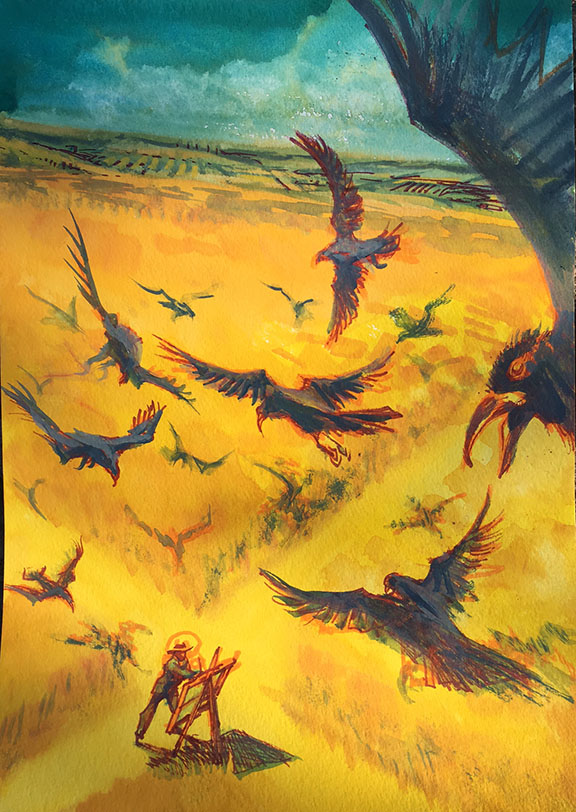 
The Vincent van Gunfighter art show will have 30 framed art pieces and the opening reception will be Saturday, March 5th from 1-4 p.m. at the Cattle Track Arts Gallery, 6105 Cattletrack, Scottsdale, Arizona 85250. Yes, the compound styles it as two words—Cattle Track—and the city of Scottsdale has contracted the two words on the road signs as Cattletrack. So, you see, the variations on pronunciations extends even to contractions of the names of streets. Especially to the names of streets!

"Vincent was especially struck by the mounds of hides and buffalo horns from America."
—Steven Naifeh and Gregory White Smith, in Van Gogh: The Life, chronicling van Gogh's impressions of Antwerp, 1885