Mickey Free: Back With A Vengeance

February 25, 2016
I was talking to the Top Secret Writer this morning and because of his forthcoming, epic book "The Apache Wars" there is renewed interest in Hollywood for our favorite one-eyed captivo. 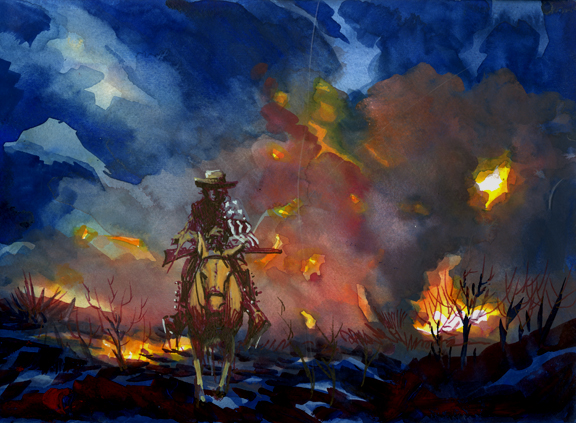 Daily Whip Out: "Mickey Free: Back With A Vengeance"

If you have been following along, you know the two of us attempted to do a graphic novel on Mickey Free, back in 2008, which pretty much failed. No, to be perfectly honest—it completely failed. Too many narrators, too much real history, not enough character development or plot. Humbling to say the least. When I hit these walls I try to learn something and when I try to learn something I usually come back to my lack of education. This invariably leads me to this:

Continuing Education
I decided about a month ago I needed to go back to school. So I signed up for a series of lectures on "How to Draw," taught by Professor David Brody, from the University of Washington. I received the 36 lectures in the mail about a week ago and I have been watching one or two every night. I never knew that humans have been drawing for about 80,000 years and that most of these drawings, until the 15th century, and the Renaissance, were pretty awful for a reason. Most people didn't have time for art of any kind because they were simply trying to survive, but occasionally, sitting in a cave usually, some weirdo would draw a goofy animal on the wall. The Egyptians actually had some decent portrait painters but they kept their skills secret and the skills died out after about 300 years. The Chinese kept the making of paper a secret from the West for a long time because it was a culture war advantage. But the shocker, to me, is it was actually the proliferation of glass windows that unleashed the study of drawing and how to do perspective and foreshortening. As houses moved from burlap coverings in their windows, to glass, more than one curious person began to draw on the glass,  copying, or tracing, what they were seeing on the other side of the glass. This led to the shocking realization that the roofline, across the street, moved back at an angle. No one had figured this out before (it took 80,000 years!). This led to an understanding, finally, of perspective, and the horizon line, which, as it turns out, is mostly geometry and math. Which is funny, to me, because I got into art partly to avoid math and here it is, squatting right in the middle of "How to Draw" good. Ouch! 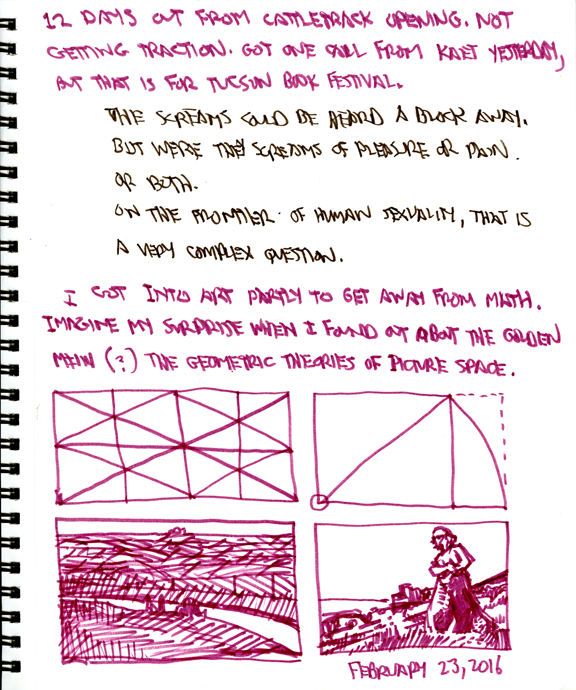 
It's ridiculous—and extremely embarrassing—to admit that I have been drawing professionally for at least 45 years and I didn't know any of this.

Or this: the Greeks believed in the golden rectangle (this goes back about 2,000 years to Euclid, a guy who thought up the theory, which is ironic because when I attended the U of A Fine Art College in 1967, I lived on Euclid Street in Tucson and had no idea of the connection). Anyway, Euclid believed in a golden triangle, basically a rectangle with a radius of 1.64 something (like I said, I have always hated math) and it is supposed to make your paintings better. Actually to quote from the text, "the height (b) to the overall width (c) is the same as the relationship of a to the height, a being the remainder if we subtract the height from the width. . . or a is to b as b is to c. Damn, I hate this!

Also, horizontal and vertical lines convey stability and diagonals create instability and action. I guess I knew this somewhat intuitively, but not really. 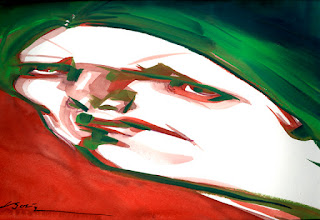 "The goal of all inanimate objects is to resist man and ultimately defeat him."
—Russell Baker
Posted by Bob Boze Bell at 11:16 AM