Midnight On The Colorado

November 27, 2016
Nice turkey day on Thursday over at Grandma Betty's. James and Somer are here from Hawaii and they stayed at our house. They left for Encinitas last night.

I am increasingly compelled to tell the story of  "an enormous whore." I realize this is "wrong" and unacceptably, not to mention—totally un-PC—but Sarah Bowman is described in vivid detail in the historical record, as such, and, although Larry McMurtry and Cormac McCarthy have both based characters on her, I don't think anyone has done her justice. And, by justice, I mean, tell her story without flinching. Part of the problem is that she is such a a conundrum: as already stated, "an enormous whore," who allegedly stood seven-feet-tall, a  madam, as well as a"pimp," a nurse, a war hero, a killer and a consort. She supposedly started the first business at Yuma Crossing, a whore house, of course. What she meant to the denizens of all those who passed through there and lived there is a cornucopia of extremes. Not sure I can pull off her story, but she deserves an honest attempt. 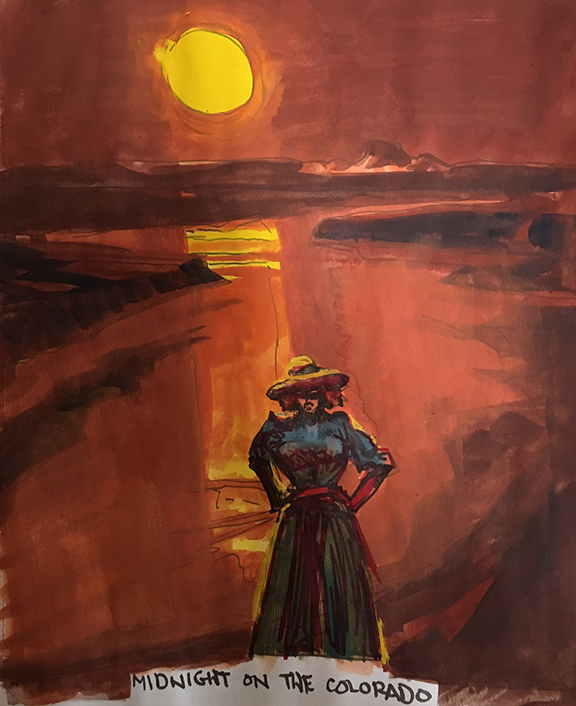 The Great Western:
Born in Missouri in 1812, Sarah’s maiden name was long ago lost to history. She grew to be an impressive woman over six feet tall and close to 200 pounds. She was blessed with a well-proportioned if ample figure, and an attractive face framed by dark red hair. Sarah had a great appetite for life and for men. She married at least three times and the name of her last husband, a German immigrant in the Second Dragoons who was fifteen years her junior, stuck with her. A fellow soldier was suitably impressed by Corporal Albert Bowman’s bride.

“Today we are reinforced by a renowned female character,” Private Sylvester Matson wrote in his diary on May 9, 1852. “They call her doctor Mary. Her other name is the Great Western.” He described her as a “giantess over seven feet tall,” with a scar across her cheek from a Mexican saber wound. The camp story was that she had killed the Mexican soldier that wounded her.

“She appears here modest and womanly not withstanding her great size and attire. She has on a crimson velvet waist, a pretty riding skirt and her head is surmounted by a gold laced cap of the Second Artillery. She is carrying pistols and a rifle. She reminds me of Joan of Arc and the days of chivalry.”

What are the odds of making this work? Perhaps a certain basketball player has the answer"

“I’ve missed more than 9,000 shots in my career. I’ve lost almost 300 games. 26 times, I’ve been trusted to take the game winning shot and missed. I’ve failed over and over and over again in my life. And that is why I succeed.”—Michael Jordan