November 12, 2016
I have always thought Donald Trump was a joke and I have never taken him seriously. Some would include me as a member of the "lamestream media," and I wear the badge proudly. There was no way, I said to myself when I went to bed early on Tuesday night, America was going to elect a bad joke.

We had a cowboy come in on Wednesday to renew his incarcerated son's subscription. The father, who is hispanic, voted for Trump. He couldn't say enough nice things about the president-elect. He wasn't alone. Close to 30% of hispanics voted for Trump. And 53% of women.

We weren't expecting any of this. On the other hand, I have to say, I expected this:

"TRUMP WON, you commie shmucks……..and remember, we all know who you are. This is a revolution, and you need to shaking in your boots. The Trump administration will reward its friends, and more importantly, remember its enemies. And you have exposed yourselves as the enemy by supporting the commie BITCH.
Again…we win, you lose."
—Hateful email to columnist Linda Valdez at The Arizona Republic

Or this, from the other side:

"My problem? You and idiots like you, full of straight white male privilege, who never understood the life-or-death stakes of sexism, racism and homophobia in our recent election."
—Janelle (no last name given) railing against a columnist in the New York Times who had the audacity to suggest we should "look for the best in each other and talk about it."

On the other hand, here's a post by my good friend Russ Shaw, Jr., who gave The Donald plenty of grief on his Facebook page for over a year now. Here is what Russ posted the day after the election:


"Donald Trump IS the winner.
I did not think this was going to happen. And it is NOT what I wanted or expected.
But it does not matter what I or anyone else thought would happen. He won.
Hopefully he will rise to the occasion. Maybe he will. I surely hope so!
If not, he will provide me (and therefore you) with at least four years of humor. And I promise not to be shy about that part.
But if he does a good job I promise to not be shy about that too!"
—Wonderful Russ

Now THIS is to me the kind of American I want to be. 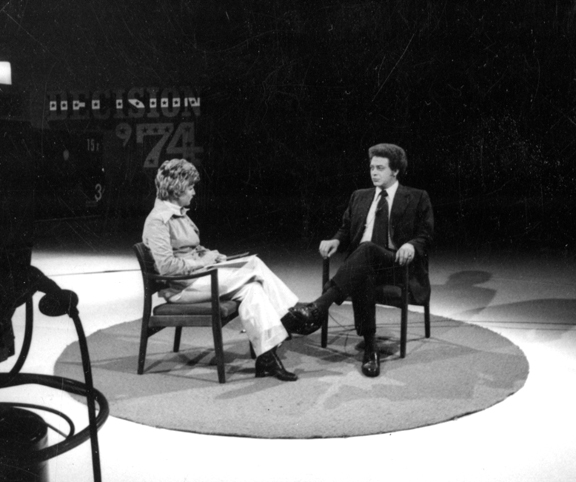 Russ Shaw, Jr. live on the Rita Davenport Show when he ran for Governor of Arizona
in 1974, as a write-in candidate.

Great Big Wonderful received over 800 votes. I am proud to say I was his campaign manager. Some people like to say the election was stolen from Russ by Jack Williams and some electoral shenanigans at a certain college (Al Collins Graphic Design Institute) but I won't go that far. I will say this, and I'm quoting Russ Shaw here: "I can't prove this beyond a shadow of a doubt, but I can say with some conviction, a whole bunch of Americans have had a humor bypass."

The biggest takeaway I've heard so far on what happened is this:

"The press takes Donald Trump literally, but not seriously; his supporters take him seriously, but not literally."
—Selena Zito, in The Atlantic