Custer Vs. Cody On The Worthiness of Mules

February 24, 2017
Thanks to Paul Andrew Hutton I copped this little exchange for our mule coverage in May: 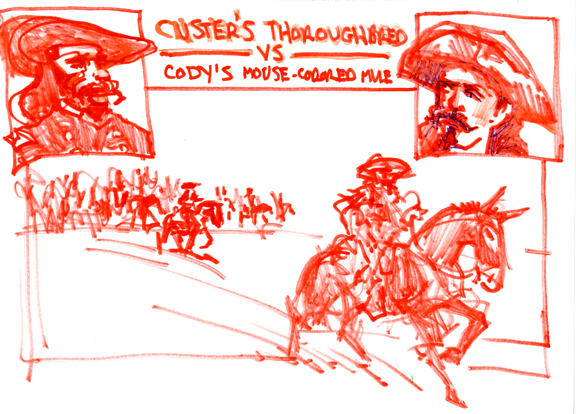 William F. Cody had an encounter with General George Armstrong Custer regarding the worthiness of mules vs. horses. Here is Cody's description of a march from Fort Hays to Fort Larned:

"Early in the morning, after a good night's rest, I was on hand, mounted on my large mouse-colored mule—an animal of great endurance—and ready for the journey; when the General saw me he said: — "Cody, I want to travel fast and go through as quickly as possible, and I don't think that mule of yours is fast enough to suit me."

"General, never mind the mule," said I, "he'll get there as soon as your horses. That mule is a good one," as I knew that the animal was better than most horses.

"Very well; go ahead, then," said he, though he looked as if he thought I would delay the party on the road.

For the first fifteen miles, until we came to the Smokey Hill river, which we were to cross, I could hardly keep the mule in advance of the General, who rode a frisky, impaitent and ambitious thoroughbred steed; in fact, the whole party was finely mounted. The General repeatedly told me that the mule was "no good" and that I ought to have had a good horse. But after crossing the river, and striking the sand-hills, I began letting my mule out a little, and putting the 'persuaders' to him. He was soon out-traveling the horses, and by the time we had made about half the distance to Fort Larned, I occasionally had to wait for the General or some of his party. We rode into the fort at four o'clock in the afternoon with about half the escort only, the rest having lagged far behind."

—William F. Cody, in The Autobiography of Buffalo Bill 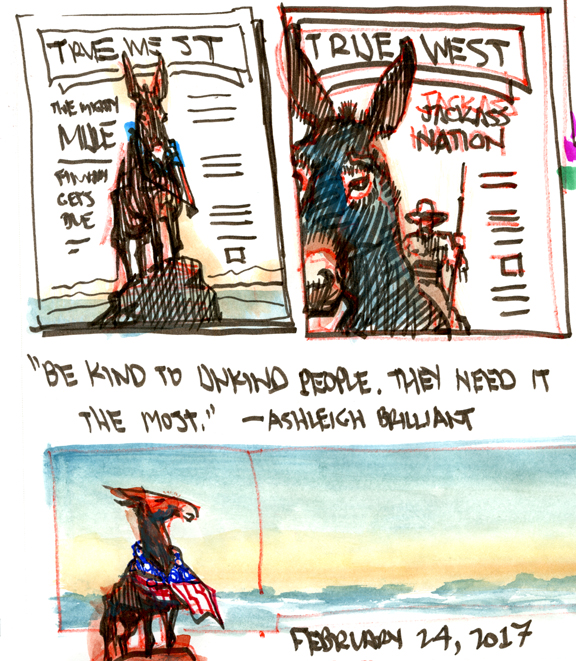 Daily Whip Out: "Cover Concepts for The Mighty Mule Finally Gets His Due

"Be kind to unkind people. They need it the most."
—Ashleigh Brilliant