A Two Gun Man vs. A Four Gun Man

July 6, 2017
Some armchair historians like to poo-poo the Two-Gun Man as portrayed in early day Westerns. The two-gun toting movie stars included William S. Hart, Hopalong Cassidy,  Roy Rogers, The Lone Ranger and others. The Armchair Boys claim that most gunfighters only carried one pistol as a rule and that the two-gun man is a Hollywood myth.

So it comes as somewhat of a giggle that there was perhaps a time when frontiersmen may have actually carried as many as four pistols. Check out this image of Capt. Francis Marion 'Dave' Poole (1837-1899) of Missouri. 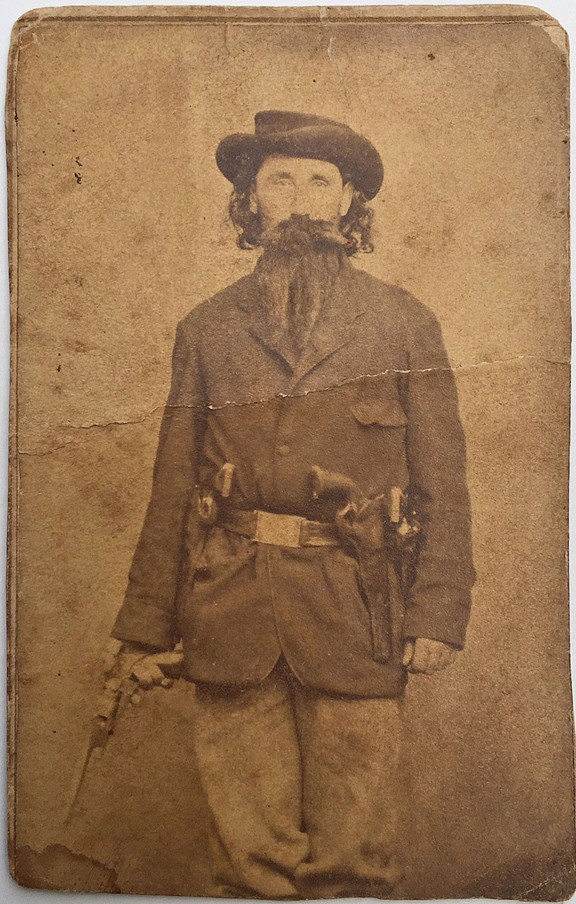 The Real Reason for The Two-Gun Man
The two-gun controversy has more to do with cap and ball pistols being difficult to reload—it was a slow and time consuming process—and in a skirmish, someone armed with four loaded pistols could do a lot of damage without having to stop and reload. And as some civil war buffs have pointed out to me, those old guerilla fighters often had even more pistols hanging off their saddles.

And it is true that Hopalong and the two-gunners on the Silver Screen carried later model pistols, which gives a grain of truth to the complaint about Hollywood building up the two-gun man, when in fact, the later gunfighters, Hardin, the Earps, etc. only tended to carry one pistol.

But enough about that. Let's get back to Dave Poole and what his obits had to say about him:

The Arizona Republic, May 31, 1899
Francis Marion Poole, better known as Captain Dave Poole died at 1:30 yesterday morning at his residence five and one half miles northeast of the city after a prolonged illness. His funeral was conducted by the Rev. E. McCreary and took place at the residence. He was a noted character in the days of the war. He early joined Quantrill's band and participated in all the stirring events which made that organization famous among its friends and notorious among its enemies. He was among the foremost in the Lawrence raid. Those that knew him said that he was a quiet man except in times when action was required. Major John Edwards in his book: "Quantrill and His Men" gives Capt. Pool a conspicuous place. At the close of the war, with many other members of the band, he settled down to peaceful pursuits. He was possessed of considerable wealth, most of which was lost by reverses while he was living in Texas.

The portrait shown, above, was presumably taken in Sherman, Texas, on Christmas Day 1863. It's a little ironic to me that Sherman is where Olive Oatman ended up after her ordeal in Arizona. Dave Poole went the other way, ending up in Phoenix, Arizona after the war.

My incomparable tracker, Gay Mathis, has unearthed another, longer obit that ran in the Weekly Phoenix Herald on June 1, 1899 and provides more details on this fascinating frontiersman. Selected quotes are as follows:

"He has been sick for several weeks, his illness developing into dropsy of the bowels which disease terminated fatally."

"He was born in Missouri about 61 years ago.  When the civil war broke out he was yet little more than a boy but in those days and in that region, there were no youths. Those who were no longer children became at once men and women."

"Though perhaps misguided [he led the "Guerilla charge at Centralia" and was prominent in the Lawrence, Kansas massacre], he was no coward and the work assigned to him was always accomplished or efforts exhausted in that direction."

"After the war he returned to peaceful pursuits unlike some of his companions [The James and Youngers, for example], and later moved to Texas, where he engaged in stock raising and where it was said he became very wealthy. Reverses overtook him, and some years ago he came to this valley [Phoenix, Arizona] settling west of town, but later moved on the ranch where he lived at the time of his death."

End of quotes. If his ranch was five-and-a-half miles northeast of downtown Phoenix in 1899, that would probably put it at about Northern Ave, somewhere east of seventh Street.

"Is it a bigger crime to rob a bank or to open one?"
—Ted Allan

This just in: Gay Mathis found these 1897 quotes from Frank James on the two pistol question:

"Each guerrilla carried two to four pistols. I nearly always carried two. I was small and slender and more than that number was too many for me."

"The stories about guerrillas riding with the reins of the horses between their teeth and firing with pistols in both hands is simply dime novel stuff."

"We always held our horses with one hand and the pistol with another."
—Frank James