The Rise And Fall of Royal French Erections

July 18, 2017
It never ceases to amaze me that the truth is stranger than any fiction you, or I, could ever make up. Bring France into the equation and the craziness goes off the charts.

The big takeaway of the French Revolution, at least for me, is that old paradigms break hard. The longer a system is in place, the more violently it comes apart. In the French case, the divine monarchy had been in place for 800 years and when it started rotting from the inside in the late 1700s, it went down hard. Based on a series of flukes, the Louis dynasty basically ended with the coronation of a fifteen-year-old king, Louis XVI (his dad died and then his older brother died, leaving an ill-equipped teenager to rule the mightiest nation on earth at the time). The divine right of Kings was being tested all over the place.

Creating an heir was a big deal in France and in addition to being the new, teenage King (The Twit King?), Louis was immediately married off to a fourteen-year-old Austrian bride (politics), who he met only two days before the wedding. Marie Antoinette was probably pre-pubescent, but, regardless, the court and the nation expected the two to GET EET ON, PRONTO! (as the Americans like to say with a blended French-Mexican accent)

Well, it took seven years for the young newlyweds to finally have a kid and the tabloids (at that time called libelles) had a field day, printing broadsides with headlines, like, "THE KING CAN'T DO IT!" And you thought today's press was hostile.

You have to trust me here, but it gets even more ridiculous.

For years historians speculated as to why the two could not have successful sex with some pontificating that the Twit King suffered from Phimosis, a congenital narrowing of the foreskin that made sex painful.

Recently, the historian Simone Bertiere, uncovered a rather shocking letter from Austria's Joseph II (he was the brother of Ms. Antoinette) who reported to the family, "[Louis] had a well-conditioned strong erection, introduced his member and stayed there for two minutes without moving, withdrew without ejaculation, then, still erect, wished his wife good night." 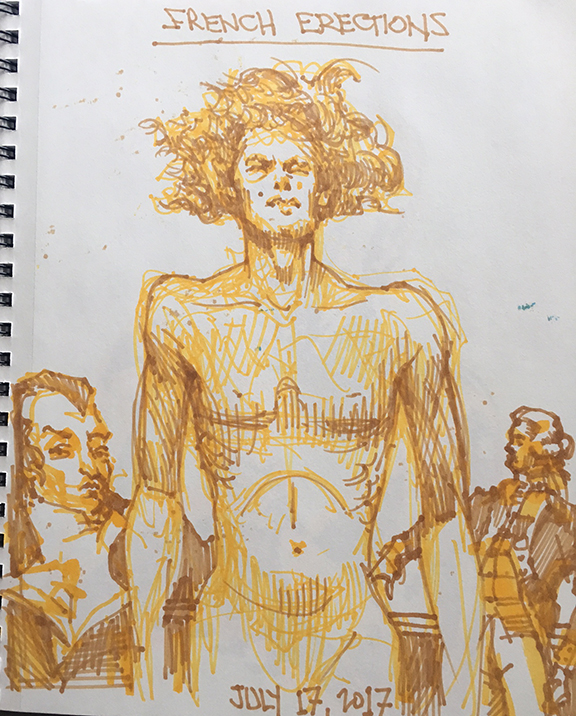 Her brother then added, as only a brother-in-law can, "He should be whipped like a donkey, to make him discharge in anger."

So, if you think our modern politics are somehow out of control, take a look at our shared past. It has always been this demented, it's just that no one had the nerve to tell you, until now.

"Those are my kind of people."
—Wonderful Russ, former president of the Wickenburg Clown Club