PAW! Hiii! & YAP! And Other Dang Peculiarities of Those Crazy German Westerns

July 26, 2017
Delving even deeper into the incredible fascination of the Europeans with the American West. A Croatian comics expert, Marko Fancovic, is explaining to me the history of these comics, so that I may see the Black Forest for the trees.  Turns out there is an Italian wing of the genre and a Franco-Belgium wing. And then, of course, the Germans.

Here's a good example of a German graphic novel utilizing their phonetic terms for sound effects in a Western. 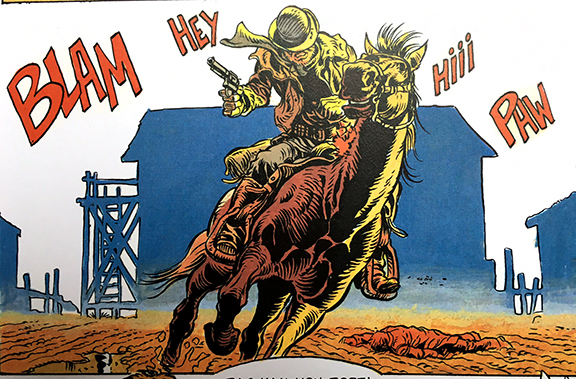 Bang For The Buck   Of course we Americans use "Blam!" but the Germans are quite fond of "PAW!" for Bang, but where does "Hiii" come from? Is it the high pitched cry from a guy who has been shot? Like in Hi-eeeh!? Or, is it, perhaps, the horse snorting? Inquiring minds want to know.

And here's another example of the YAP! And PAW! phenom: 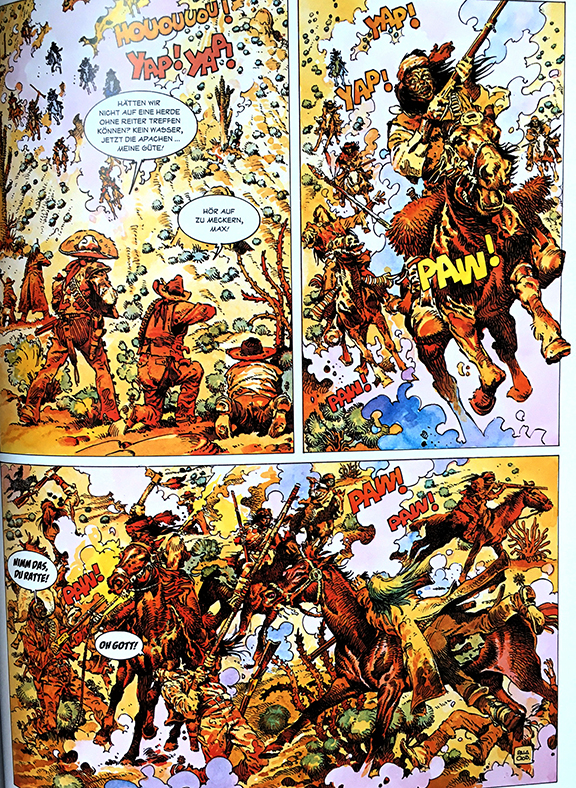 Lot's of PAW! Heavy on the YAP!


It's funny, I didn't come here looking for Western comics, I just stumbled onto it because of my son seeking out comix stores in Paris and in Germany. It's so crazy, to have traveled so far, to the Old World to find something so new about my home country—The New World. I feel like I have looked into the future to see the history of the past. Very exciting and, yes, weird as hell. 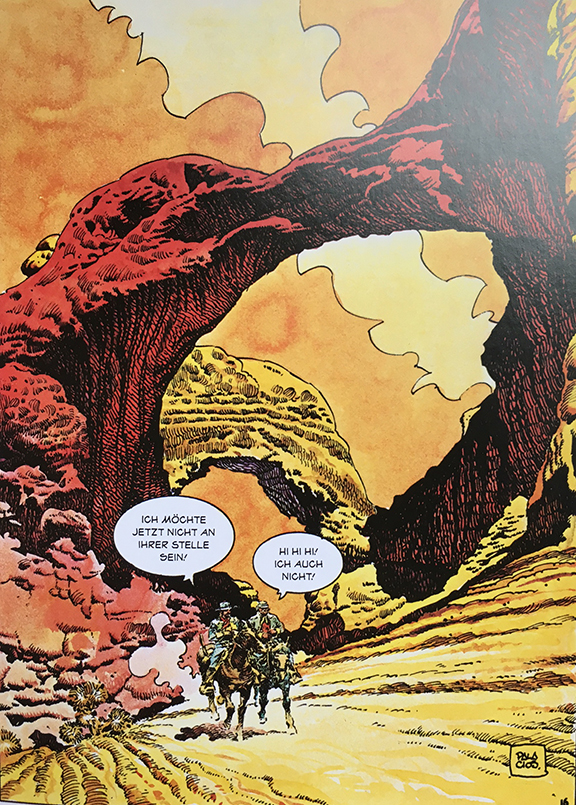 Window Rock or Rainbow Bridge, both in northern Arizona,
seem to be the inspiration for this stunning scene from the graphic novel "Mac Coy".

I asked Marko about why Lucky Luke and Lt. Blueberry never quite caught on in America. Both are huge successes in Europe but have never gained traction in the U.S. Here is what Marko told me:

The thing is, European relation to comics is quite different from the American one - there are two "schools" or approaches, you might say, the Franco-Belge one and the Italian one, and neither adapts well to the US 'comic book' format - it's just something the American audience isn't used to, a different way of thinking. Lucky Luke has a specific sense of humor that draws very much upon the European relation to western lore, which might be slightly off-kilter to US audiences. Blueberry, however - the best comic ever, any country, any genre, any medium - was I think wrongly marketed overseas. Many Americans are crazy about Blueberry; I've had numerous Facebook inquiries where Blueberry can be found in English, or laments that it was not properly published in the US and is out of print. There are also some other great European westerns - my favorite after Blueberry might be "Comanche" by Hermann and Greg.
—Marko Fancovic

The End of The Beginning
And, so how do the German's like to end their graphic novels? Like this:

A Shorthand version of The End, as Das Ende is German for The End.