July 2, 2017
Finishing up a couple takes on The Great Western for the splash page opening that will run in the next issue of True West. 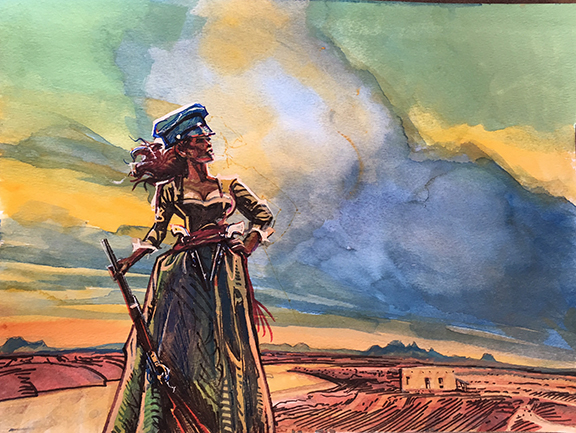 Daily Whip Out: "The Great Western at Yuma Crossing, Version One"


The problem with the above version is that she is too thin. Full disclosure, I modeled her after the photo of an actress in the Broadway play "Hamilton." I liked the costume, but I didn't put enough extra pounds on her and she is too svelte. Sarah Bowman was a big boned girl. More like this: 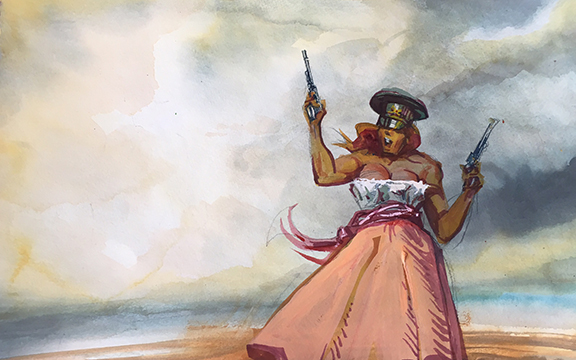 One of the most enjoyable aspects of being in the history biz is knowing the right people to contact in order to get to the bottom of things. Yesterday I found some great reference on the style of various campaign hats that the Great Western might have worn, but one detail eluded me. I sent this inquiry to The Top Secret Writer:

Paul,
Hey, I'm trying to portray Sarah's headgear from the Mexican War era, and that quote from a soldier who saw her, has her wearing a "a gold laced cap of the Second Artillery."

Jeff Pechtel told me the Dragoons wore a star on their caps and the Mounted Rifles wore a golden eagle on theirs. What might an artillery unit wear on theirs? A cannon perhaps? And where exactly do you picture the "gold lace" on the cap?

The Distinguished professor had a three word response:

So I emailed the U.S. Army historian, John Langellier, and thanks to him, this morning I got the specifics I needed on the insignia. So crossed cannon barrels with the number two in the middle. Dang cool beans! Now for the gold band. Sent this down to John: 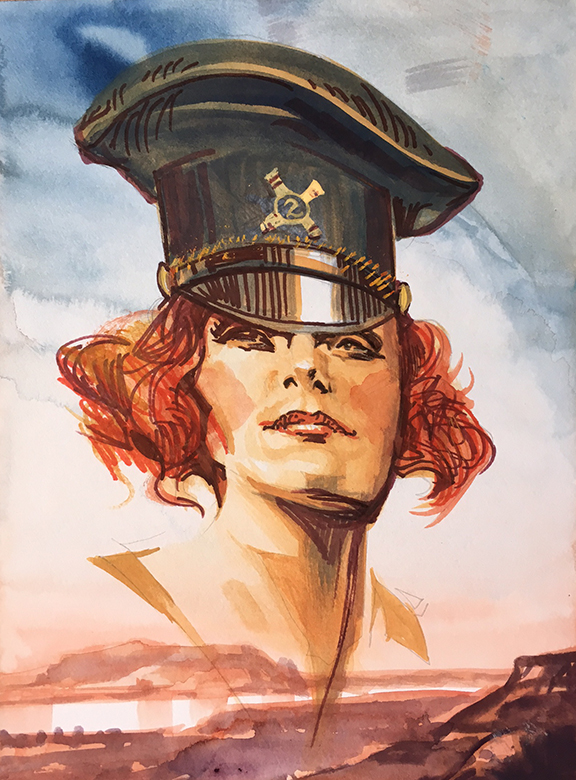 I still had one more version to finish and on this one I went for a little more of a sepia look, and, of course, my obsession with "swirling gunsmoke" showed up unannounced. A friend looked at this one and said, "She's a little butch, don't you think?" To which I said, "If you were six foot six and in the Mexican War and saw action, and then you were on the American frontier in Yuma, in those years, you would HAVE to be more than a little butch." 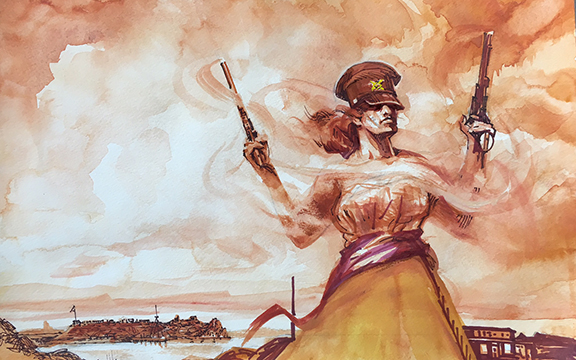 I've worked hard and I'mm so buggy, I can't decide which one is going to work best for the piece.

"If my father had hugged me once, I'd be an accountant right now."
—Ray Romano, standup comedian, on the nature of comedy