The President And I Help The French Celebrate Bastille Day

July 14, 2017
"Happy Bastille Day?" I asked the pretty young lass at the front desk at a Left Bank Hotel (not the name of the hotel, but where it's located). She told me I was a crazy American, because the French do not say this to each other. That's funny, I told her, "We say, Happy Fourth of July all day long in my country." Okay, it was about half true, but then, so is everything else you are about to read beyond this point.

Celebrating The French Fourth of July
The president and I flew in on the same day. He on Air Force One, myself on American Airlines, flight 786. We both landed at Charles de Gaulle Airport and exchanged pleasantries with the locals. We took separate conveyances into the city. He in a armored caravan, myself in a Senegal Cab company who ripped me off for 148 euros for a ride to my hotel. To the criminal Senegal company's credit, the driver showed me all the back street, which I had never seen. 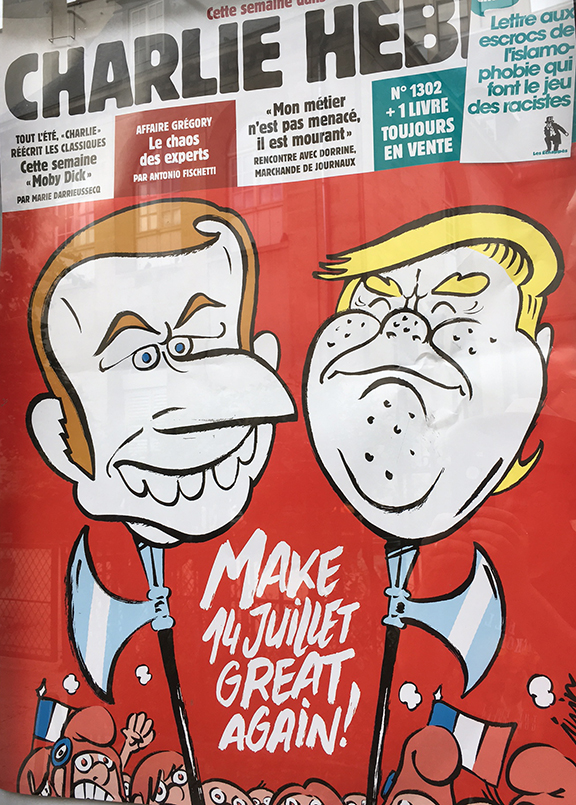 The Humor Magazine Charlie Hebdoe and its take on Trump and Macron
together on Bastille Day, "Make 14 July Great Again"

Like most Americans I don't know jack about French history. Here is a primer: in the late 1700s the French, who had helped us gain our independence in 1776—mainly because they hated the English‚ and wanted to stick it to them—came to their own day of reckoning. The French were the center of the civilized world at the time, but because of increasing income disparity between the rich and poor (sound familiar?) and a clueless elite (ditto), the poor rose up and attacked a fort north of our hotel (The Bastille), which was at that time a prison for invalides (a nice way of saying, the insane). The Bastille was erected as a fort to defend against the English (see above), but by this time housed a couple of idiots and the Marques de Sade (yes the guy who sadism is named for), but he was transferred out ten days before this happened. With really nobody to defend the place, the commander, the Marquis de Launay, surrendered to avoid any more bloodshed. In appreciation for this, the mob marched him down the street, beating the crap out of him all the way. He finally got tired of this and kicked a guy standing next to him, in the nuts, saying at the same time, "Enough! Let me die!" So they stabbed him to death and sawed off his head and put it on a pike and paraded it around town, gloating at killing a guy who had surrendered to avoid bloodshed.

So then the rioters dismantled the entire Bastille, brick by brick, and sent the bricks out to all the french provinces so they could build little replica Bastilles to honor killing the guy who kicked the guy in the nuts.

And that is what we were celebrating today all over Paris.

"Let them eat cake."
—A poor choice of words by Mary Antoinette
Posted by Bob Boze Bell at 11:45 AM