Why Aren't Comics About The American West Popular In America? Part II

July 25, 2017
I sent out a call to my history gang back in the States to help me understand why European comics and graphic novels are still celebrating and buying graphic novels about the American West and in the U.S. it's a dead letter deal.

But before we get to that, I have been attempting to read my German comics and they do this crazy mash-up with their native tongue and American Western slang from movies, to wit: 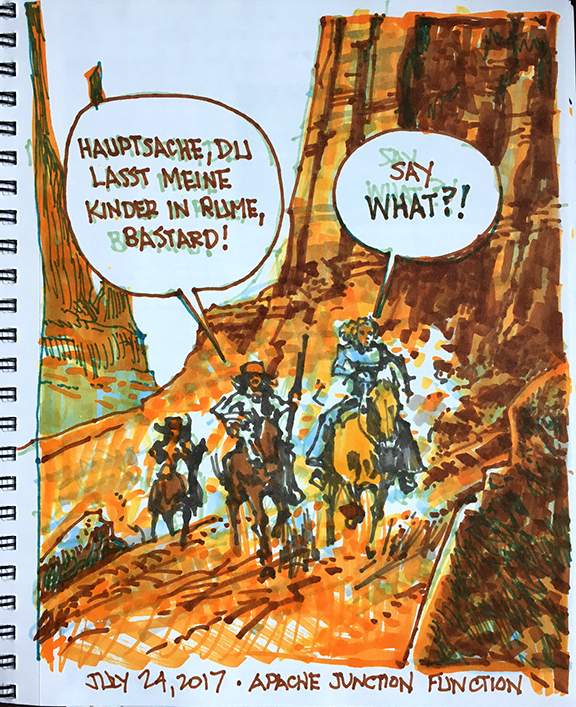 
The Top Secret Writer's Take On Why Europe
Still Gets The Wild West
"Those folks take the long view on history (since they really have a history as opposed to our 200 years) and with the exception of WWII are pretty much over it all. They have had so many colorful heroes and villains that they don't sit in lofty moral judgements over their ancestors (no banning of images of Cavaliers or Roundheads in England). Hell, when Napoleon is your national hero how can you get upset over Custer and the American Indian Wars. Plus, thanks to Buffalo Bill, they remain captivated by the American West.
—Paul Andrew Hutton 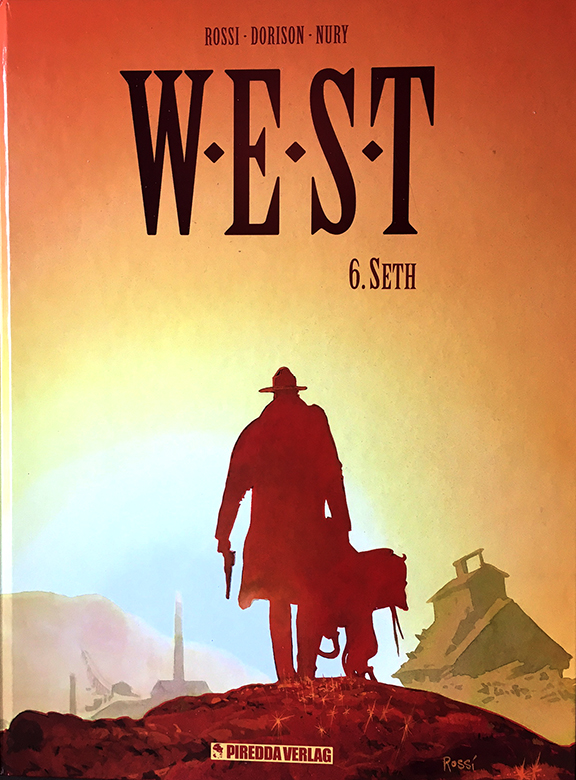 
American Comic Book Writer And Editor,
Jeff Mariotte Weighs In
"The heyday of Western comics in the US ran from the 40s into the early 60s. By the late 60s, the revisionist history vogue was going strong. I'm not putting down that revisionism--in many cases, it was just telling the story more accurately--but it served to de-mythologize the Old West for a lot of people. Anti-heroes were big, too, so the heroic western characters we grew up with were relegated to the backseat. Think about the western movies of those days--for every Butch & Sundance or Jeremiah Johnson, there was a Little Big Man, Missouri Breaks, and the Altman's Buffalo Bill & The Indians movie discussed in the current True West.
"That didn't happen so much in Europe. Their cultures are old enough that they've probably already dealt with their revisionists. When I was a kid in France in the early 1960s, everyone I met assumed my family were cowboys. To correct that impression, I told them I was from Chicago, which changed their assumption to gangsters. We attended an event around '63 or '64 called--if memory serves--"Trois Jours a l'Americain," which purported to be a recreation of American life, but it was almost all cowboys and Indians. 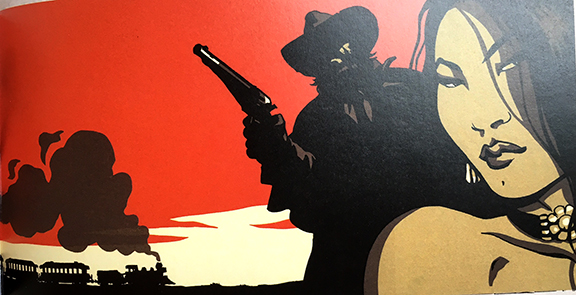 An In-din Miss Kitty from the German series, Der Stern Der Wuste.
"When I lived in Germany in the early 70s, there were still plenty of Western comics (and other genres--it wasn't just Westerns that disappeared here, but also romance and horror and medieval, etc.; the lack of Westerns was notable because they had been such a big part of the market for so long, but superheroes were already taking over). In any given week, you could find Western movies playing in German theaters. Not very good ones, but the mythology still lived over there.
"It wasn't just comics, either. Think how prevalent TV Westerns were into the mid-60s. By the early 70s, how many were left? But we're talking comics, here, so I digress.
"Comics boomed in the late '80s-early '90s, but that boom was almost entirely superhero-driven. By the time I created Desperadoes at Image Comics in '97, there were no major-publisher Westerns on the market (and if there were any in the small presses, they were well hidden).
"Now fast-forward 20 years. The people making comics are mostly in their 20s and 30s. When they grew up, comics were all superheros, all the time. Sadly, most of the creators in the comics biz don't have much frame of reference outside of comics, and when they do it's usually movies and TV. Nobody who came of age after the mid-'60s had the experience of seeing Westerns as a big part of the comics market. And to exacerbate that, the sale of comics shifted from newsstands to specialty stores during that same era--the early 70s and beyond.
"Since Desperadoes, there have almost always been one or two Westerns on the market here, and there continue to be now. But those are outliers, with marginal sales at best. Nobody's getting rich writing Western comics in the US. Desperadoes always did pretty well overseas. It had multiple translations, and I got fan mail from France, Spain, Germany, Italy, Wales, etc. Here in the US, though, it was always touch-and-go.
"So my operating theory is basically this: In the US, we de-mythologized the Old West, which made it harder to sell heroic stories in that setting. And we know what today's West is like. In Europe, the mythical West remains a more universal image of what the American West was and is than it does here, whereas comics about contemporary American superheroes dealing with contemporary American situations are of less immediate interest than they are here.
—Jeff Mariotte

"Because too much focus placed on too few historical events. We need new definitions and new stories."
—Vince Murray
Posted by Bob Boze Bell at 12:04 AM