September 6, 2018
Going up the hill this evening to talk to the Prescott Westerners Corral about this guy:

"He Sold The Buttons Off His Coat" 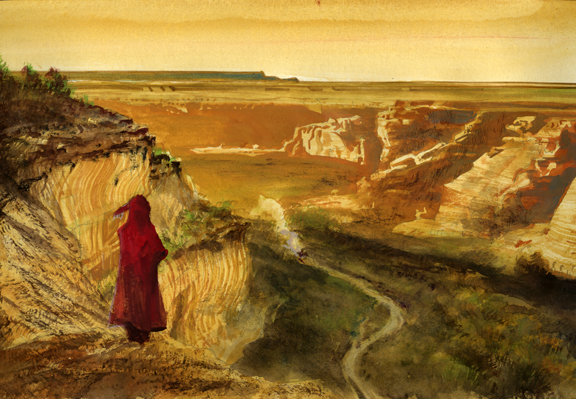 Geronimo Cashes In
In May of 1904 Geronimo is invited to the Louisiana Purchase Exposition being held in St. Louis. He's offered a dollar a day, but settles on $100 a month. He stays at the fair for six months.

“I sold my photographs for twenty-five cents, and was allowed to keep ten cents of this for myself. I also wrote my name for ten, fifteen, or twenty-five cents, as the case might be, and kept all of that money. I often made as much as two dollars a day, and when I returned I had plenty of money—more than I had ever owned before.”
Geronimo is accompanied everywhere by two armed soldiers, who stand on either side of him. The effect creates the aura that the warrior is still dangerous even though he is 76 years old. In spite of, or, perhaps because of, the “prisoner of war” trappings, Geronimo is becoming quite a celebrity, and as he puts it, “Many people in St. Louis invited me to come to their homes, but my keeper always refused.”
“I am glad I went to the Fair. I saw many interesting things and learned much of the white people. They are a very kind and peaceful people. During all the time I was at the Fair no one tried to harm me in any way. Had this been among the Mexicans I am sure I should have been compelled to defend myself often.”

March 5, 1905
Geronimo is invited to ride in Teddy Roosevelt’s inaugural parade. The army gives him a check for $171 before he leaves (to pay for traveling expenses, etc.). Geronimo takes the check to Lawton, deposits $170 in his bank account and leaves for Washington DC with $1 in his pocket. He is not in need of cash though—all the way to the capital, at every stop of the train, he sells his autographs as fast as he can print his name. When he runs out of photographs, he sells his hat, then the buttons on his coat. When the train leaves the station, Geronimo pulls out his suitcase and sews more buttons on his coat, and buys a new hat for the next stop.
When he gets to Washington the G-Man is asked where his horse is, and he tells them they will find him one. They do.
The inaugural parade moves along Pennsylvania Avenue with Teddy in the lead, doffing his silk hat and grinning his big-toothed grin. Next comes the army band and then come six “wild” Indians (this was supposed to be a “before” and “after” demonstration with the “wild” Indians followed by a unit of well-dressed, disciplined Carlisle cadets, showing off the government’s success in guiding the Indians to “civilization”). The “wild” party, and Geronimo in particular, steals the show. No one even takes a picture of the Carlisle cadets—or remembers them in the parade. Geronimo is a huge hit and holds himself erect, completely calm and self-possessed. Men along the route throw their hats in the air and shout, “Hooray for Geronimo!” and “Public Hero Number Two!” A disgusted Woodworth Clum (son of former Apache agent John Clum) has been on the inaugural committee, and he takes the opportunity to ask Roosevelt, “Why did you select Geronimo to march in your parade, Mr. President? He is the greatest single-handed murderer in American History.”
“ I wanted to give the people a good show,”

March 9, 1905
Geronimo and a group of old-time warriors visit the White House. This is his chance to appeal to the highest authority for a return to Arizona. His appeal, interpreted by George Wratten is touching: “...When the soldiers of the Great White Chief drove me and my people from our home we went to the mountains. When they followed us we slew all we could. We said we would not be captured. No. We starved but we killed. I said that we would never yield, for I was a fool.
“So I was punished, and all my people were punished with me. The white soldiers took me and made me a prisoner far from my own country”...
“Great Father, other Indians have homes where they can live and be happy. I and my people have no homes. The place where we are kept is bad for us...We are sick there and we die. White men are in the country that was my home. I pray you to tell them to go away and let my people go there and be happy.”
“Great Father, my hands are tied as with a rope. My heart is no longer bad. I will tell my people to obey no chief but the Great White Chief. I pray you to cut the  ropes and make me free. Let me die in my own country, an old man who has been punished enough and is free.”
Teddy Roosevelt answers him with compassion, tinged with hard-nosed political reality: “...I do not think I can hold out any hope for you. That is all I can say, Geronimo, except that I am sorry, and have no feeling against you.”

June 11, 1905
The National Editorial Association holds its annual convention in Guthrie, Oklahoma. An excursion by train  brings the visiting editors to the 101 Ranch where they witness “the tiger of the human race” and “the Apache terror” in person.
Geronimo is the main feature of the morning events and he shoots a buffalo (provided by Charles Goodnight’s JA ranch in the Texas Panhandle) from a fast-moving car. This is where the photograph of Geronimo behind the wheel of a Cadillac is taken. The buffalo meat is served to the guests in the afternoon. 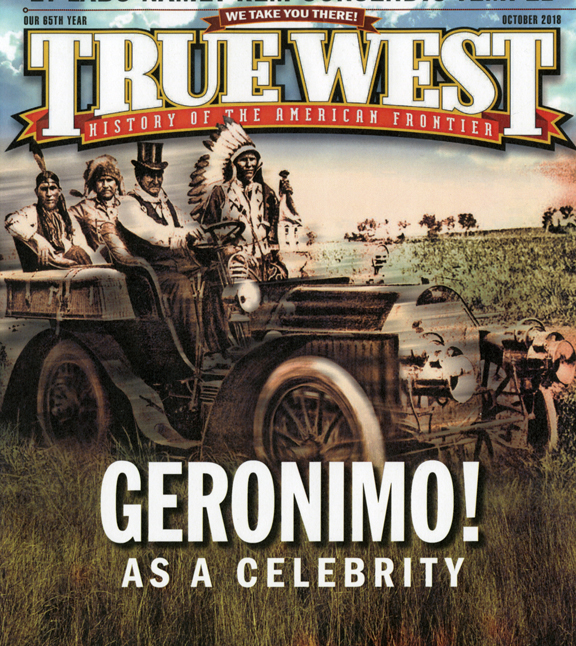 (Yes, this photograph is where Michael Martin Murphy got the inspiration to write the song.)

October, 1905
Lawton School Superintendent Stephen M. Barrett approaches Geronimo about writing his life story. Geronimo agrees on the stipulation that Barrett can ask no questions. Geronimo also refuses to be questioned about details or to add another word. He simply says, “Write what I have spoken.”
After striking a deal with Geronimo (the wily old horse trader will get half of anything the author gets), Barrett tries to get the army’s permission, but the officer in charge, George A. Purington, bluntly refuses, saying Geronimo should be hanged instead of being “spoiled by so much attention from civilians.” Barrett finally appeals directly to President Teddy Roosevelt, and after a series of communications through channels (five pages of fine print, ten endorsements and six weeks of bureaucratic paper shuffling) permission is approved on the stipulation that the manuscript be submitted to the army before publication.

July 4, 1907
After attending a parade and picnic in Cache, Oklahoma, Geronimo starts home in the evening but turns south and hides in the timber (speculation is that he was drunk). The newspapers have a field day reporting he is on his way to join the still-hostile Apaches in Old Mexico (he’s eighty four years old!) The soldiers find him the next day and bring him back to Fort Sill.

February 12, 1909
Not far from Geronimo’s house, Mrs. Jozhe sees his horse saddled on the bank of a creek. She and others investigate and find Geronimo lying partly in the water. They deduce that he was thrown from his horse on the ride home and has been laying in the cold water, unconscious, all night.

February 15, 1909
A severe cold has turned into pneumonia. One of the scouts has told the post surgeon, who sends an ambulance to Geronimo’s house. The bedridden war leader is surrounded by about a dozen Apache women who refuse to let him go to “the death house,” which is the Apache name for the hospital. Finally, returning with a scout, the ambulance brings the old warrior in. The post surgeon expects him to die within the next few hours, but Geronimo asks that his son Robert and his daughter Eva be brought from Chilocco.

February 17, 1909
For two days his strong spirit has refused to give up until he could see his children one more time. They have not arrived. Now, at 6:15 a.m. he closes his eyes and surrenders for the last time.

February, 18, 1909
The funeral is at three o’clock. The army grants a half-day work furlough for the Apache men so they can attend. Robert and Eva finally arrive by train and the funeral procession starts for the cemetery.
Before the grave is filled, relatives solemnly place his riding whip and blanket in the casket. (Before he died, Geronimo told his wife to tie his horse to a certain tree and to hang up his belongings on the east side of his grave, and in three days he would come and get them.)
When his bank account is checked in Lawton, it is revealed that Geronimo had more than ten thousand dollars in the bank at the time of his death! It turns out the old boy had cashed in on his fame (in today's money, this would be more than a quarter million dollars). 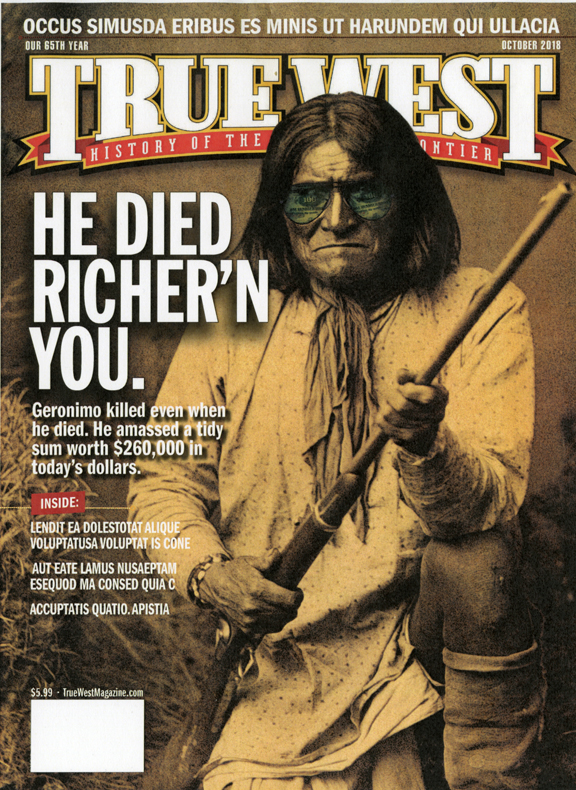