The Case Against Geronimo

September 11, 2018
Imagine a time in the future when Osama bin Laden is enshrined as an American hero.

If that sounds ludicrous—and it should—this is exactly how the majority of people living in the United States in the 1880s would feel if they could witness how we currently view Geronimo. 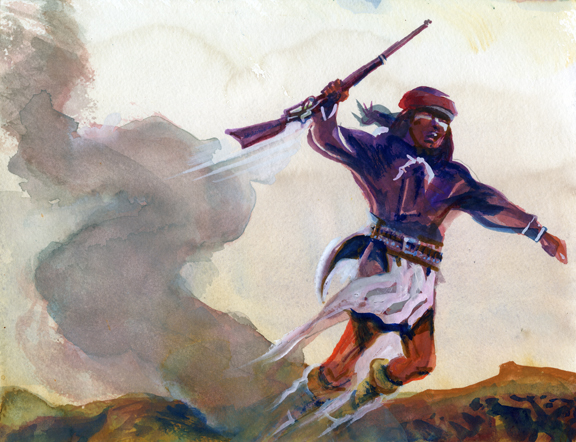 The Case Against Geronimo
This is not easy to write because I know it's going to upset many of my Native American friends, but it must be said.

Geronimo had many fine traits, bravery and adaptability being among them. But the warrior had a few ugly traits that make it hard for me to admire or accept him as an American hero.

When, late in life, he was asked if he had any regrets he replied, "I wish I had killed more Mexicans."

Okay, so not only was he a racist, but a racist killer. How many Mexicans did Geronimo kill in his lifetime? If you have read his autobiography, you know the number must surely be in the hundreds, if not the high hundreds. Were many of these soldiers or individuals who were trying to kill him? Yes, of course, but many were, by his own admission, merely in the wrong place at the wrong time. That is to say, people living on their land and farming it, for example. Was it Apache land? Sometimes. But more often than not, the Apaches were on long range raiding parties, deep into Mexico. In other words, a long way from their homeland.

The G-Man had serious issues with alcohol. The peace parlay with General Crook in 1886 went south because Geronimo, Naiche and their warriors bought whiskey, got roaring drunk, set the grass in their camp on fire and Naiche shot his wife in a drunken stupor. Perhaps embarrassed and no doubt hung over, they bolted the peace talks and went on a barbaric rampage killing dozens of innocent men, women and children on both sides of the border.

Here is how my hometown newspaper, the Mohave County Miner, covered the carnage on May 30, 1886:

"Geronimo still continues his savage and murderous depredations, and the chances of his capture seem as remote as ever. Mexicans and Americans, old and young, helpless woman and tender child, alike fall victims to his unsparing barbarities, and our great and glorious Government is apparently unable to cope with the emergency."

The constant raiding and the murders of innocent people were not done in a spirt of protecting their homeland, they were made to take other peoples stuff, and lives. Granted, they were no different than the Vikings or the Huns, but they were not freedom fighters fighting for their homeland. They were, in fact, fighting for their way of life, which was a way of life that depended on killing and stealing from anyone within striking distance. 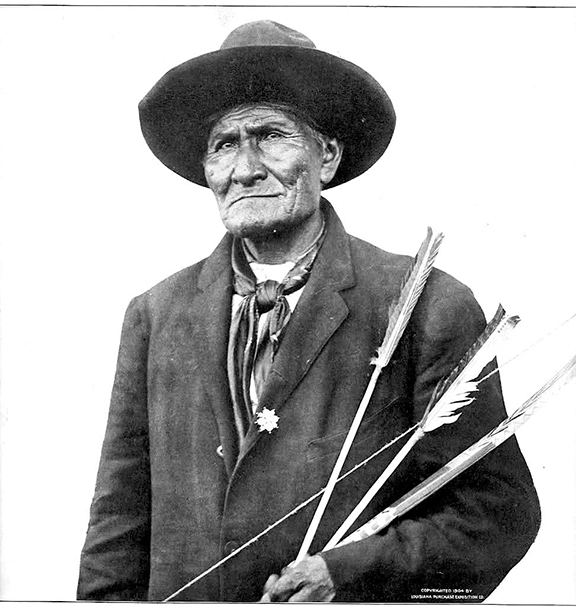 Geronimo 1904
From terrorist to freedom fighter?

After the successful raid that killed Osama bin Laden, we ran a cover story that answered this very question: 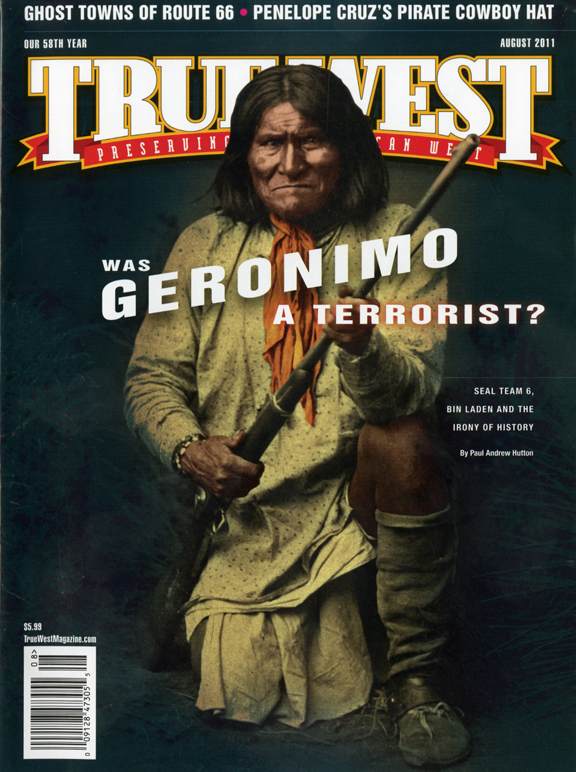 Paul Andrew Hutton wrote the cover story, and in it, he tracked Geronimo's incredible transition from villain to hero. By the way, according to Hutton, the last negative portrayal of Geronimo was a Disney film, "Geronimo's Revenge" filmed in 1960. After than, Hutton notes "Hollywood screenwriters joined their literary cousins in portraying the Apache warrior as a heroic defender of native rights against the duplicitous white invader."

Hutton wraps up his brilliant commentary with this: "The U.S. government, in what might easily be viewed as acts of more hypocrisy than contrition, honored Geronimo with a 1993 postage stamp. A February 2009 U.S. House resolution declared him a 'spiritual and intellectual leader' who 'led his people in a war of self-defense.'"

And then: "So the transition from bloodthirsty terrorist to patriot chief is complete. Now officially sainted as a native 'spiritual and intellectual leader' by the U.S. Congress that had once sent a quarter of its military forces to destroy him, Geronimo—'He Who Yawns'—has certainly had the last laugh. Peace to his bones—wherever they are."

My prediction is that a similar transition looms out ahead of us, and it's coming whether you believe it, or not. It may not be Osama bin Laden that someday turns from a hated enemy into an American hero, but I can guarantee you it will be someone equally as appalling to our current sensibilities.