The Contradictions We All Live With

February 16, 2019
So, I have been working on a graphic novel for some time now, but I find myself battling with a familiar demon: word balloons. 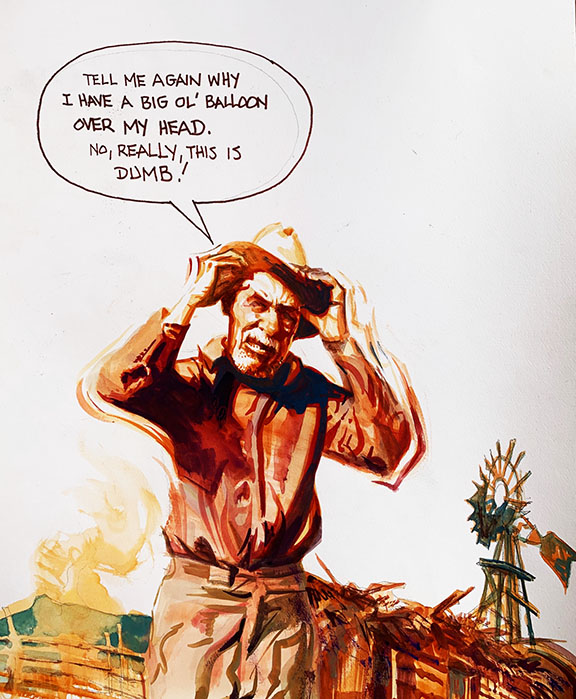 Grumpy Gus:
"Tell me again why I have a balloon
hovering over my head?"

Word balloons arose from convenience: using captions makes it hard to know who's speaking in a panel with multiple figures, unless you go with "George said" and "Sally said." Word balloons are a convention that everyone who reads comics understands, and used wisely, they not only convey dialogue but carry the reader's eye through the panel and even through the page--look at some well-placed balloons, and you'll see how they direct you, sometimes breaking panel borders to guide you to a panel that might not seem like the next natural one to move to.

That said, there are all kinds of word balloons. Sometimes they don't have to be more than a line coming from the speaker's mouth and a line under the dialog to distinguish it from the rest of the art. They don't all have to be white, outlined bubbles, although that is the standard.

Another thing to consider is that almost nobody does them by hand anymore. They're usually added in Illustrator, after the art is done, and the lettering's done on the computer. Many of the best letterers create their own fonts, using their own lettering styles, so their own art form shows through (and it is an art). They know how to minimize the impact on the art, making sure that what needs to be seen, is seen, and like I said, guiding the reader's eye.

If you are using balloons, it's important to remember that as you're laying out the page, so you leave space. That's one of the reasons a script is to important--because the artist has to know which panels he needs to leave a lot of room in, and which ones he can fill up with pretty pictures.

I've never done lettering on Illustrator, but I know plenty of people who do. And I'm very good at balloon placement.
—Jeff Mariotte

Good advice from a good man.

"The desire to belong and the need to stand apart are the two contradicting impulses driving fashion."
—Thessaly La Force

"Just so you know, elephants really like 'Funk 49'."
—Joe Walsh relating to Conan a sound check at the Portland Zoo when an elephant started dancing to "Funk 49"
Posted by Bob Boze Bell at 2:52 PM