August 8, 2019
So I'm driving home the other night, minding my own business, and I spot this big hole in the clouds with the sun shining through like a spotlight on a leaning saguaro. In the old days, by the time I pulled over and retrieved my camera (assuming I had it with me), it would have been gone, but not today with my trusty phone. Gotcha! 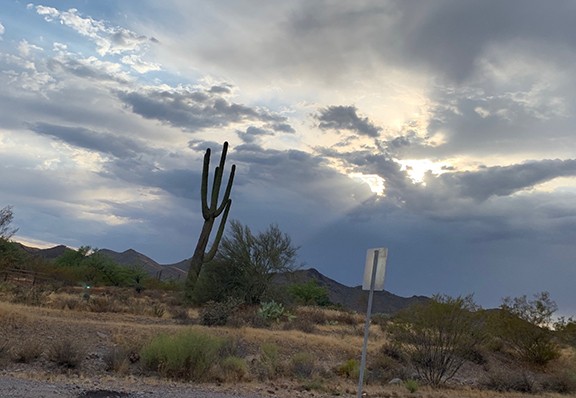 A Hole In The Clouds Where The Sun Shines Through

Yesterday, my production manager, Robert Ray, finally found the missing photograph of the brush arbor where Geronimo was converted to Christianity at Fort Sill, Oklahoma, in 1903. I need this for the book and I knew we had it somewhere. Leave it to Robert Ray to track it down in our massive True West archives. 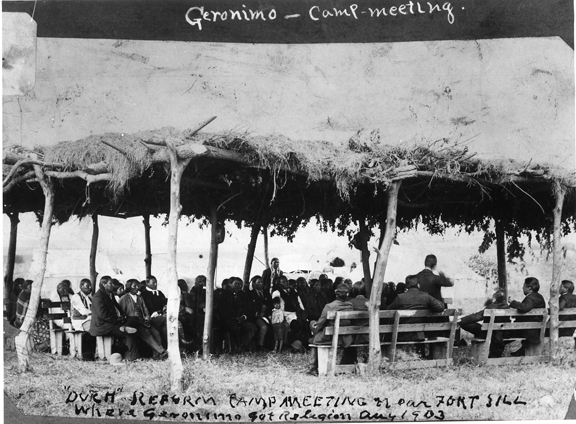 I sent it out for confirmation and got this interesting reply from historian and author Michael Farmer:

"Thanks for sharing the photo, but I’d be slow to trust that it is what it says it is. The story Angie Debo tells (page 431 in the fourth printing) is that the revival meeting was in a tent, that Geronimo, who was in bad way from being thrown from Zi-yeh’s pony and whose back was so bad he was barely able to sit his horse, showed up the afternoon of the first revival day, a Sunday, and claimed he wanted a “better road”, that he listened to the services and the stories of his Christian friends about what Christianity meant to them for the week, and at the last service, which normally was on Sunday evening, he accepted the faith. Also note that elsewhere Debo says that in the tent was a stage where the song leaders, interpreters, and minister stood. I don’t see that here."
—Michael Farmer

And, so it goes. Photos are often back-dated to fit the historical occasion, either by the person who took the photo, or, even an anonymous bystander who WANTS it be THE "Geronimo camp meeting." Either way, it's still a cool picture and I will run it in the book with the disclaimer from Mr. Farmer. That way, you can decide for yourself.

"Do not regret growing older. It is a privilege denied to many."
—Old Vaquero Saying