August 5, 2019
Note to self: in order to learn new things, you need to leave the house. 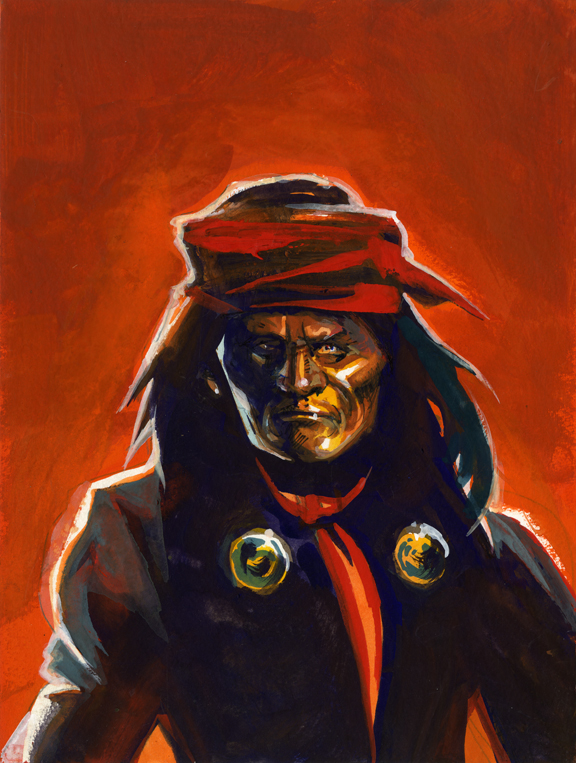 Daily Whip Out:
"Geronimo Is Slightly More Than Ticked Off"

Note the rich—and deep—background on this goauche painting. I discovered this effect after a visit to a well known artist's studio in Pine, two weekends ago, when we were up in Payson for the True West Writer's Retreat.

Stuart Rosebrook, Sherry Monahan and I were invited to visit Bill Ahrendt's impressive studio(s) on the Sunday after the Payson Book Festival. It was a thrill to actually see the artist in his habitat and have him show us around his multi-tiered studio (he has at least six different spaces on his property for the various aspects of making art, all of them he built himself).

When he was 25, Bill trained for ten years in Germany and Italy and is fluent in German. 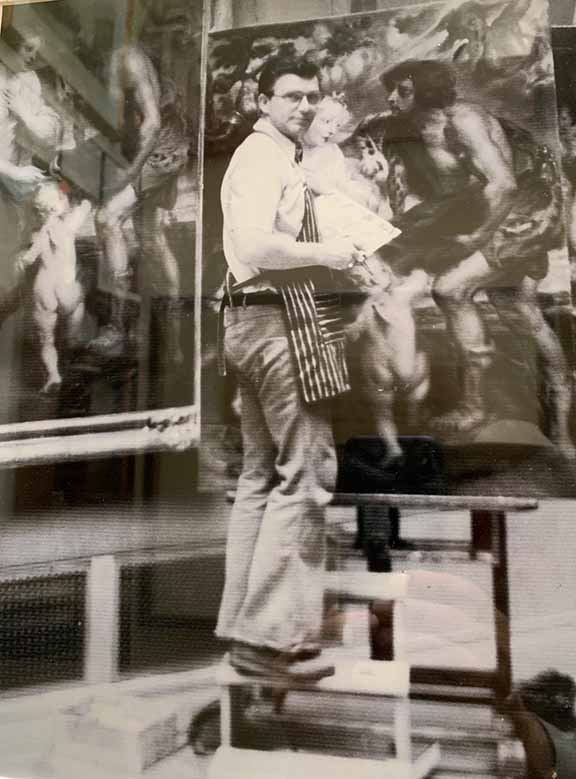 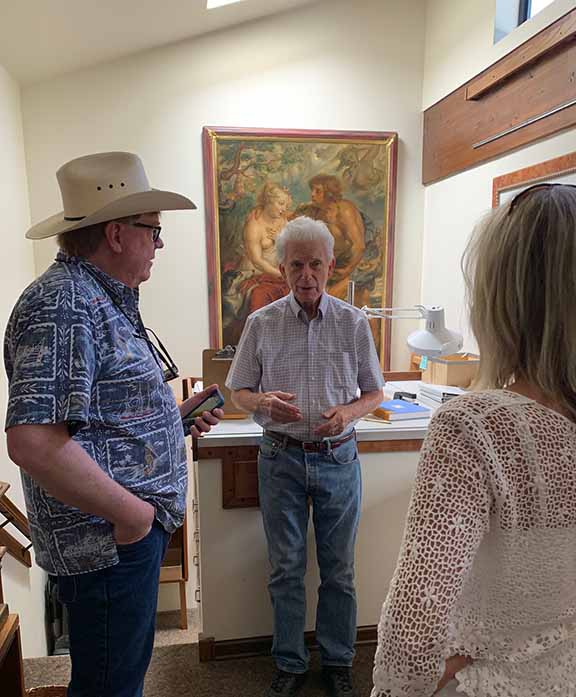 And here is Bill, above, holding court, with Stuart Rosebrook and Sherry Monahan, in front of the masterpiece—of a masterpiece—he was painting in the black and white  picture.

Bill schooled us on learning the craft of art from the ground up and subsequently, because he believes store bought tubes of paint are so inferior, he makes his own paints! 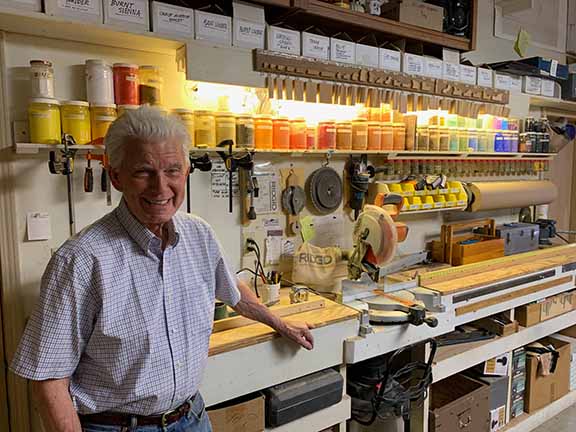 Bill Ahrendt makes his own paints!

Here is Bill with his latest painting. 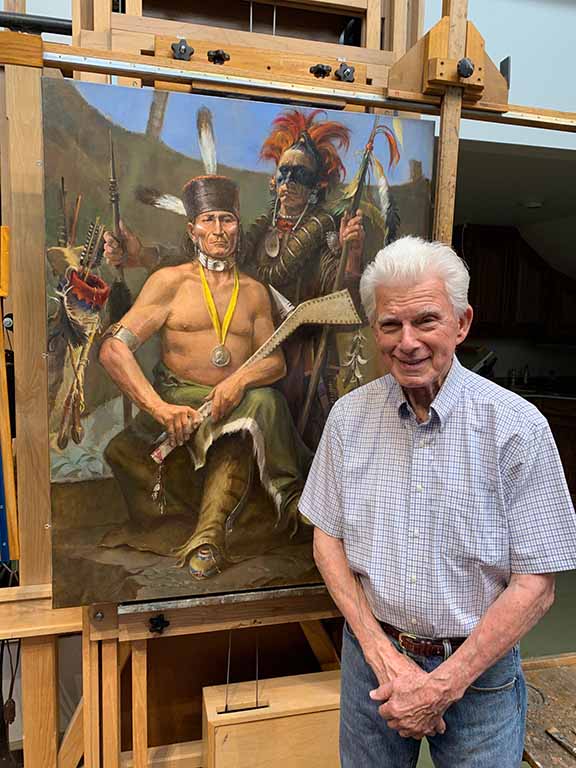 Bill with his latest painting

Bill is a teacher at heart, so he just couldn't help himself by teaching us about many things while giving us the tour. For example, on a tray next to one of his art desks was this little study. 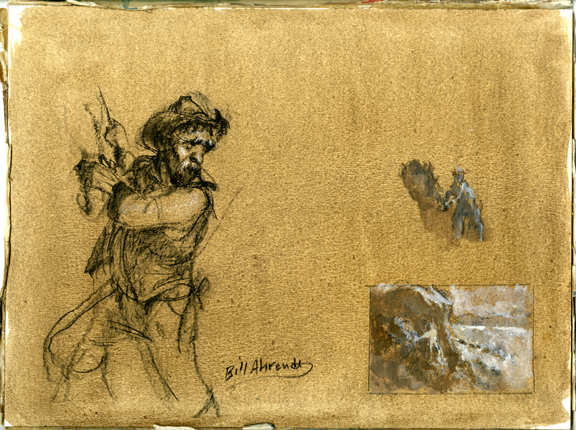 When I questioned him on how he achieved that golden patina background he told me it is merely oil paint—sepia—heavily diluted with turpentine and then applied on watercolor paper. Wow! Really? You can do that? Use oil paint on watercolor paper as a ground?! I would have NEVER thought of that in a hundred years.

Like I said, sometimes you need to leave your house! 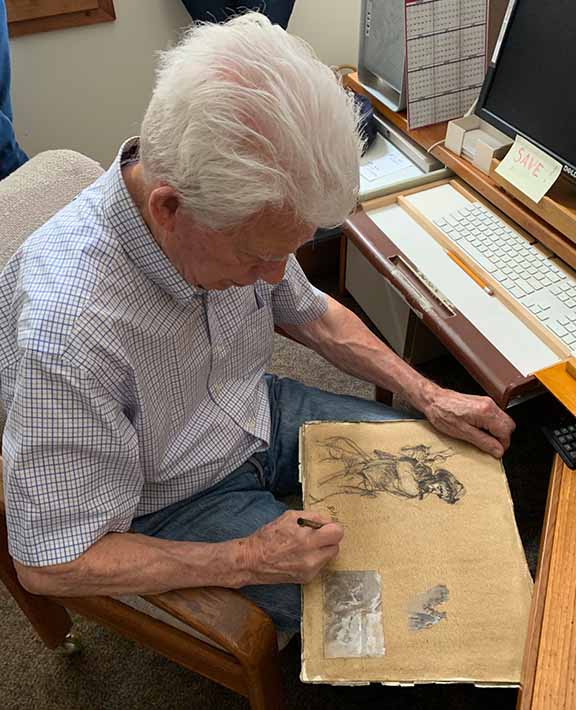 "Yes you can do that," Bill said,
as he signed the study and gifted it to me.

A generous artist he is, in more ways that one. The original artwork is at the framers even as you read this.

So, I came home and broke out the oil paints. Something I haven't done in a decade, or so. I laid down a whole series of grounds and then let them dry. Of course, this is one of the reasons I stopped doing oil painting, because I couldn't afford to wait around for ten days while the damn paint dried! but if we're talking ground, well, I am so in on this, it's not even funny. 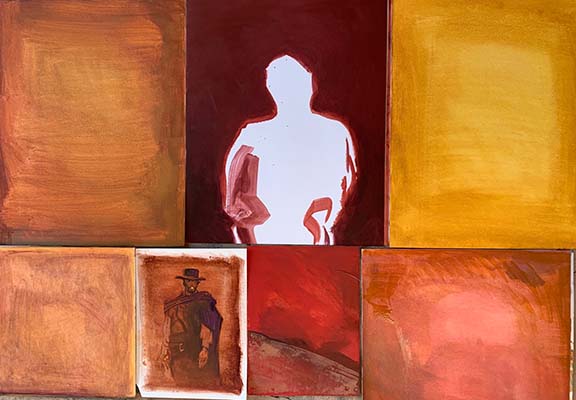 "Get off your phone and leave your house."
—Damned Good Advice
Posted by Bob Boze Bell at 7:08 AM