August 27, 2019
We finally had a vote on which Geronimo image to use on the cover this month (November issue) and the never-before-published photo won by a wide margin.

Meanwhile, went home for lunch to finish a scene I have been dying to do for the book: 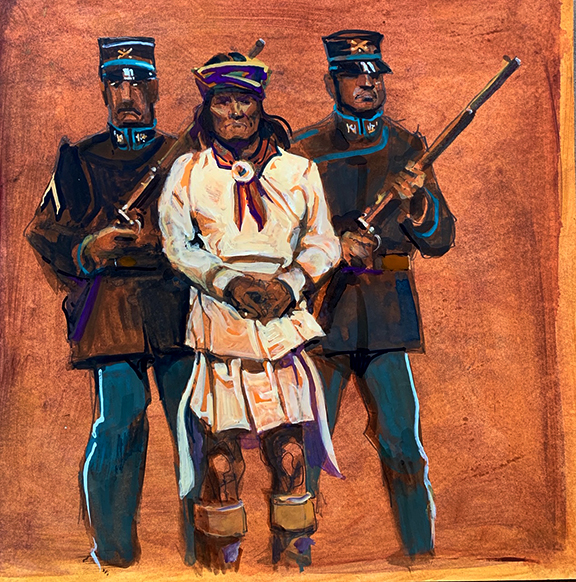 While a prisoner of war being held at Fort Sill, Oklahoma, Geronimo was invited to the Louisiana Purchase Exposition in 1904. The Army brass said he could go, but someone up the chain of command insisted he have two armed soldiers with him at all times. The effect on the large crowds who attended the exposition was to make Geronimo still look dangerous and his celebrity grew by leaps and bounds from this unintended reaction by the public. It turned out to be a P.T. Barnum style level stunt that created a bonfire of interest and sent the G-Man's household name factor through the roof.

Meanwhile, several people—my own daughter, among them—have cringed whenever I use the term "In-din." Isn't it kind of "insensitive," my daughter wants to know.

Okay, valid question and one I think I need to clarify at the beginning of the Geronimo book. To me Indian is a dumb word created by Europeans who thought they were in India. And Native American just takes you out of the Old West so fast it makes your head spin. So, I agree with this prominent In-din:

“We are Indians. That has nothing to do with Indians from India. We are not American Indians. We are Indians, pronounced In-din. It belongs to us. We own it and we’re not going to give it back. So much has been taken from us that we hold onto the smallest things left with all the strength we have.”
—Sherman Alexie

This prompted the following exchange with the Top Secret Writer:

BBB: Yes you need to address this up front--in fact you should quote Sherman Alexie in a page before contents. In-din is cute by half and no one who is not from Indian country (and even then must hang with Indians) gets the inside joke implied. Drop it. But of course use Indian.
—Paul Hutton

Sorry, but I cannot use the stupid term Indian because it's so wrong, and, well stupid. It's time to at least make an effort to use a new word and In-din is their choice, so that's what I'm going with. But I will site Sherman A. up front. Thanks for that valuable suggestion.
—BBB

Well, its not stupid even if its ironic (a sort of joke on everyone), and it is part of the AMERICAN language. Like buffalo for bison. But whatever. Nice piece on Thom Ross in Sundays ABQ Journal by Ollie Reed. I assume you can access online. Ross is even crankier than you.
—Paul Hutton