Back to Bass Reeves On The Hunt

Wrapping up our big Bass Reeves package and had another chance to delve deeper into the adventures of this amazing lawman.

Daily Whip Out: "Bass On Guard"

Often on his forays into the In-din Territories, US. Marshal Bass Reeves and his crew would round up as many as 17 fugitives and criminals which they then had to guard every night on the return trip to Fort Smith. When they stopped to camp, the prisoners were shackled to the wagon tongue of the chuck wagon and had to be guarded all night. 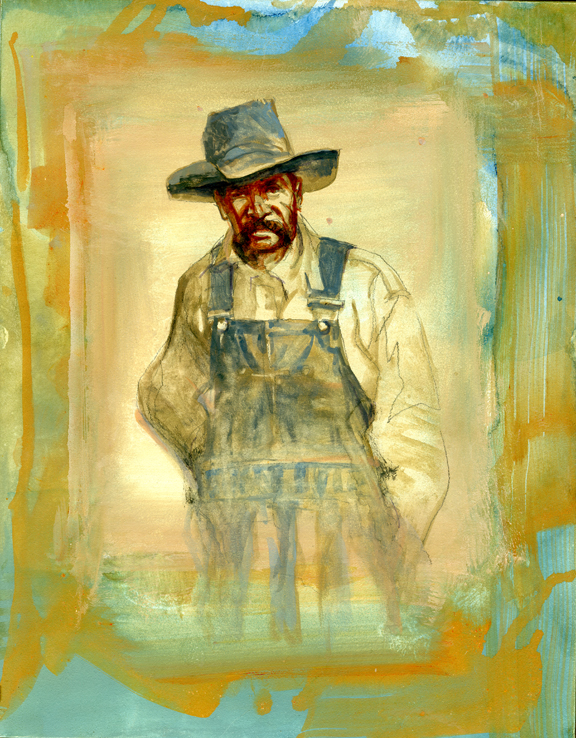 Daily Whip Out: "Bass The Farmer"
The Master of Surprise And Disguise
Bass Reeves preferred to arrest bad men by surprise to cut down the likelihood they might fire on him. According to Reeves' biographer, Art Burton, Bass "did this in many different ways. From riding up on felons before they woke up in the morning, to using his many disguises and totally catching them off guard." Supposedly, one of Reeves' effective undercover disguises was to dress as a dirt poor farmer and pretend to be harmless. Shuffling literally into an armed camp with his hands in his pockets, Bass invariably got the drop on his unsuspecting prey—sometimes more than one! With over 3,000 arrests to his credit, his achievements at surprise and disguise are unparalleled and unmatched. Later in his career, Reeves trained many young deputies who worked the Indian Territory.
Aftermath
During Judge Parker's 20 year tenure on the bench in Fort Smith, some 75 to 100 deputies died in the line of duty. Bass Reeves made, on average $400 a trip and his biggest haul was bringing in 17 prisoners with a fee of $900. 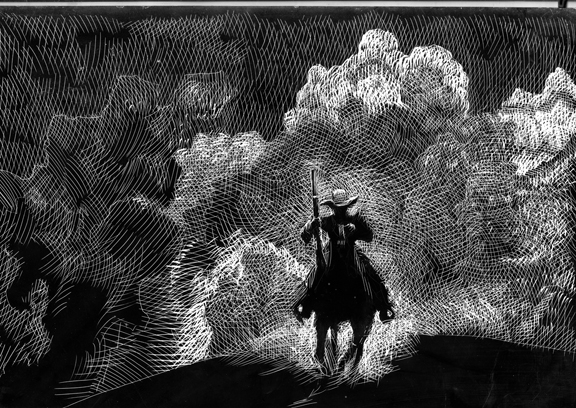 Daily Scratchboard Whip Out:
"Bass Reeves On The Hunt"
The U.S. Attorney General estimated that of the 20,000 whites living in the Indian Territory during the time Reeves was active, only 5,000 were law abiding. Judge Parker, known as "The Hanging Judge" actually hanged 30 Whites, 26 In-dins and 23 Blacks. 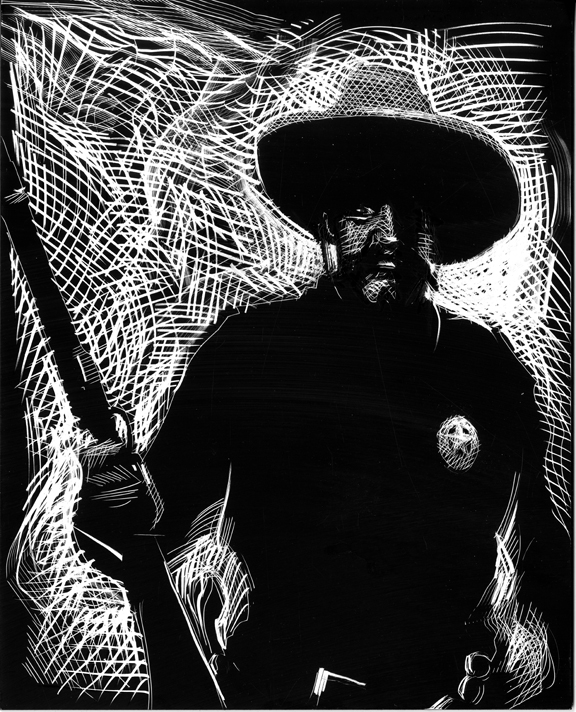 Daily Scratchboard Whip Out:
"Bass With His Trusty Rifle"
"He could shoot the left hind leg off of a contented fly sitting on a mule's ear at a hundred yards and never ruffle a hair."
—Oklahoma Yarn About The Shooting Prowess of Bass Reeves
Posted by Bob Boze Bell at 9:16 AM