Why Would I Do Another Piece of Kid Art When The Book Is Already Printed?

Yesterday at 5:30 P.M. I did my first Facebook Live event. It was a tad bumpy, but, thanks to Ken Amorosano and his tech support, I survived it. Here is a link if you want to take a gander.

BBB Spills His Guts On The Kid

As I was getting my studio ready for the event, I was cleaning off one of my desks and discovered a half-finished pen and ink drawing that I had intended to use for BtKIII but time ran out and it didn't make it into the book. So, obviously I filed it away for another time and got back to work on finishing the cleaning.

Oh, of course not! That would be so focussed and responsible. No, I gave it a good wash, then finished it this morning. Here's the setup.

Four men stood over the lifeless body of Billy the Kid, as he lay bleeding out on the carpet of Pete Maxwell's bedroom floor. Left to right: Pat Garrett, Tip McKinney, John Poe and Pete Maxwell—who wasn't real happy about the rug. Garrett, meanwhile, had some 'splainin' to do. He was once a fast friend of Billy's. 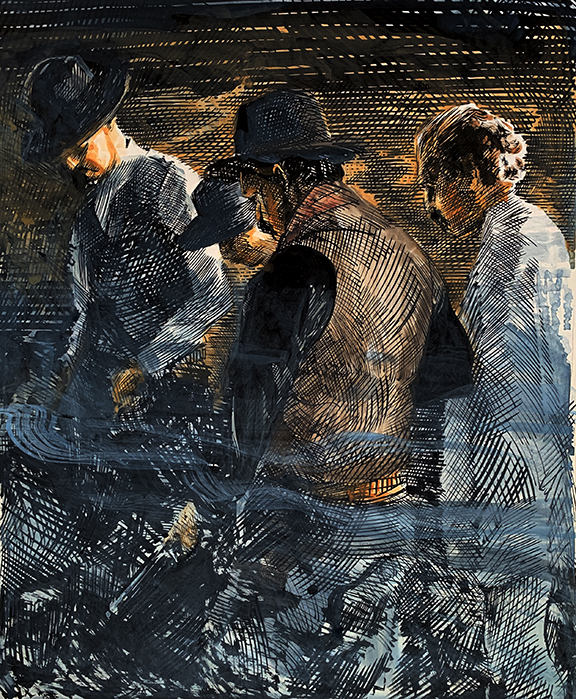 Daily Whip Out: "The Deed Is Done"

Thanks to Janice Dunnahoo, who watched the Facebook Live show last night, she sent me a link to an amazing interview with Igenio Salazar she found.

The Amigo of Billy the Kid

Here is my favorite quote from the article.

"I expected the trail beset with marauding Apaches, but I found the white man more savage and warlike than the Indians."